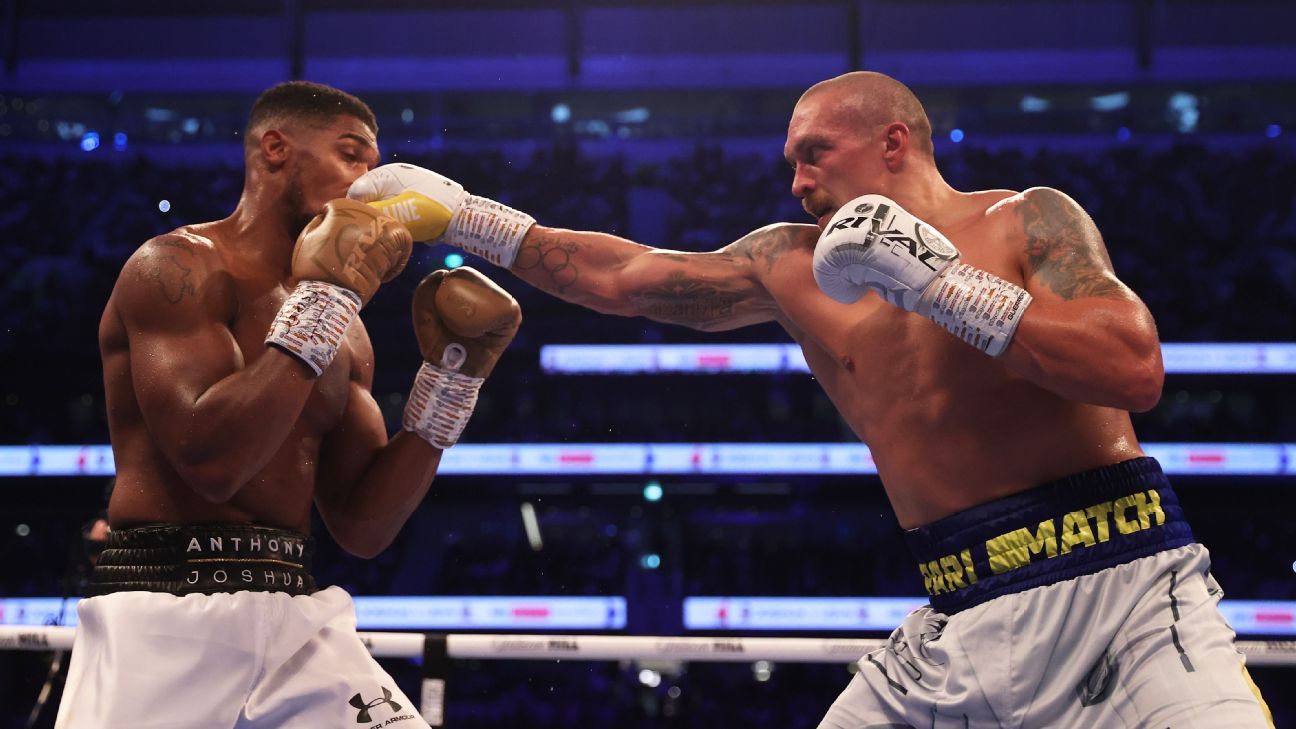 The Ukrainian southpaw won the belts from Joshua through a unanimous points decision in front of the English boxer’s home crowd at the Tottenham Hotspur Stadium in London, England, in September last year.

Due to a rematch clause, Usyk (19-0, 13 KOs), 34, and Joshua (24-2, 22 KOs), 31, will face each other next with the winner left to possibly negotiate a huge fight with the division’s other champion and rival, Tyson Fury, the WBC titleholder, for later in the year.

Matchroom promoter Eddie Hearn, who guides the career of Anthony Joshua, told reporters in a news conference on Friday, “I think April is realistic for that fight. Before you know it, it’s going to be February and these fights take a lot of organising. For us the preferred date and venue for that fight will be the U.K., in which case we would have to do the fight outside, so we’re not really interested in doing that fight in March.

“AJ has been training relatively solidly since the fight. Realistically if you start your training camp in February, even April becomes quite tight but that is the preferred date for the fight and I think that’s realistic.”

Usyk’s camp has said it wants to stage the rematch in Kiev, Ukraine.

But Hearn said: “We’ve had two or three offers from different countries to stage Joshua vs. Usyk but for me after the success of the Spurs fight [in September], other than the result, I would love to do that fight back in the U.K., possibly at Spurs again or at Wembley, because I feel like it’s a must-win for AJ. If we had the opportunity to stage the fight in the U.K. we should do it, and if he can win that fight on that soil it would be pretty special.

“We’ve got the ability to stage the fight where we want but at the same time it has to generate enough money to know that we have done our jobs. Kiev is not the place to generate money, other places outside of the U.K. will be considered. I don’t believe the fight will take place in Kiev.”

Usyk hurt Joshua in the third round and almost finished off the English boxer amid a furious attack late in the 12th round. A second professional defeat has prompted Joshua to review who trains him, after being guided by trainer Rob McCracken since his days as an amateur when he won Olympic gold in 2012.

Hearn said: “We know really where we’re heading from a training perspective, and the set-up for the next fight. It’s not like we’re just floating around not really knowing what we’re doing and AJ has been very meticulous in an approach to setting up that new team.

“AJ made it clear when he said I will be working with a new trainer, and will that be in conjunction with Rob? I think that’s to be announced in the coming weeks.

“If AJ didn’t make any changes and wasn’t comfortable with his approach going into the rematch, I feel like we shouldn’t be taking that rematch but the fact he’s been so proactive and positive and whatever route he goes down, I know he’ll be comfortable with that decision. I’m a lot more at ease than with the flip side, which is leave it. He needs something fresh.”

Joshua’s English rival Dillian Whyte (28-2, 19 KOs), who he stopped in 2015, is waiting to see if he is going to be in the opposite corner as Fury defends his WBC belt, reported to take place on March 26.

The Jamaica-born Londoner, 33, is the official mandatory challenger for the WBC belt after gaining revenge over Russian veteran Alexander Povetkin in March last year. Fury stopped Deontay Wilder in a third meeting in October to confirm his status as the world’s leading heavyweight.

Purse bids for Fury-Whyte are set for next week, but Hearn said: “There is a lot going on legally behind the scenes with Dillian and the WBC. We are not at all happy with the 80-20 split ruling and there is a process now that we have to go through over that to object and that is happening now.

“There aren’t really negotiations going on for that fight because we need to get to somewhere with the WBC where we get where we want, rather than just wait for another ruling. The danger is Fury boxes on March 26 and it won’t be Dillian because the case is ongoing. But that is just to put pressure on Dillian to take a poor deal. If it goes to purse bids then a lot of people will bid, including us. I expect it to be delayed. I don’t see how it can go ahead, with the arbitration case ongoing, but anything is possible.

“I absolutely think the fight will happen, even at 80-20 and it’s not about Dillian’s split, it is about the valuation of the fight and that will help us win the purse bid.”

Among six events confirmed by Hearn and streaming service DAZN Friday was Lawrence Okolie, who is managed by Joshua, making a second defence of his WBO world cruiserweight title on a Sunday next month.

Okolie had a standout 2021 and is looking to gain momentum this year, winning two world title fights, but will have to wait for the chance to unify titles at cruiserweight.

“It’s only a matter of time before Lawrence moves to heavyweight but he needs to unify first,” Hearn said, who believes a fight against rival world champions Mairis Briedis, Ilunga Makabu or Arsen Goulamirian is possible for the summer.

The megafight between Ireland’s Katie Taylor, ESPN’s No. 1 women’s pound-for-pound boxer, and Puerto Rico’s Amanda Serrano, the seven-weight world champion who is based in Brooklyn, is also close to being confirmed for Madison Square Garden, New York, in April, Hearn said.