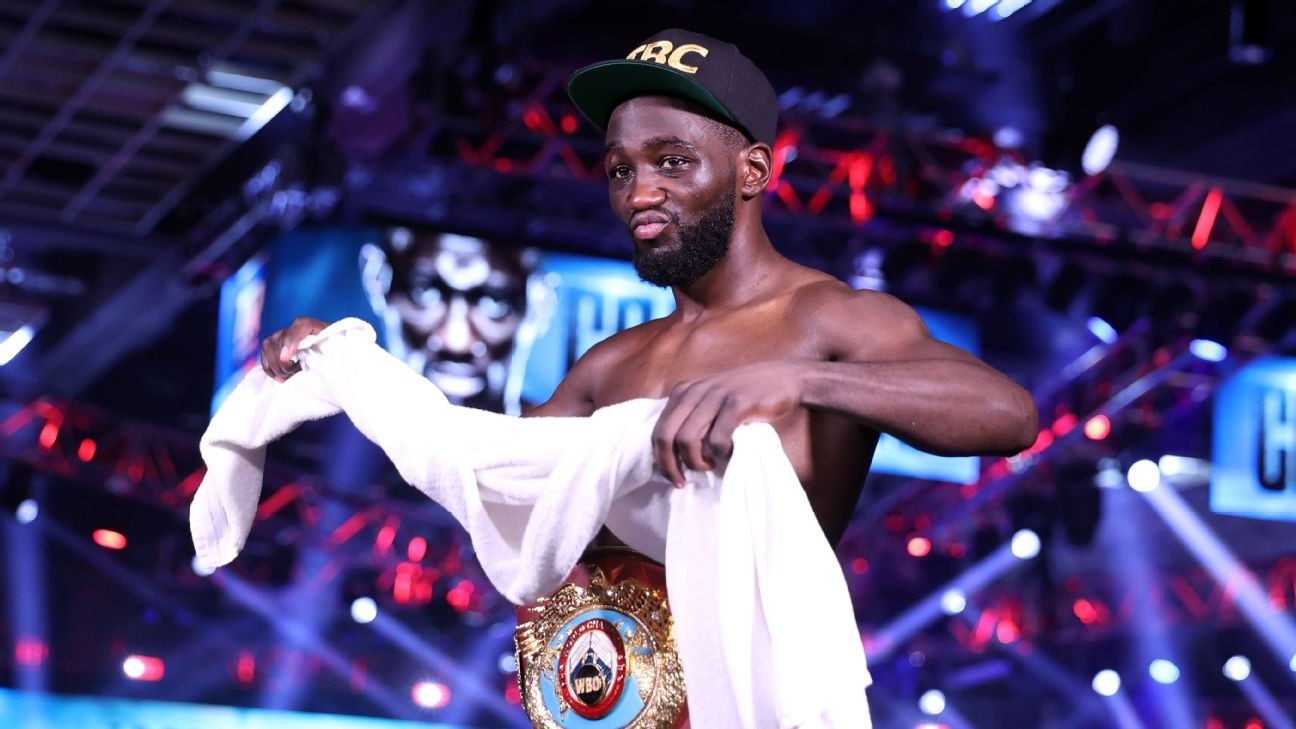 Predicting what could happen in boxing is as difficult as picking a Super Bowl champion before the NFL season even starts. But that doesn’t prevent us from forecasting what the sport could look like in 2022.

Is this the year we see Terence Crawford take on Errol Spence Jr. to finally crown the best welterweight fighter on the planet? Will the Jake Paul train still run at full speed? Could we see a heavyweight champion holding all four major belts?

Terence Crawford will finally have a showdown with Errol Spence Jr.

The real wild card here would be Crawford deciding to strike out on his own and try to find the best possible fights, regardless of promotion. But the reality is Crawford probably should tie himself in with a promotion — and PBC or Probellum makes the most sense if he’s trying to chase the big fights.

Top Rank Boxing is on ESPN and ESPN+. Subscribe to ESPN+ to get exclusive boxing events, weigh-ins and more.

He took care of Porter in November, and if he’s looking to test himself at welterweight, that’s the spot to be. Spence is there. So is titleholder Yordenis Ugas. All of the belts he might try to claim — and all of the big-money fights he might try to make in the division — reside in Al Haymon’s PBC promotion. So it makes a ton of sense for Crawford to go there on a multifight deal, take on the other champs and then see what happens from there. Signing with Probellum will also allow him to face fighters in other promotions.

We saw the attention the Crawford-Porter fight got and how it perhaps brought out the best in Crawford. Why not try to push for that even more against the other top competition in the division? — Rothstein

What’s a modern-day boxing prediction without something mentioning Jake Paul? And for all the criticism around the man with the Problem Bot, what’s undeniable is Paul brings attention to the sport. He has shown some legitimate fighting skills and he’s taking this seriously. How he approached — and knocked out — Tyron Woodley in their rematch was evidence of that.

Paul has become one of the biggest names in the sport and one of the biggest draws. So it has created a conundrum. Where many fighters with five professional fights wouldn’t be on pay-per-view events and wouldn’t face any sort of name competition, Paul almost has to. An argument could be made — and I’ve made it before — that his next step should be to face someone with a pure boxing background, similar to how most young fighters move with their careers.

But Paul isn’t most fighters, which makes this harder. Should he eventually fight someone with a more typical boxing background? Yes. And Tommy Fury, if that fight happens in 2022, would fit that type of matchup. But it has to be a big name — or the type of name where Paul can help lift the intrigue because of other factors, as in Fury’s case. If there isn’t a fight like that out there, Paul — who said after his last fight he’s taking a true vacation — probably should continue the path he’s on, fighting some of the best fighters mixed martial arts has to offer.

If you’re almost any level of fighter in MMA or boxing, why wouldn’t you take a fight against Paul? Lose, and you’re still in the biggest stage of your career with a good payday. Win — become the person to take out Jake Paul — and your star rating becomes something difficult to achieve in the sport otherwise, even for some of its champions. It’s a win-win for a lot of fighters if they — and Paul — are willing to try it out. — Rothstein

None of boxing’s “four princes” fight each other

Once upon a time, four princes descended upon boxing, all youthful and talented, inspired to take on the world — and each other.

Well, like most fairy tales, that wishful thinking was too good to be true. In 2021, there was no bout that featured any combination of Gervonta Davis, Ryan Garcia, Haney or Teofimo Lopez. In fact, Lopez lost his crown after a loss to George Kambosos. Garcia stepped away from the sport to deal with his mental health, and then an injury pushed him out of a bout with Joseph “JoJo” Diaz. Meanwhile, Davis’ stock keeps on climbing.

We’re at the point of the story that boxing fans know all too well — the dreaded “marinating period” where the money people wait until the big-name fights allegedly will make the most financial sense.

Surely, any combination of those fights will create enough buzz to sell tickets for one fight and a rematch, but that doesn’t seem to be on the horizon. Instead, the princes will all remain in their own respective kingdoms. Reality stinks, doesn’t it? — Baby

In some ways this has to be a year that pushes women’s boxing forward. A lot of the top fighters have started to gain more popularity — led by Amanda Serrano, Claressa Shields, Katie Taylor and Mikaela Mayer — and there have been incremental steps toward women’s boxing gaining more attention.

Mayer’s win over Maiva Hamadouche was one of the better fights of the year, men’s or women’s, and Alycia Baumgardner’s vicious knockout of Terri Harper caught attention, as did Serrano’s pummeling of Miriam Gutierrez.

Chantelle Cameron and Kali Reis will fight for the undisputed junior welterweight crown at some point this year. If all goes to plan, Shields and Savannah Marshall will do the same at middleweight in the first half of 2022 as well — a chance for Shields to avenge her only loss as a boxer in the amateurs or pros. And then there’s the big one — Taylor vs. Serrano — which feels inevitable at this point to happen.

Add on to that the potential of Mayer facing Alycia Baumgardner in the second half of the year and more possibilities for Taylor and Serrano to take other superfights as well — perhaps another Taylor-Jessica McCaskill confrontation — and it’s setting up to be the most exciting year in women’s boxing history.

Sure, boxing is boxing and half these fights could fall through, but unlike on the men’s side of things, there seems to be continued interest from fighters in taking on the biggest and best fights. With it could come more attention and bigger paydays. That the potential Taylor-Serrano fight is being talked about to headline at Madison Square Garden is yet another step, as is Matchroom’s consistency signing high-level female fighters.

This year, more than any other in women’s boxing, could offer a chance for the sport to make a push into the world’s consciousness as something to watch. — Rothstein

There will be no Oleksandr Usyk-Anthony Joshua rematch

Joshua learned that Usyk is as menacing as he looks. The wide-eyed, gap-toothed Ukrainian roughed up the British superstar to win three of the four major pieces of the heavyweight title.

And so far, it doesn’t appear as if either man really wants anything to do with the other. Joshua has been spotted canvassing the United States for new trainers. Usyk was most recently ringside at Vasiliy Lomachenko-Richard Commey in December to celebrate Top Rank founder Bob Arum’s 90th birthday.

Joshua’s best chance to remain a financial star in the United Kingdom and beyond is to stay away from Usyk, who showed that smaller, precise fighters can outbox Joshua very well. In fact, Joshua’s best bet is to let Fury, who is promoted by Arum, deal with Usyk.

If Fury handles Usyk, it could reopen the window for that lucrative Fury-Joshua fight that fell apart in 2021. That means Joshua-Usyk II probably won’t happen. — Baby

It’s called bold predictions for a reason, but this one actually shouldn’t be bold. When I reported on this in June and July, everyone appeared on board save for the WBC. The two biggest athletic commissions — Nevada and California — were open to it. Many of the game’s top fighters, including Mikaela Mayer and Claressa Shields, have expressed their interest in it. The other alphabet organizations have also said they would be OK with it, as have promoters, including Top Rank.

So it makes way too much sense and has way too much momentum for it to not happen. If things go well in the first half of the year in some of the bigger title fights, that might be enough of an impetus for female fighters and their promoters to start pushing harder for 3-minute rounds, which could lead to more stoppages, more excitement and, potentially, more cash. — Rothstein

So long, email champion. While many people were not thrilled with how Haney became a lightweight champion (they can thank the WBC for that), Haney still holds one of the four major belts. And because of Kambosos’ upset win over Lopez, Haney has a very easy path to erase any illegitimacy about his standing.

Kambosos has indicated his willingness to fight any of the other big names in the lightweight division, preferably in Australia, where he is from, and should draw very well. Haney, meanwhile, hasn’t enamored large swaths of fans to him during his run. He has plenty of flash inside the ring but doesn’t carry a ton of power, and outside of being wobbled late by Jorge Linares in May 2021, hasn’t been involved in a ton of compelling fights.

A Haney-Kambosos showdown not only seems makeable — Haney is signed with Matchroom, Kambosos with promoter Lou DiBella — but it makes too much sense for both fighters. And it could simplify things in a messy division that has several fights to be made. — Baby

Watching Inoue fight continues to be a master class in boxing precision and power. It might be difficult for him to climb higher than third considering Canelo Alvarez and Crawford are in the top two spots, but there’s opportunity here for Inoue.

In June, Inoue said he wanted to wait out the then-expected fight between Nonito Donaire and John Riel Casimero. That fight, sadly, never happened. So instead, perhaps Inoue sees an opening and takes them out one by one. If he manages to do that in the calendar year 2022, he’d have as good a case as any fighter to the top spot in the pound-for-pound list. He also fought and beat Donaire before — and Donaire is one of only three fighters to go the distance with Inoue. If they were to fight again and Inoue were to knock Donaire out, that would be another point in favor of his being the pound-for-pound No. 1. Inoue has the talent to get there. It’s just a question of whether this is the year for the 28-year-old. — Rothstein

Eimantas Stanionis has the best ’21 of any welterweight

Finally, the welterweight division is getting interesting again. In 2021, Yordenis Ugas sent Manny Pacquiao packing into retirement with a unanimous decision victory. It freed up the most interesting quarter of the 147-pound championships.

Because Crawford and Spence Jr. hold three of the four welterweight belts, Ugas holds the most accessible title in the division. Enter Stanionis.

The undefeated Lithuanian has quietly crept through the weight class in recent years. Since the WBA has Stanionis ranked No. 1, he gets a crack at Ugas’ WBA belt. It would set up Stanionis for a big ’22 if he could win that bout. It would cement his status as a welterweight champion and position him for a potential showdown against Spence, the unified champion who also fights under the Premier Boxing Champions umbrella. — Baby