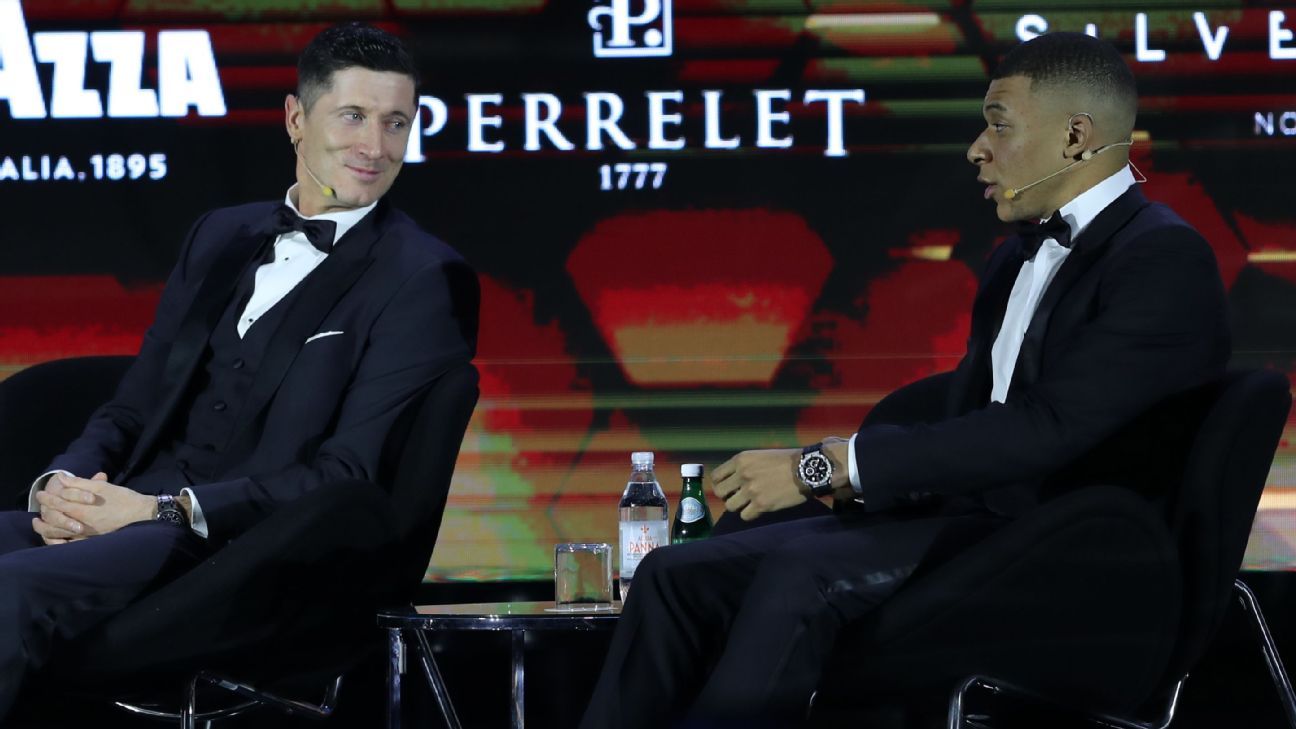 In footballing terms, Kylian Mbappe is a phenomenon. The same goes for Robert Lewandowski. Thomas Delaney stands a chance of helping Sevilla to their first LaLiga title since 1946 while his Denmark teammate, Simon Kjaer, deservedly received a special commendation at this year’s Ballon d’Or ceremony.

A young French World Cup winner, a Pole ripping scoring stats to shreds in the Bundesliga, and two Euro 2022 semifinalists, with Kjaer helping to save teammate Christian Eriksen‘s life at that tournament. Different experiences, playing in four different leagues, disparate ages and personalities.

But they all spoke with one collective voice recently when addressing the way their sport is lost in a selfish drive to squeeze out more and more while listening less and less to the players, the main performers, without whom there would be no multi-billion industry.

We live in extraordinary times, admittedly. Coping with the first pandemic most parts of the sporting world have had to face in living memory and doing so safely is a hard task and remains a work in progress. We have also just entered the first year in which a World Cup, which was supposed to take place in June and July, will disrupt a European football calendar already bursting at the seams by being staged in November and December, with all the ripple effects that will cause.

We also live in a time when football’s ruling, white, largely myopic, tone-deaf and greedy middle-aged men seem obsessed by ruthlessly squeezing more product, more tension and more stress out of the sport — irrespective of what the players and coaches think, and irrespective of what damage these self-seeking proposals might inflict.

There is a proposed World Cup every two years, with the European Championship every other year, which would herald a cycle of these two behemoth football tournaments every single summer. Organisers of competitions like the Copa America and Africa Cup of Nations will be watching on to see whether these ideas get the green light — so that they can copy them. CONMEBOL, the South American confederation, reportedly already has an agreement for all 10 countries to join the UEFA Nations League from 2024 — in direct conflict with a biennial World Cup.

The 2022 World Cup will be held in a country, Qatar, which has proved incapable of holding the competition in the months it promised to during the bidding process; a country where a scandalous damage to the workforce engaged to build stadia has been inflicted. It is a World Cup about which Delaney, in a recent Danish TV documentary, said: “Any footballer you ask will say it’s a disaster. At least, that’s my opinion. I don’t think anyone in our squad thinks it’s a good idea. To me it’s a bad idea in every way. I wish it were different. It’s all about money — as it is now designed, the players have no say.”

There was the European Super League — badly constructed, wrong-headed, embarrassingly announced by a handful of clubs in England, Italy and Spain — and launched astonishingly ineptly to a hostile football public before, almost instantly, shrinking to a flaccid and embarrassing mess.

Every single one of these current initiatives requires the players to shine. To compete. To produce exquisite, rare skills — to make drama and to inspire fans so that clubs, associations, governing bodies and sponsors can harvest more and more cash. And the common theme, along with greed, myopic vision (and, hopefully, failure) is that the players aren’t consulted. None of those who are obsessed with discovering how much stress the golden goose can endure before it stops producing golden eggs appear to care a damn about the views of footballers and coaches.

Lewandowski and Mbappe, speaking at the Dubai International Sports Conference in late December, made that clear. The Bayern Munich man said: “I’m not a fan of this idea of a World Cup every two years. We have so many games, so many tough weeks every year. Not only the games but preparation for every single match, every preseason, every tournament.

“If you want something special, something different, we need a break. It’s not enough if we get two or three weeks in every summertime. If we want to play a World Cup every two years the expectations should be that the time for the players spend at a high level will go down. Perhaps to five, six or seven years. Otherwise it’s impossible: not only for the body but for the mentality as well.

“If you want to play [high level] football for over 10 years in your career then you need the breaks. It’s impossible to play a World Cup every two years and get high performance. Players need down-time, to relax.”

Mbappe was crystal clear, too: “I agree with Robert about performance. We already play 60 games a year. You have the Euro, the World Cup, the Nations League — so many competitions. We are happy to play but when it’s too much, it’s too much. We have to recover. We have to relax.

“If people want ‘just to see some games’ on the TV then of course we’re gonna play. But if they want to see quality in the matches, to see emotion which makes football beautiful too, then we have to respect the health of the players.”

For the moment, these two gigantic talents focused on the difference between fresh, inventive, daring, creative elite footballers and the entertainment which, alternatively, those tired, resentful, burned-out players might produce in the hell-scape of a clutch of international tournaments every single summer.

Of course their words also resonate with the images, in 2021, of Sergio Aguero coming off the Camp Nou pitch with breathing difficulties and, within weeks, being forced to retire early because of heart problems. Also with the most startling image: of Eriksen on June 12 coming so close to dying on the pitch in Copenhagen whilst Denmark were playing Finland.

“I see things in stark perspective, as to what is important and not important,” Kjaer said recently. “Christian is well, and so I can take things in and enjoy them. And that is also where I find peace — by speaking with Christian, I know he’s OK.

“With respect to football, it’s so crazy that there can be such a contrast between what one could call my wildest year ever and then at the same time have one of my best friends lie ‘dead’ on a football field.”

And while Eriksen has publicly stated he wants to return to action and play at the World Cup, it still shows a worrying trend. Only qualified medics could draw, or eliminate, direct correlation between the current non-stop demands placed on elite players and either of these two events or the sequence of collapsing or breathing-troubled players across Europe in the second half of the year.

There were many. One instance was Manchester United‘s Swedish defender Victor Lindelof. I’m sure you’ll recall — a couple of weeks ago against Norwich City. “Victor had problems to breathe and his heart rate was higher than normal,” United manager Ralf Rengnick said postmatch. “He was a little shocked.”

But however they are diagnosed, all these incidents are stark reminders of something that too many in power in football seem to have forgotten. Footballers are ordinary, breakable, under-pressure human beings. Not robots. Not commodities.

Right now it feels a little like things are out of control. Against this corporate backdrop of the big powerbroker trying to completely revolutionise the frequency of international tournaments there’s an increasing lack of tolerance, lack of human decency about clubs who want fixtures postponed because their staff, playing and technical, has been decimated by the coronavirus. It feels like we are now expecting players, and training staff, to universally and uniformly cope with the physiological and psychological stress of being diagnosed with COVID-19 as if nothing has happened.

Right now the drill seems to be: positive diagnosis, a few working days absent from training, then right back on the production line of gruelling match and travel every three days without even the hint of an impact on their current, medium or long-term wellbeing. Mentally and physically. And, please, let’s be honest with ourselves. Most of us are far too complicit in what’s going on. If you are fanatical about your team, if you generally live and breathe football … even if you find your life hard, a drudge and watching soccer on TV (or in stadia) is your panacea, it’s quite understandable that a non-stop diet of high-level football is attractive. Perhaps it feels essential.

But all of us — fans, journalists, sponsors, broadcasters — need to become more vocal consumers. It’s time to make it clear to those who run the biggest clubs, those who run FIFA, UEFA and the other confederations, that we support players’ rights not to have to play three games a week for club and country all year round, season after season with the growing trend for two or three weeks off in summer.

Planning for and prioritising the physical and mental wellbeing of the men and women who entertain us so royally via the beautiful game should be fundamental, and something that fans and the media have both a right and a duty to protest about.

And, over and above that, if we want fresh, dynamic, thrilling, inventive and dramatic viewing when we turn up at football ground or turn on our television then more of us should listen to intelligent, cosmopolitan, multi-lingual high-achievers like Mbappe and Lewandowski when they warn us that they are tiring, overburdened. The first thing to go, if we don’t show more common sense and empathy, is the quality which is on show in the sport we all love so much.

Rahm surges at Torrey Pines, within 2 of Ryder
Advantage, Novak Djokovic in the race to be tennis’ GOAT
No discipline for Zverev after abuse investigation
What’s next for USMNT without sporting director, GM or coach?
Women’s college hockey: Top players, key storylines, Frozen Four picks