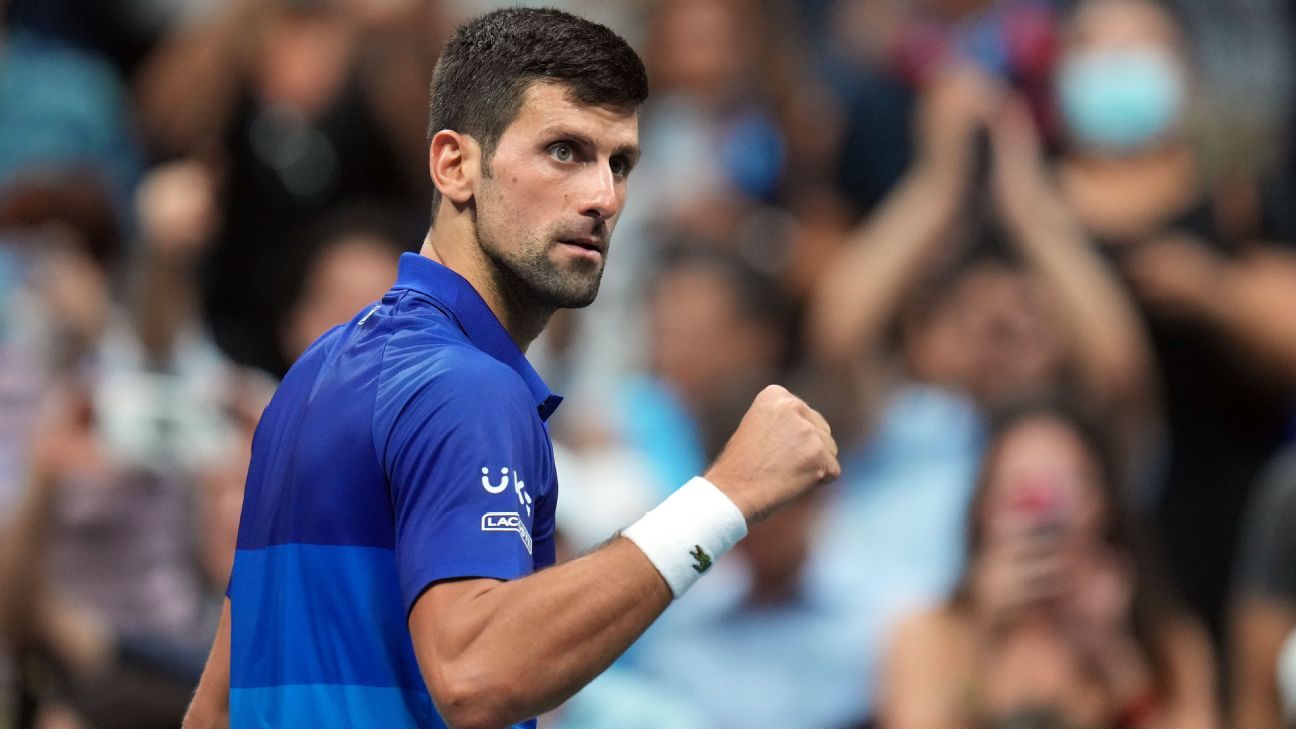 World No. 1 Novak Djokovic‘s hopes of winning his 10th Australian Open in 2022 were all but dashed on Thursday after he was denied entrance into Australia. Djokovic arrived in Melbourne late on Wednesday night, just a week-and-a-half ahead of the year’s first Grand Slam. The 34-year-old had been granted a medical exemption for the country’s COVID-19 vaccination requirements to compete in the tournament, but on a bizarre day in which he was detained for eight hours at the airport, his visa was ultimately denied.

“Mr. Djokovic’s visa has been cancelled,” Australian Prime Minister Scott Morrison tweeted. “Rules are rules, especially when it comes to our borders. No one is above these rules.”

In an interview on Thursday morning, Australia’s Minister of Health Greg Hunt said Djokovic failed to provide “appropriate standards of proof” for his exemption to border officials.

For months there has been speculation about Djokovic’s status for the year’s first Grand Slam due to his presumed reluctance to get the vaccine. He has never publicly stated whether he is vaccinated but has repeatedly called it a “personal decision” and a “private matter.”

Finally, earlier this week he announced he would be playing in the tournament and was on his way to Australia. But after days of public criticism over the exemption decision and a night full of confusion, it remains unclear if he will immediately leave the country or try to appeal the ruling and stay in a quarantine hotel nearby.

So, how exactly did this happen, and what does this mean for Djokovic and the tournament? Here’s what we know so far.

First thing’s first, are vaccines required for players at the 2022 Australian Open?

The short answer is yes. All players — as well as everyone on the grounds at Melbourne Park — must have completed the full dosage of the COVID-19 vaccine (meaning a series of at least two shots in most cases) in order to participate.

One could apply for an exemption if they met any of the guidelines suggested by the Australian Technical Advisory Group on Immunisation, which includes proof of a COVID-19 infection in the past six months, a “serious adverse event” from a previous dosage of the vaccine or an acute major medical condition.

Tournament director Craig Tiley said 26 people associated with the event — including Djokovic — applied for an exemption and only a “handful” were approved.

Why was Djokovic given an exemption?

Due to privacy laws, we don’t know for sure. Djokovic did test positive for the virus in June 2020, but there have been no reports of a further infection.

Tiley said Djokovic received no special treatment and each application was reviewed by two independent panels with the names redacted for privacy. Tiley called it “completely legitimate application and process.”

Djokovic had previously withdrawn from this week’s ATP Cup in Sydney, leading to speculation he would not compete at the Australian Open. But on Tuesday he revealed on Instagram he was heading to Australia for the tournament. “Today I’m heading Down Under with an exemption permission,” he wrote.

It sounds like Djokovic was given approval by the tournament, so why can’t he play?

Djokovic was granted an exemption by Tennis Australia (not the Australian government), but the wrong type of visa was filed for his border entry, and it was not valid for an unvaccinated person. As a result, he was stopped upon arrival at the Melbourne airport around 11:30 p.m. local time on Wednesday night. According to Djokovic’s father, Srdjan, Djokovic was isolated in a room by himself overnight while he spoke to Australian Border Force officials.

“Novak is currently in a room which no one can enter,” Srdjan told B92, a Serbian media organization. “In front of the room are two policemen.”

Goran Ivanisevic, Djokovic’s coach, posted a picture in the early morning hours from what appeared to be the airport, alongside Djokovic’s physiotherapist, Ulises Badio. The caption read: “Not the most usual trip Down Under,” with a series of emojis.

Per Paul Sakkal of The Age, a Melbourne newspaper, Djokovic was asked to provide documentation to prove the reason for his exemption.

“A federal government source familiar with the episode said there were question marks about whether Djokovic had adequate documentation to prove the reason for his exemption,” wrote Sakkal. “This evidence is required to be presented at the border by unvaccinated people. The source said it was not clear whether a COVID-19 infection in the past six months — which is suspected to be the justification for the player’s exemption — was sufficient to secure entry into Australia under federal guidelines.”

“Any individual seeking to enter Australia must comply with our border requirements,” Morrison said Wednesday in a news conference.

“If he’s not vaccinated, he must provide acceptable proof that he cannot be vaccinated for medical reasons. … If that evidence is insufficient, then he won’t be treated any different to anyone else and he’ll be on the next plane home.”

Home Affairs Minister Karen Andrews clarified on Wednesday the final decision would be up to the Australian Border Force.

“While the Victorian government and Tennis Australia may permit a non-vaccinated player to compete in the Australian Open, it is the Commonwealth government that will enforce our requirements at the Australian border,” Andrews said. “If an arriving individual is not vaccinated, they must provide acceptable proof that they cannot be vaccinated for medical reasons to be able to access the same travel arrangement as fully vaccinated travelers.”

Djokovic did speak to Border Force officials at the Melbourne airport for several hours as a decision was made.

Did anyone from Djokovic’s home country of Serbia get involved?

Serbian President Aleksandar Vucic spoke by phone to Djokovic while he was at the airport and vowed to do whatever the country could to help. Vucic posted about their conversation on Instagram shortly after.

“I told our Novak that [all of] Serbia is with him, and that our authorities are taking all measures to stop the harassment of the best tennis player in the world,” Vucic said in a translated text.

“In accordance with all of the norms of international public law, Serbia will fight for Novak [Djokovic], for justice and truth.”

According to reports, Daniel Emery, the Australian ambassador to Serbia, had been called in to help liaise with Serbian government officials in Belgrade. Officials from the Serbian embassy in Canberra have also been involved.

Isn’t Djokovic called the “King of Melbourne” and beloved by the Aussie crowd? Why was everyone so mad he would be playing?

More than 90% of Australia’s adult population is fully vaccinated, and residents of the country have experienced strict travel restrictions over the past two years as the country has attempted to contain the virus. As such, many are upset about the possibility of special treatment for a celebrity when many within the country still can’t travel internationally, or even in some cases, domestically.

The reaction to Djokovic’s exemption announcement was immediate and largely negative. In addition to the prime minister, several local politicians weighed in with their displeasure as well.

We have had 6 lockdowns – schools and small businesses closed, funerals and weddings told not to go ahead, families separated for months on end and now a tennis star gets an exemption.

A kick in the guts to every Victorian.#springst #AusOpen

How did other players react to the news?

Many felt similarly to the Australian public when the initial exemption was revealed.

“I think if it was me that wasn’t vaccinated I wouldn’t be getting an exemption,” former world No. 1 doubles player Jamie Murray told reporters at the ATP Cup this week. “You know, but well done to him for getting clear to come to Australia and compete.”

Other players have been more sympathetic to Djokovic.

“I don’t understand why [Djokovic] is getting so much hate for his vaccine exemption,” American doubles player Nicole Melichar said in a tweet before Djokovic’s visa was denied. “He’s within the rules, and the government could have said no but they didn’t.”

Two-time Australian Open quarterfinalist Tennys Sandgren, who is not playing in the event this year due to the vaccine requirement, has repeatedly voiced his displeasure at the Australian government for its treatment of Djokovic.

Just to be crystal clear here

And politicians are stopping it

What does this mean for the tournament?

Quite a bit! Djokovic has won more singles titles at the Australian Open than any other player in the Open Era, and was in search of his 10th trophy in Melbourne, as well as a record-breaking 21st major title. Having narrowly and devastatingly lost the elusive “Calendar Slam” at the US Open in September, Djokovic was undoubtedly looking forward to returning to his favorite Slam.

Djokovic, the three-time defending champion, was the heavy favorite to win the title, and his absence will certainly offer an opportunity to other players. For Daniil Medvedev, the world No. 2 who beat Djokovic in New York, it will be a chance to win another major title on the hardcourt, his favorite surface. For other young players, such as No. 3 Alexander Zverev or No. 4 Stefanos Tsitsipas, it might just be a golden opportunity for a first slam victory.

Additionally, 20-time major champion Rafael Nadal will be playing in his first major since the French Open (where he fell to — you guessed it — Djokovic in the semifinals) after being sidelined by an injury. He will now be the lone member of the “Big Three” in the draw and have a chance of his own to break the coveted major record.

Do any other tournaments or host countries have vaccine requirements? Will this become an issue throughout the season?

If there’s one thing we know for certain, it’s that protocols and regulations are constantly changing as the virus continues to mutate and new variants emerge. However, as of this writing, there is no word about any other tournaments or host countries requiring players to be vaccinated. Djokovic has previously stated he will not play in as many events at this stage of his career, so it’s possible we won’t see him compete again until Dubai in late February, or for the “Sunshine Double” in March at Indian Wells and Miami.

Who’s headed to Cooperstown? The five types of Hall of Fame candidates on this year’s ballot
Hill wins title with 5-round pummeling of Teixeira
Trout: Back ‘nonissue’ ahead of spring training
Wimbledon men’s doubles will be best of 3 sets
Thompson ups eagles total to 5, still atop AmEx