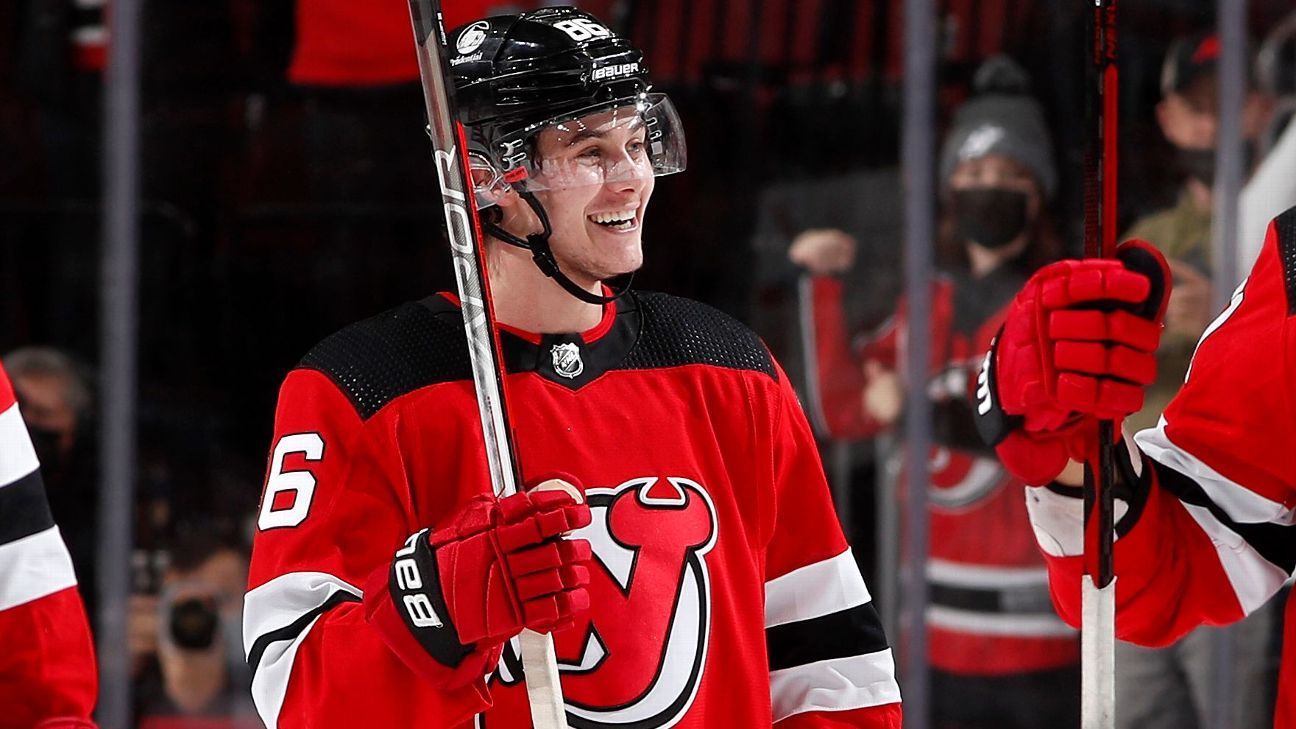 The moment Jack Hughes stepped off the ice in the New Jersey Devils‘ season opener — after he dangled through three Chicago Blackhawks, and scored on his backhand for an absurd overtime winner, then tossed his stick into the crowd in a moment of euphoric celebration — he turned to a team staffer and had one question:

“Am I going to get in trouble?”

Hughes, 20, spends his Sunday afternoons on his couch glued to NFL Red Zone. He knows all too well how the NFL’s taunting rule stirs controversy. Hockey, by nature, is much more reserved than football, with players rarely flexing their personality off the ice, let alone on it. Hughes had never seen an NHL player throw his stick into the stands before. He doesn’t know what compelled him to do it. He was intoxicated by playing in front of “a full barn again” with “an unreal crowd” that was “buzzing all night.”

He knows one thing for sure: “The boys loved it.” As for the suits in the NHL office across the Hudson River?

“Like, you just don’t know with the league and what they think,” Hughes said. “I didn’t know. I just thought, ‘If I get fined a few grand, I’m not taking this fine. The team better pick this up.'”

His concerns turned out to be moot. The league wrote a story on its website about the center’s twig-throwing heroics, and shared the clip on its social channels (several times). A month later, Hughes’ phone was blowing up with messages from his longtime buddy, Anaheim Ducks forward Trevor Zegras.

After roofing an overtime winner against the Washington Capitals, the 20-year-old Zegras launched his stick into the Anaheim crowd.

“I was like, ‘That’s nasty,'” Hughes said. “We were talking about it before, the last few weeks. So I wouldn’t be surprised if another one of my buddies were to do it, too.”

Hughes’ story is often told through the prism of his family, which has impressive hockey credentials. His mother, Ellen, a University of New Hampshire standout, played for the U.S. women’s team at the 1992 World Cup. His father, Jim, starred at Providence College and bounced around the NHL in coaching and player development roles. Jack’s older brother, Quinn, is a standout defenseman for the Vancouver Canucks, while younger brother, Luke, was drafted No. 4 overall by the Devils in July — a moment that went viral for Jacks’ uncontrollable enthusiasm.


(Hughes cringes watching the clip now, but justifies it: “It’s so rare for that to happen. Like, so many things have to line up.”)

While growing up as the middle brother in a puck-obsessed family certainly shaped Jack, it’s not the only thing that defines him. The Devils’ No. 1 center has an electric personality, which he’s finally ready to let loose — ushering in a new era for the NHL.

“You can kind of sense the culture is changing,” Hughes said. “It’s not an old man’s game anymore. It’s a lot of young kids coming in with confidence.”

The hockey ceiling has always been tantalizing with Hughes. “Super, super talented, smooth, obviously great hands, vision, play-making ability. He’s somebody who can kind of pretty much do it all,” said his roommate and teammate Ty Smith. “He easily could be in the mix for one of the best players in the league pretty soon. He could be a guy that puts up 100 points.”

It’s why the Devils felt comfortable giving Hughes an eight-year, $64 million extension in November, despite his having played only 119 NHL games.

Off the ice, the potential is just as great. Ever since he was drafted No. 1 overall by the Devils in 2019, Hughes has been hyped as one of the emerging faces of hockey in the United States. But now in his third season, Hughes feels comfortable enough to truly lean in. And if he’s leaning in authentically, he could challenge the status quo enough to become a transcendent star. That includes not giving the typical hockey player interview, where the pronoun “I” is avoided at all costs and true opinions are never shared.

“Guys, for some reason, tend to want to be serious and short with reporters,” Hughes said. “And, you know, I’ve been at fault for that too, at times. There’s times after games, you don’t want to say too much or you are in a comfort zone. I think now that I’m getting older, I’m starting to be more of myself. Like I’m a happy guy. I have a smile on my face most of the day. I love hanging out with my friends.

“I think people probably think I’m pretty cocky. I would say I’m pretty confident, but you know, that’s just, that’s what I’ve grown up as: I’m a confident, happy kid and I love my life and I really enjoy what I’m doing.”

It was a process for Hughes to get to this point. Being drafted No. 1 overall came with perks of which he’d never dreamed. After celebrating with family and teammates in Vancouver, where the draft was held, Hughes was whisked away on a private jet — a “PJ” in hockey parlance.

“I took my first ever PJ from Vancouver to New Jersey,” Hughes said. “And went to a Yankees game that night with Adam Sandler and Reggie Jackson. So yeah, it was a sick weekend. It was nasty.”

At age 18, Hughes made the Devils roster. Then the puck dropped on his rookie season.

The expectations are sky-high for any top overall pick, especially one that makes the opening night roster. But there’s also a paradox: A team wins the draft lottery because they are inherently bad. And the Devils team Hughes joined — which had selected No. 1 overall for the second time in three years — wasn’t in great shape. New Jersey was winless in its first six games. The Devils fired their coach, John Hynes, in December then traded their best player, Taylor Hall, who was just two years removed from his MVP season. By January, the GM who drafted Hughes, Ray Shero, was also let go.

Amid the turmoil, Hughes struggled in his transition to professional hockey. “You’re the first overall pick and then you’re in the NHL,” he said. “You’ve got [Connor] McDavid one night, then [Brad] Marchand the next night then [Sidney] Crosby the next night.”

Life came at him fast.

“Like, I was in high school, living at home, driving a car my parents paid for, lucky if I had Chipotle once a week. I’d have to ask my parents, ‘Hey, can I go to Chipotle with my friends?'” he explained. “And then the following year, you’re making a million bucks, playing in front of live arenas. You obviously have a lot of hype. It’s everything I dreamed of and I wouldn’t want to change it, I just wish I could have played better. But at the same time, I think going through that adversity is going to make me the player that I am.”

Hughes, who is listed at 5-foot-11, was also still developing physically. He bulked up with 14 pounds of muscle (going from 164 pounds to 180) entering his second season. And while he upped his production (going from 0.34 points per game to 0.55) he still felt like he was finding himself as a player. That said, he never lost confidence. “I mean, I could go like five games without a point and I’d probably still be l thinking I was the man,” he said.

Then, the pandemic hit, which Hughes said helped ground him. He returned to his family’s home in Michigan when the NHL season was put on pause in 2020.

“It allowed me to sit back and relax; I thought about myself, thought about my game, where I am and where I want to go,” he said. “That was a really good period for me mentally, to debrief and just look at myself in the mirror.”

One of the reasons Hughes feels empowered to show up and be himself now is because of his environment. The Devils, who are building now with conviction, are the youngest team in the NHL.

“Our captain is Nico Hischier and he’s 23 years old,” Hughes said. “On the ice, we’re learning how to put the work in and really learn how to win. But off the ice, in the locker room — I wouldn’t say it’s a party in the locker room, but obviously it’s a lot of fun.”

It doesn’t hurt that the elder statesman in the locker room is 32-year-old P.K. Subban, who is known for pushing boundaries of what we expect from hockey players off the ice.

Hughes is an avid fan of the NFL and NBA, and he’s beginning to dabble in soccer. He’s a student of other sports’ superstars and trendsetters.

“I love Jack Grealish, and his swag,” he says. “Soccer, or football over there, it wasn’t too big in my world growing up, but I watched the Euro Cup and he was nasty so I kind of caught onto that. And then LeBron. I grew up loving basketball, and he’s the goat in my mind.”

Hughes’ extracurriculars, for now, don’t deviate too far from those of a typical 20-year-old. In their free time, Hughes and Smith like to hop on their electric scooters and explore Jersey City and Hoboken — especially the food scene.

“You can’t even compare the bagels, and I won’t even touch the pizza back home [in Michigan] now,” says Hughes, making sure he adds that there are also “elite delis” in New Jersey. On Sunday’s, they set up camp on their couch to watch Red Zone, where they “sewer each other” (their words) while following their multiple fantasy leagues. It’s constant jabbing back and forth.

According to Smith, Hughes has also come “a long way” in the kitchen.

“That was a big flaw of his in year one,” Smith says. “His specialty was probably like scrambled eggs. But this year he’s got some steak and other things he can do, and it’s not bad. It’s nothing flashy, but he gets the job done.”

Hughes is also getting the job done on the ice. After missing 17 games with a shoulder injury, which halted the early-season momentum, Hughes is back. It took him a few games to ease back in, but the center now has nine points in his last four games — including yet another game-winner in overtime.

Hughes’ confidence, unsurprisingly, remains high. As he comes into his own as a hockey star, he never wants to lose his sense of self. And that means continuing to surprise.

Asked what he would be doing if he didn’t play hockey, Hughes replied: “I would say surfer. I feel like that’s like my personality away from the rink. Like low-key, happy just chilling. I’d be happy. That’s it. Nothing crazy.”