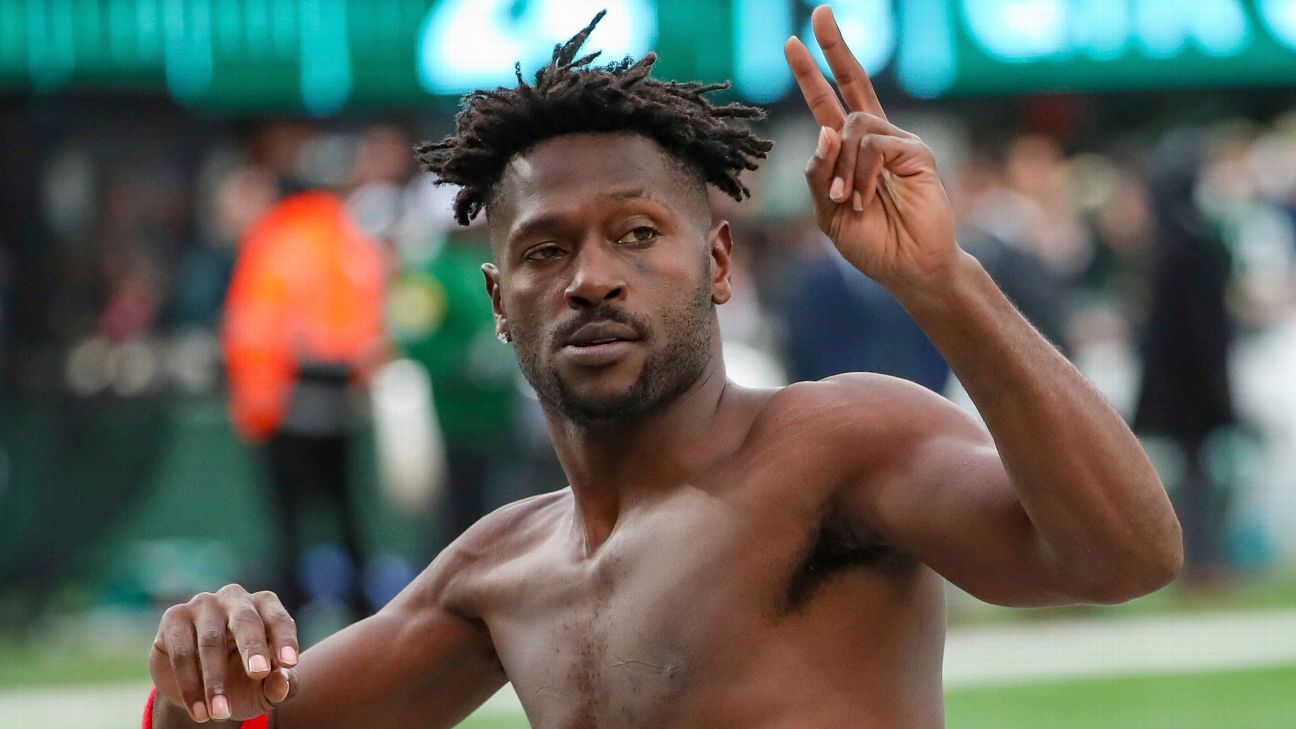 TAMPA, Fla. — Speaking for the first time since abruptly leaving during the Tampa Bay Buccaneers‘ game against the New York Jets on Sunday, Antonio Brown said he was forced to play on an injured ankle that will require surgery.

An MRI on Monday revealed broken bone fragments, a ligament torn from the bone and cartilage loss, the receiver said in a lengthy statement released Wednesday night.

Brown also accused the Buccaneers of mischaracterizing his outburst on the field as a “mental health issue,” rather than a refusal to play due to pain.

The Buccaneers did not have any immediate comment to Brown’s statement when reached later Wednesday night.

Brown was on the field for 26 plays before his exit during Sunday’s game in East Rutherford, New Jersey. Upset on the sideline, he took off his jersey, pads and undershirt, and threw his shirt and gloves into the stands. He then dashed across the end zone while both teams were on the field and waved to fans as he went to the locker room.

After the game, Bucs coach Bruce Arians denied having knowledge that Brown was injured, a point he reiterated Monday. Asked if Brown told him he was injured, Arians said, “No.”

Brown said the same in his statement.

“I took a seat on the sideline and my coach came up to me, very upset, and shouted, ‘What’s wrong with you? What’s wrong with you?’ I told him, ‘It’s my ankle.’ But he knew that. It was well-documented and we had discussed it,” said Brown, who had been questionable on the injury report. “He then ordered me to get on the field. I said, ‘Coach, I can’t.’ He didn’t call for medical attention. Instead, he shouted at me, ‘YOU’RE DONE!’ while he ran his finger across his throat. Coach was telling me that if I didn’t play hurt, then I was done with the Bucs.”

After Sunday’s game, Arians said Brown was no longer a Buc, which he reiterated Wednesday — even though the team has yet to formally release him.

Brown’s statement in its entirety:

“First of all, I’d like to express my gratitude to the Bucs, fans, and my teammates. The Bucs helped me return to productive football after I had difficulties that could have ended my career. We worked together to resolve those difficulties, and I will always appreciate that. Being part of a Super Bowl champion team and then a contender is a dream come true.

“I make mistakes. I’m working on myself and I have positive influences around me. But one thing I don’t do is shy away from playing hard on the field. No one can accuse me of not giving it my all every play.

“Because of my commitment to the game, I relented to pressure directly from my coach to play injured. Despite the pain, I suited up, the staff injected me with what I now know was a powerful and sometimes dangerous painkiller that the NFLPA has warned against using, and I gave it my all for the team. I played until it was clear that I could not use my ankle to safely perform my playing responsibilities. On top of that, the pain was extreme. I took a seat on the sideline and my coach came up to me, very upset, and shouted, ‘What’s wrong with you? What’s wrong with you?’ I told him, ‘It’s my ankle.’ But he knew that. It was well-documented and we had discussed it. He then ordered me to get on the field. I said, ‘Coach, I can’t.’ He didn’t call for medical attention. Instead, he shouted at me, ‘YOU’RE DONE!’ while he ran his finger across his throat. Coach was telling me that if I didn’t play hurt, then I was done with the Bucs.

“I didn’t quit. I was cut. I didn’t walk away from my brothers. I was thrown out. Being fired on the sideline for having a painful injury was bad enough. Then came their ‘spin.’ Coach denied on national television that he knew about my ankle. That’s 100% inaccurate. Not only did he know I missed several games with the injury, he and I exchanged texts days before the game where he clearly acknowledged my injury. He obviously knew I was on the injury list. And the GM acknowledged after the game in text messages to my camp that I did tell coach about my ankle pain on Sunday.

“I know we were losing to the Jets and that was frustrating for all of us. But I could not make football plays on that ankle. Yes, I walked off the field. But there’s a major difference between launching from the line and taking hits, compared to jogging off the field with a rush of emotions going through your mind. I am reflecting on my reaction, but there was a trigger. The trigger was someone telling me that I’m not allowed to feel pain. I acknowledge my past. But my past does not make me a second class citizen. My past does not forfeit my right to be heard when I am in pain.

“First they cut me. Now they cage me. Instead of asking how I felt or getting to the bottom of it, the team texted my camp promoting a totally false narrative that I randomly acted out without any explanation. They even told us in writing ‘don’t spin this’ any other way. I have stress, I have things I need to work on. But the worst part of this has been the Bucs’ repeated effort to portray this as a random outburst. They are telling people that first I walked off, then I was cut. No. No. No. I was cut first and then I went home. They threw me out like an animal and I refused to wear their brand on my body, so I took my jersey off.

“As part of their ongoing cover-up, they are acting like I wasn’t cut and now demanding that I see a doctor of their choice to examine my ankle. What they did not know until now is that on Monday morning I had an urgent MRI on my ankle. It shows broken bone fragments stuck in my ankle, the ligament torn from the bone, and cartilage loss, which are beyond painful. You can see the bone bulging from the outside. But that must and can be repaired. The MRI has been read by two top orthopedic surgeons in NYC, including Dr. Martin O’Malley at Hospital for Special Surgery. Not realizing that I had already scheduled a surgery at HSS, the Bucs ‘ordered’ me under penalty of discipline and with a few hours’ notice to show up to a more junior doctor at HSS for another opinion. What a joke. They’re playing like I wasn’t cut, giving me a surprise attack ‘order’ to show up to another doctor with no reasonable notice, and setting this whole thing up as a basis to cut me because what they did on Sunday was not legitimate. Sorry, GM. I already received a confirming opinion from the Top Doc at the hospital you ‘ordered’ me to go to.

“I love the Bucs fans. I really do. I love my teammates and everyone who showed me grace and believed in me. I gave the Bucs everything I had on the field. What the organization is doing now needs to get cleaned up. I do not understand how people publicly claiming to be concerned about my mental health can do these things to me in private.

“Once my surgery is complete, I’ll be back to 100% and looking forward to next season. Business gonna be BOOMIN!”

Burstyn also issed a statement on Wednesday night, saying in part: “Antonio never faked an injury in his life. It is incredible that people are pushing false rumors that what happened Sunday was the result of mental health issues and not a well known ankle injury. Why would they embark on a campaign of false concealment? To avoid responsibility for ignoring the risk of serious injury for the sake of winning a game.”