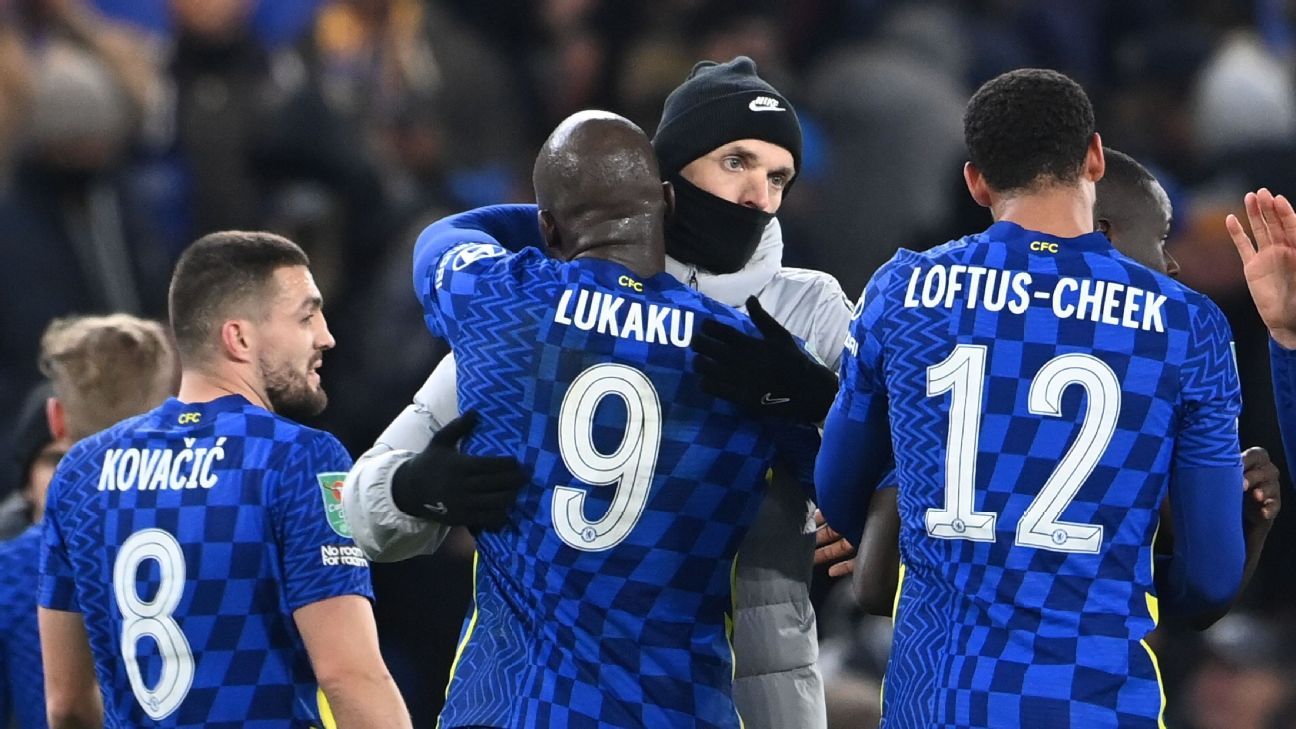 LONDON — Chelsea managers often succumb to the club’s internal politics, but after a challenging week on and off the pitch, it is difficult to imagine Thomas Tuchel emerging from the past week with more credit than this.

The only disappointing aspect of Wednesday’s 2-0 win over Tottenham Hotspur is that their Carabao Cup semifinal tie is still alive going into next week’s second leg, such was the profligacy in translating their superiority to the scoreline. There is an irony in Chelsea ending Romelu Lukaku‘s return to the fold ruing missed chances in the manner that prompted them to sign him in the first place, but this was nevertheless a tactical masterclass from Tuchel to follow the lesson in diplomacy he served up in the days prior.

Antonio Conte knows how precarious things can be in the home dugout at Stamford Bridge. He won the 2016-17 Premier League title but was sacked a year later amid disagreements over transfer strategy and, funnily enough, concerns over his handling of the club’s leading striker, back then a combustible figure by the name of Diego Costa.

The Lukaku situation is different but still fraught with danger. Lukaku’s controversial Sky Sport Italia interview laid bare concerns over Tuchel’s approach, a challenge to his authority that more autocratic managers may have found unacceptable.

Yet Tuchel has navigated a fine line between disciplining Lukaku and consigning the episode to history, while also managing a nod in the direction of accommodating the Belgium international in a way the striker believes can maximise his talents. Tuchel revealed that Thiago Silva and N’Golo Kante tested positive for COVID-19 on Tuesday, which at least in part prompted a change of system from 3-4-2-1 to 4-4-2.

“There weren’t five left to play a back five,” he said afterwards, also referencing injuries to Andreas Christensen, Reece James, Ben Chilwell and Trevoh Chalobah. “It took some minutes on the training pitch to walk through the principles.”

It was time well spent. The knock-on effect was for Kai Havertz to play alongside Lukaku, giving the 28-year-old a strike partner to feed off. This sort of arrangement was hugely successful for him at Inter Milan and may be the key to finally extracting the best from Chelsea’s €115 million signing in the weeks and months to come.

However, it wasn’t an instant success on that score given Lukaku touched the ball just four times in the opening half an hour. Perhaps Tuchel’s mastery of the Lukaku situation extended to somehow insuring he was so peripheral early on that any irate home fans had almost no opportunity to direct any hostility at the Belgian.

The visiting supporters did their best to stoke antagonism. “He’s Inter Milan, he’s Inter Milan, Romelu Lukaku, he’s Inter Milan,” sang the away contingent, but their fortitude was not replicated by Conte’s side, who gifted both goals in embarrassing fashion. Japhet Tanganga lost the ball cheaply to Marcos Alonso, who slipped a pass through for Havertz, and the Germany international steered a shot goalwards that Davinson Sanchez could only poke into his own net.

Chelsea were revelling in their preeminence, and by the time Lukaku made his first meaningful contribution 33 minutes in, they were only too ready to welcome him to the party. He picked the ball up and ran at Sanchez, who appeared to have quelled the danger before lunging into a reckless tackle that gave Hakim Ziyech an opportunity to whip one of his dangerous deliveries into the box. When Tanganga tried to head the ball away, his clearance stuck Ben Davies and ricocheted past Hugo Lloris in Tottenham’s goal.

Spurs improved after the interval, but they barely threatened Chelsea goalkeeper Kepa Arrizabalaga all night, inducing Conte into offering a frank assessment on the distance between Tottenham and his former club.

“Honestly, I also want to be very clear,” he said. “If we think that with the transfer window in January, we solve the situation, I’m telling you it isn’t true. There is a lot of job to do.

“First of all, in January it is very, very difficult to buy. Then you have to see if there is the possibility to buy players you need. I think that we have to continue in the way that we are doing, to continue to improve the levels of our players.

“Then if there are some opportunities and the club are convinced of these opportunities to improve the team, then yeah. I don’t see in the transfer window the resolution of our problem. To think you buy one or two players and solve the situation, you are not right.

“There is only not a problem of mentality. Chelsea last season won the Champions League and in this season they invest much money to improve the team. This is enough to understand the difference in this moment between us and them.”

That investment principally came in the form of Lukaku, who had a couple of chances to mark his comeback with a goal. Even without it, Tuchel looks on course to extend his 100% record in semifinals, winning all of his previous eight.

Lukaku went to acknowledge the home fans at full-time and received a subdued but warm response. It was probably about the best he could hope for in the circumstances.

Player power has often told in these parts, but there’s no doubting right now that Tuchel is the boss.