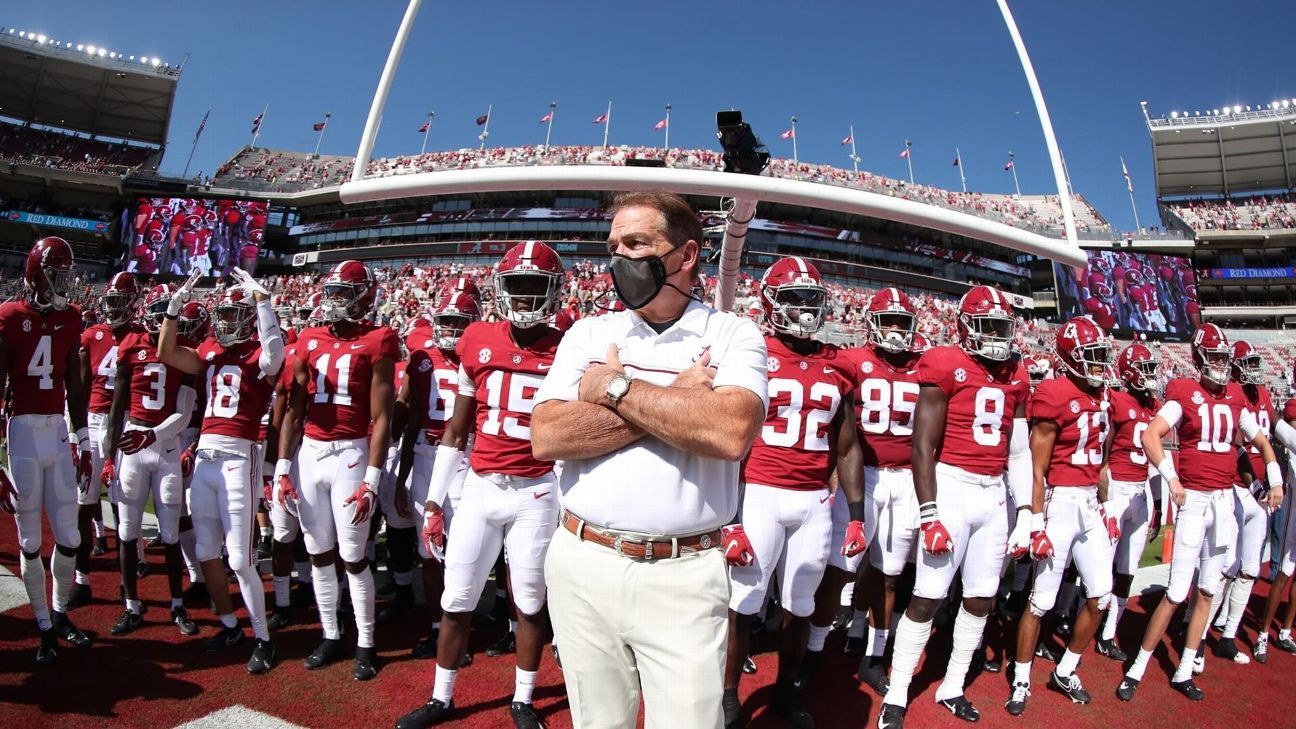 When Cincinnati got its shot to take on a heavyweight, facing Alabama in the Goodyear Cotton Bowl Classic, the Bearcats’ star corners, Ahmad “Sauce” Gardner and Coby Bryant, were eager to prove they could match up against the Tide’s Heisman Trophy-winning quarterback, Bryce Young, and wide receiver Jameson Williams, considered the top NFL draft prospect at the position in college football.

So eager, in fact, that the Bearcats won the coin toss and elected to defer, allowing Alabama to take the ball first.

Very quickly, things went awry as Cincinnati learned a lesson. You don’t pick your poison against Alabama; the poison picks you.

Alabama ran the ball on 10 of the 11 plays on the first drive of the game, with the one pass being an 8-yard touchdown toss to Slade Bolden. That set the tone for the day, as running back Brian Robinson Jr. had 134 yards in the first half, more than he had in 10 of 12 complete games this season. Young finished with his lowest passing total of the season — 181 yards on 17-of-28 passing. Williams caught seven passes for 62 yards and averaged just 8.9 yards per reception, also a season low. But it didn’t matter. By the time Alabama had wrapped up a 27-6 drubbing, Robinson had a career-high 204 yards, an Alabama bowl record.

“I didn’t expect the running ball that much,” Gardner said after the game. “I don’t know what we could have done. We did what we prepared to do, as far as the way we ran our defense. Hats off to them. They had a great O-line, great backs. And they showed that.”

And that’s the problem when facing Nick Saban’s Alabama teams. As good as Cincinnati was against the Tide’s stars, others adjusted to set a school rushing record, no small feat in a program with Alabama’s history of running backs. Taking on the Tide is like playing whack-a-mole. Hold the Heisman winner and the star wideout in check and there are five-star players everywhere else who get their turn to make history.

Smart knows better than anyone to expect the unexpected against Alabama. He’s 0-4 when facing his old boss, and most of those losses have come in the most painful fashion, including a 41-24 loss in the SEC championship game Dec. 4 after being ranked No. 1 for most of the season.

The last time Georgia faced Alabama in the CFP National Championship game, in January 2018, Saban benched starting quarterback Jalen Hurts in favor of Tua Tagovailoa, who sparked a Tide rally by going 14-of-24 with 166 yards and three touchdowns in the second half, erasing a 13-point deficit to win in overtime, 26-23. The next season, in the 2018 SEC title game, Saban brought Hurts in to replace an injured Tagovailoa in the fourth quarter and watched him lead Alabama on a 16-play, 80-yard drive to tie the score and then add a 15-yard touchdown run with 1:04 left for a 35-28 win over the Dawgs.

Like Smart, Kevin Steele is familiar with life in the SEC — and Saban’s operation, in particular — from inside and out.

Steele, whose coaching career began in 1980 at Tennessee, was defensive coordinator for Saban’s first Alabama teams in 2007 and 2008 before departing for Clemson, where he worked for Dabo Swinney until 2011. He returned to Alabama in an off-field role as the director of player personnel in 2013 and coached the Tide’s linebackers in 2014. He was LSU‘s defensive coordinator in 2015 and Auburn‘s DC from 2016 to 2020, a stretch in which he helped Auburn beat Bama twice in five seasons.

“There were so many weapons on the field that whatever you tried to take away, [Alabama] would instantly attack you with another weapon at your weakness,” Steele said. “A lot of that is tied to talent acquisition. But Coach [Saban] is really, really good — maybe the best — at saying, ‘OK, this is what we need to do to win the game.’ And it factors into a lot of things. It’s a beautiful game that never unfolds like you think it’s going to.”

Henry was second in the nation in carries going into the matchup, including 90 in Alabama’s previous two games — 46 against Auburn and 44 against Florida — for 460 yards.

“We are going to have to hit him harder — harder than we’ve ever hit anyone else,” Michigan State linebacker Jon Reschke said the week of the game. “It’s a challenge we are accepting.”

All indications were that it was going to be a slugfest. Saban praised how Michigan State closed the Big Ten title game with a 22-play, 82-yard drive to beat Iowa.

The Spartans did their job, holding Henry to just 75 yards, an average of 3.8 yards on his 20 carries. Their reward? A 38-0 Alabama win in which the Spartans — and a former Saban defensive coordinator, Mark Dantonio — were soundly beaten. That matchup Saban mentioned never came close to materializing, just like what Cincinnati discovered last week.

Alabama came out passing, and Henry didn’t get a touch until the seventh offensive play of the game. Quarterback Jake Coker completed 25 of 30 passes for 286 yards and two touchdowns, establishing career highs in completions and yards. Calvin Ridley, then a freshman, caught eight passes for 138 yards and two touchdowns after having caught just five TD passes in the season’s previous 13 games.

Michigan State had no answer for the Tide’s air attack, but Alabama didn’t even have to keep slinging it, holding the Spartans to just 239 total yards, including 1.1 yards per rush attempt.

Steele said Saban’s game plans can vary wildly on defense, too, although it’s not as apparent.

Since Lane Kiffin helped Saban modernize his offense, including in that game against Michigan State, the Tide have become even more terrifying because any given play can go one of several ways and make the most of the variety of talent on the field at any moment.

“Sometimes you’ve got to take what the defense gives,” Saban said after the Cincinnati game. “And a lot of these running plays had RPOs [run-pass options] and passes attached to them. I thought Bryce [Young] did a really good job of making good decisions and taking advantage of runs when we had them and a couple of advantage throws when we had them. When we’re the best, we can run it, but we can make plays in the passing game.”

A perfect example: With 2:22 left in the first half on his own 19, Young dropped back to pass until protection broke down. Then he easily pitched it to Robinson, who ran 23 yards before the first defender got a hand on him.

Bryce Young flips it to Brian Robinson and Robinson picks up 23 yards! 🔥 pic.twitter.com/1exsIhylKF

Three plays later, Young hit freshman receiver Ja’Corey Brooks, who had 79 yards all season, on a 44-yard touchdown strike to put Alabama up 17-3 on the Bearcats going into halftime.

“They schemed us up good,” Cincinnati linebacker Darrian Beavers said. “We tried to make some adjustments, tried to slow them down, but it’s just a really good team.”

Given these examples, Georgia won’t take much comfort in knowing it has already faced Alabama this year. LSU found that out, too. In 2011, the Tigers beat Alabama 9-6 in Tuscaloosa, holding the Tide to 3.1 yards per carry while averaging 3.6 in an old-school SEC battle of the trenches. The two teams met again in the BCS title game two months later, with Alabama holding LSU to 1.4 yards per carry while averaging 4.3 in a 21-0 win.

Steele said you can study as much as you want for a rematch like this one, but you’ll still have to be ready to adjust.

“Every piece of film comes into play,” he said. “It’ll be a different fight. If they got hit in the face with the right hand several times, they won’t get hit with that right hand this time. So you’ve got to be ready for the left hand. The talent level and the coaching is so good.”

In other words, this is a heavyweight rematch and nobody knows what will happen until they get hit in the mouth, Steele said.

“It’ll be a rare occasion that one of those teams gets beat in the same year, by the same team, doing the same thing the same way.”

Gulf Giants Team Camp Set Up for Players To Express Themselves: Gerhard Erasmus
From Slam Diego to the Oakland Zzzz’s: Way-too-early 2023 MLB lineup rankings
Serrano-Cruz: Two unlikely paths merge for a chance to make history
Trade grades: Horvat fills a need for the Islanders — but at a high cost
Rybakina tops Azarenka, to play for second Slam