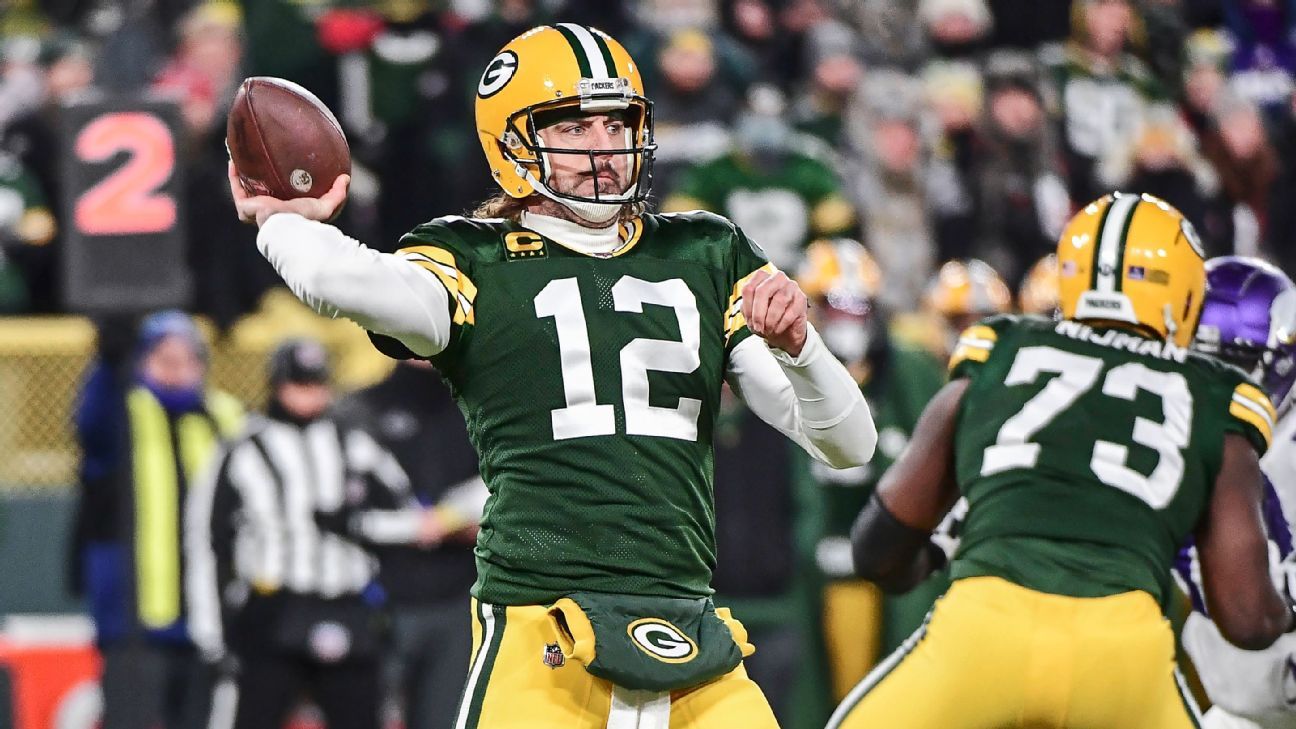 GREEN BAY, Wis. — Aaron Rodgers had strong words for the MVP voter who said this week that he would not cast his vote for the Green Bay Packers quarterback because he’s “the biggest jerk in the league” and “a bad guy.”

Those comments came from Hub Arkush, a Chicago-based reporter who owns one of the 50 votes for The Associated Press’ Most Valuable Player award.

“I think he’s a bum,” Rodgers said Wednesday. “I think he’s an absolute bum. He doesn’t know me. I don’t know who he is; no one knew who he was, probably, until yesterday’s comments. I listened to the comments but to say he had his mind made up in the summertime, in the offseason, that I had zero chance of winning MVP, in my opinion, should exclude future votes. His problem isn’t with me being a bad guy or the biggest jerk in the league. He doesn’t know me.”

Arkush, who is the editor of Pro Football Weekly and contributes to other Chicago-area media, made his comments on Chicago radio station 670 The Score and has since said he regrets saying he would not vote for Rodgers because of his issues with the quarterback’s off-the-field habits, such as his decision not to get vaccinated.

“His problem is I’m not vaccinated,” Rodgers said. “So, if he wants to go on a crusade and collude and come up with an extra letter to put on the award just for this season and make it the Most Valuable Vaccinated Player, then he should do that. But he’s bum and I’m not going to waste any time worrying about that stuff. He has no idea who I am. He’s never talked to me in his life.”

Rodgers acknowledged last month during one of his weekly appearances on The Pat McAfee Show that some voters might hold that and his viewpoint on the subject against him. Rodgers missed one game because he tested positive for COVID-19 and had to quarantine for 10 days because he was unvaccinated. That led to the exposing of Rodgers as an unvaccinated player who before the season told reporters that he had been “immunized” against COVID-19.

“I don’t think you can be the biggest jerk in the league and punish your team, and your organization and your fan base the way he did and be the most valuable player,” Arkush said Tuesday on The Score. “Has he been the most valuable on the field? Yeah, you could make that argument, but I don’t think he is clearly that much more valuable than Jonathan Taylor or Cooper Kupp or maybe even Tom Brady. So from where I sit, the rest of it is why he’s not gonna be my choice.”

Added Arkush: “I just think that the way he’s carried himself is inappropriate. I think he’s a bad guy, and I don’t think a bad guy can be the most valuable guy at the same time.” In a subsequent appearance on the station, Arkush said he regrets putting other votes in a position to have to answer questions about their votes.

“The only thing I can do going forward is respect what I failed to respect last night and just not talk about it anymore until after the awards have been given,” he said Wednesday.

While the AP award is considered the official MVP, which Rodgers has won three times (including for last season), the NFL is not involved in the process.

Packers coach Matt LaFleur said the only thing that should be considered in the voting is how someone plays on the field.

“I don’t know what else could factor into it than how somebody goes out and performs on a weekly basis,” LaFleur said. “If people are going to judge people for differences of opinion or things that they have no idea what the heck they’re talking about, then I think that just kind of discredits that award. I think we hold that award in high regard. I think most do. And I think it’s an absolute privilege to be able to vote for that award. To consider anything else outside of what you see when that player’s out there playing I think is a disservice to everybody.”

The Packers lost the game Rodgers missed due to COVID-19 but still managed to secure the No. 1 seed in the NFC playoffs with one game remaining. They’re 13-3 heading into Sunday’s regular-season finale at the Detroit Lions.

Rodgers has thrown 35 touchdown passes and only four interceptions (two of which came in the season opener) for 3,977 yards while completing 68.6 percent of his passes.

He likely will have the chance to add to it on Sunday against the Lions because LaFleur said he does not plan to hold out healthy players even though it’s a so-called meaningless game. However, that does not mean they will play the entire game.

“We did some studies in terms of how other teams have fared when going into the final week of the season that had a bye and it was overwhelmingly in favor of giving the guys at least some time,” LaFleur said. “And so, certainly you weigh in that information, but you also talk to your players and these guys want to play. So that’s how we’re going to go about it.”

Sources: Steele reunites with Saban as Tide’s DC
Davis Cup: Nagal’s win makes it 1-1 for India
Does Jesse Marsch’s dismissal pave the way for him to lead the U.S.?
Dodgers extend new addition Rojas through ’24
Who will win ROY? The next Michael Harris II? Bold 2023 predictions for MLB’s top prospects