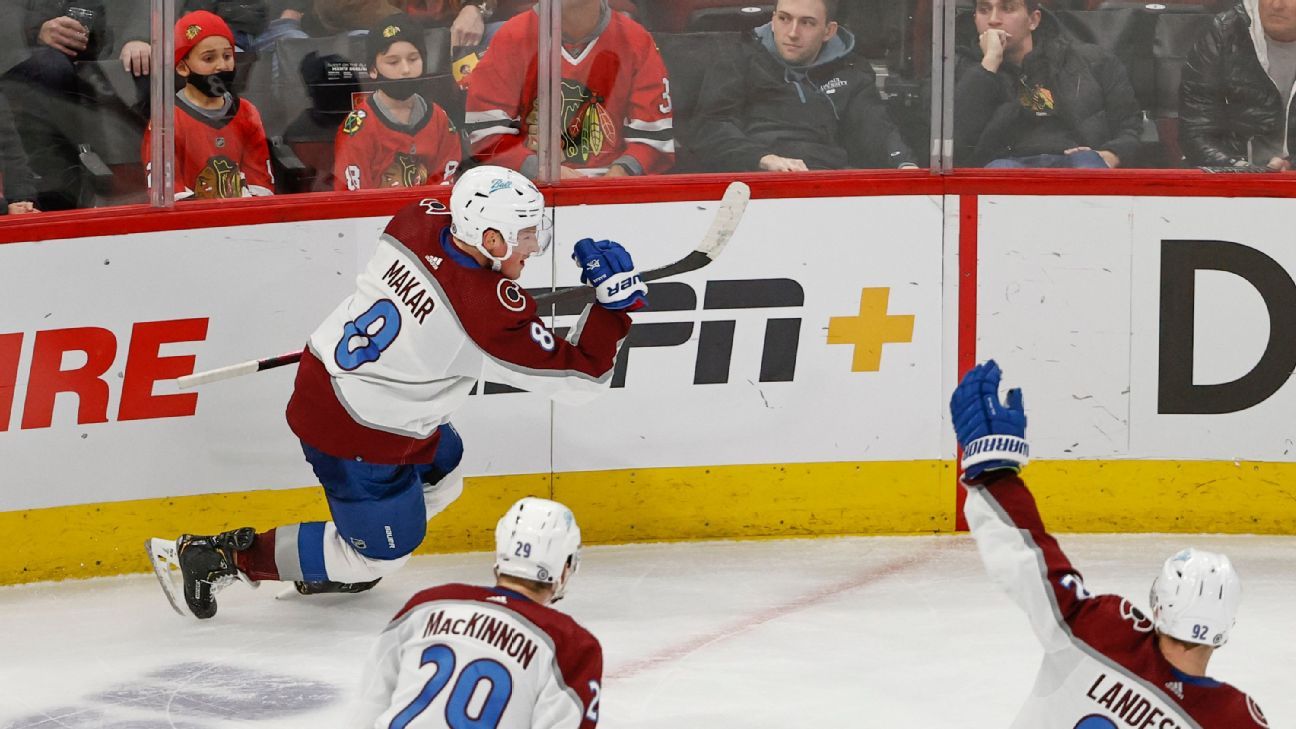 “Yeah, it was sick,” Johnson said.

Makar scored on a slick move 2:38 into overtime, lifting the surging Avalanche to a 4-3 victory over the Blackhawks.

Makar skated into the left circle, spun away from Chicago center Kirby Dach and then drove to the net. The 23-year-old defenseman moved the puck from side to side before beating Marc-Andre Fleury with a backhand for his 14th goal, extending his career high.

Colorado forward Logan O’Connor and Chicago captain Jonathan Toews each had a shot go off a post in overtime before Makar’s game winner.

Johnson had two goals as Colorado won for the seventh time in eight games. Alex Newhook also scored, and Darcy Kuemper made 28 saves. Star Nathan MacKinnon extended his point streak to 11 games, the longest active streak in the NHL, with an assist on Makar’s goal.

Johnson and Makar made it an NHL-best 32 goals for Avalanche defensemen. The team got 26 goals from blueliners in 56 games last season.

“I think that that’s part of the way we want to play,” coach Jared Bednar said. “It’s so hard to create offense with just a line. You end up playing three versus five a lot. You need your D to be part of it.”

Chicago dropped its fifth straight game. Alex DeBrincat had two power-play goals on consecutive shots, and Toews scored in the second period. Fleury finished with 29 stops in his first start since Dec. 17 after spending time on the COVID-19 protocol list.

“At least we got a point. We went toe-to-toe with one of the best teams in the league,” defenseman Calvin de Haan said. “I think it was overall a pretty good game for the Blackhawks.”

Led by DeBrincat and Patrick Kane, the Blackhawks moved in front with two goals in 40 seconds in the third period. First, DeBrincat converted a one-timer off a pass from Kane, and then he got his 20th goal when he beat Kuemper off another assist from Kane at 2:58.

The Avalanche tied it again when Johnson’s shot from the side appeared to go off Jake McCabe‘s stick and past Fleury at 11:44.

“The second one, just tried to get it to the net,” Johnson said. “Got lucky.”

It was the first meeting between the Central Division teams since Colorado’s 4-2 victory in the season opener Oct. 13. The Avalanche jumped all over the Blackhawks in the first game, opening a 3-0 lead 9:34 into the first period.

Colorado got off to another fast start in its first trip to Chicago this season. Johnson’s shot from near the blue line traveled through traffic in front before beating Fleury on the stick side at 7:43, and Newhook made it 2-0 when he converted a backhand with 6:06 left in the opening period.

The Avalanche nearly had another 3-0 lead, but Fleury robbed Tyson Jost with his left leg with 1:40 left.

Chicago responded with a much better performance in the second. Toews poked home a rebound for his fourth goal at 4:47. Henrik Borgstrom nearly tied the score in the final minute, but he was denied by Kuemper.