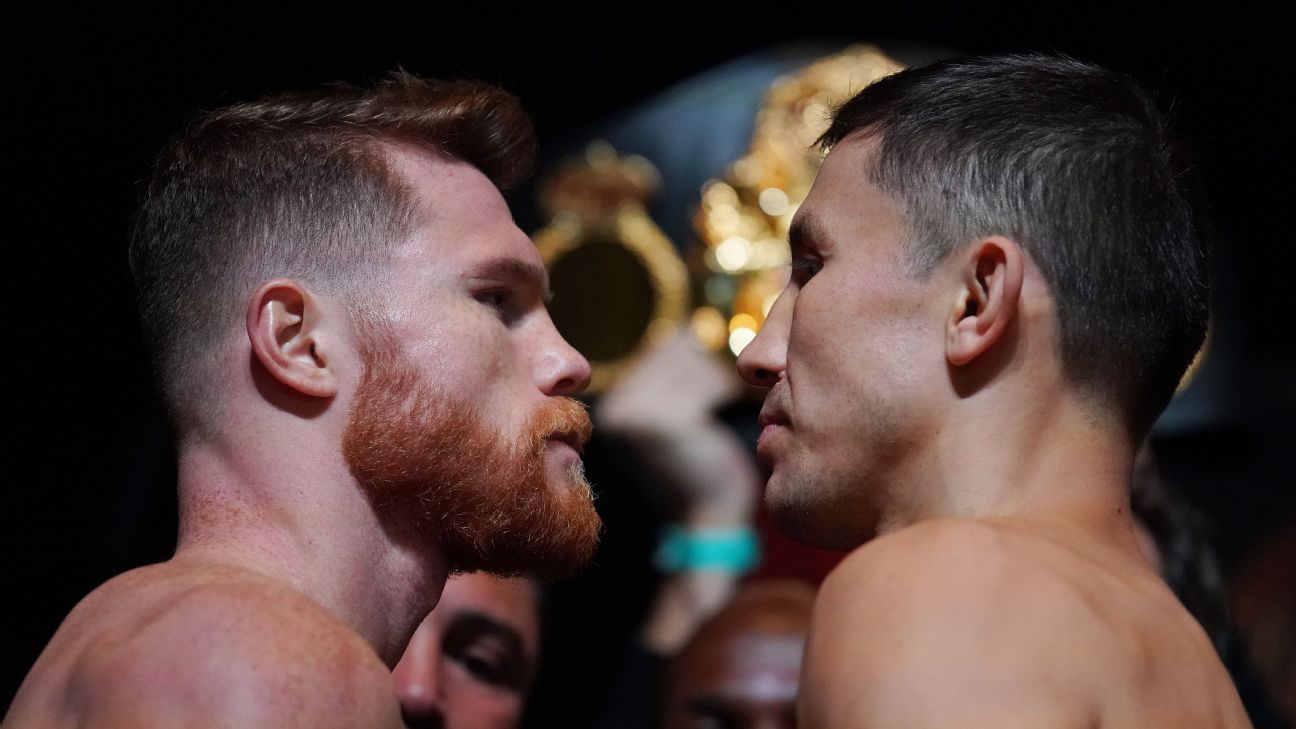 We kick off 2022 waiting and wishing for the marquee fights — the ones that can make boxing the focal point of the sports world, if only for a day, and the kind of fights that were in short supply in 2021.

The anticipated undisputed heavyweight championship bout between Tyson Fury and Anthony Joshua would have fit the bill last year — a global super fight planned for Aug. 14 in Saudi Arabia. But the arbitrator presiding over the Fury-Deontay Wilder dispute stood in the way, and instead, fans were treated to an instant classic in the trilogy battle between Fury and Wilder.

The sport — as we’ve come to expect — failed to deliver many of the obvious matchups that would bring the sport to prominence. Sure, we saw Canelo Alvarez claim all four major super middleweight titles in fights with Billy Joe Saunders and Caleb Plant in two very entertaining fights. But another year passed without a third meeting between Alvarez and Gennadiy Golovkin, the biggest commercially appealing fight on the table for boxing’s top star.

Top Rank Boxing is on ESPN and ESPN+. Subscribe to ESPN+ to get exclusive boxing events, weigh-ins and more.

Oleksandr Usyk-Joshua and Fury-Wilder 3 were big-time fights last year, and Usyk and Joshua will fight again in 2022, but the end result is that we still don’t have an unquestioned king of the heavyweight division. On the bright side, we might be moving closer to the long-awaited welterweight title fight between champions Errol Spence Jr. and Terence Crawford following the expiration of Crawford’s Top Rank contract.

And there’s hope that we’ll finally see some of the stars in the talent-rich lightweight division actually fight each other, rather than just trading insults on social media.

Boxing has another chance in 2022 to right past wrongs by coalescing and bringing fans the matchups they deserve. Here are seven fights — with an actual chance of materializing — I want to see this year:

Midway through the first bout between Usyk and Joshua in August, it became clear that AJ-Fury was no longer the biggest fight in boxing. Usyk didn’t just dominate Joshua — he looked to be on the verge of stopping him in Round 12.

When Fury sent Wilder to the canvas for good in Round 11 in October, the stage was set to crown an undisputed heavyweight champion in 2022, even if it wasn’t the fight we envisioned.

Still, obstacles remain. Fury was ordered to defend his WBC title against Dillian Whyte in the spring, and Usyk owes Joshua a rematch. If both Fury and Usyk win, as expected, the deal shouldn’t be too difficult to piece together.

Fury has one fight remaining on his deal with Top Rank. Usyk will be a promotional free agent. There’s always the possibility of step-aside deals for Joshua and Whyte as well, which would allow Fury-Usyk to proceed in the spring.

Besides the enormity of the undisputed heavyweight championship, this fight would be spectacular when you consider the kind of star Fury has grown into. It’s also a fascinating fight in the ring. Fury will be the favorite, for good reason, but Usyk has proven the incredible footwork and boxing skills that led him to supremacy at cruiserweight also make him an elite heavyweight.

Enough is enough. It’s time to settle the score once and for all. Detractors will point out that Golovkin turns 40 in April and is past his best days. Similar things were said about Juan Manuel Marquez ahead of a third fight against Manny Pacquiao, and they delivered a great fight. Then they fought a fourth time, when JMM knocked Pacquiao out.

Through 24 rounds between Alvarez and GGG — a disputed split draw and a majority decision win for Alvarez — it can be argued Golovkin won more rounds. Alvarez will be installed as a clear favorite in a third meeting, especially with the fight at 168 pounds, but it’s possible Golovkin just has the right style to always give Alvarez a tough test.

No matter what we think about competitiveness, this is probably the top moneymaker on this list. Both of their fights produced over 1 million pay-per-view buys and gates that exceeded $20 million. Alvarez doesn’t own a convincing win over Golovkin yet, so this is for legacy, too.

We’re now entering the theater of the absurd when it comes to the possibility of this matchup, a fight that could have — and should have — happened years ago. Luckily, the fight isn’t simply still relevant; it’s perhaps bigger than ever.

The likelihood of the bout finally happening is also greater than ever before. The No. 1 impediment was always boxing politics, with Spence aligned with PBC and Crawford with Top Rank. Now “Bud” is a promotional free agent, so that should no longer be an obstacle.

Another impediment removed: the possibility of either man winning the Manny Pacquiao sweepstakes. With the all-time great retired, there’s one less massive money opportunity at 147 pounds.

Spence is on the comeback trail once again following surgery to repair a detached retina. He’s finalizing a deal to fight Yordenis Ugas in the spring and the winner will emerge with three welterweight titles. Crawford, who has the other major belt, is coming off a career-best performance with a 10th-round TKO of Shawn Porter.

Hopefully, Spence and Crawford will finally share the ring late in the year, before this matchup actually loses its luster.

This matchup has been in talks for years, and even without a heavyweight title on the line, it would be must-watch TV. Two massive punchers, two of the biggest names in boxing and both fighters looking to fight their way back to the top.

There would be so much at stake. After their collective losses in 2021, another defeat would be debilitating for each man’s prospects of a future title shot. With desperation in the air, this would be a guaranteed firefight.

Can Joshua regain confidence in his chin against the sport’s most ferocious puncher? What does Wilder have left after absorbing two knockout losses to Fury, including a tremendous 11-round beating in the trilogy fight?

Hopefully we find out while this matchup is still viable.

Kambosos finds himself in the driver’s seat of the hottest division in boxing after his shocking upset of Teofimo Lopez in November. With so many contenders jockeying to fight for the undisputed lightweight championship, there are a number of tantalizing bouts that include Kambosos, but one with Haney is the most appealing.

Haney, of course, has insisted that Kambosos isn’t quite undisputed, since Haney is listed as the WBC’s 140-pound champion, as opposed to Kambosos’ “franchise” WBC belt previously held by Lopez and Vasiliy Lomachenko, which has thrown the undisputed tag into chaos. That’s an added layer of intrigue to the fight. And Haney has earned a shot at Kambosos, too, with a breakout 2021 that featured wins over Jorge Linares and Joseph Diaz Jr.

Was Kambosos’ performance against Lopez a fluke? Haney is certainly good enough to tell us just what caliber of fighter Kambosos is, and the American said he’s willing to travel to Kambosos’ home country of Australia for the bout.

This fight would have incredible appeal to younger fans who are more likely to watch Jake Paul than Canelo Alvarez.

Both Garcia and Davis boast immense social media followings, particularly the former, as Garcia has more than 8 million on Instagram. They’re both devastating punchers and there’s reason to believe this fight will actually happen.

We all know Luke Campbell is better then all of tanks opposition, tank can’t beat me he knows that and mayweather knows that. I’m too fast and i got to much accuracy, cmon may weather you can’t protect him forever

After all, Garcia and “Tank” Davis were in talks in early 2021 before “King Ry” pursued a showdown with Pacquaio that never materialized. By the time he revisited a bout with Davis, Davis had moved on to Mario Barrios.

After Davis struggled with Isaac Cruz in December, Garcia was quick to critique Davis and call for the fight to happen next. With Garcia now recovered from wrist surgery, this fight makes too much sense. It’s easy to forget because it happened one year ago, but Garcia’s most recent fight was an impressive seventh-round TKO victory of Luke Campbell.

Golden Boy, Garcia’s promoter, might want to match Garcia with an easier opponent first, but after that, it’s time to finalize a bout with Davis before it loses its appeal.

What’s not to like about this matchup at super middleweight? The trash talk between the boxers has often veered into the absurd (Charlo said he wouldn’t fight Benavidez until he turned 25 and was vaccinated against COVID-19), and it’s usually been Benavidez pushing for the fight.

In the ring, this would be explosive, with two powerful punchers mixing it up with so much at stake. Both fighters are with PBC and appear on the short list for a shot at Alvarez this year. Alvarez has suggested someone earn a fight against him now that he has all the belts, and a win for either against the other would certainly do that.

Charlo is unbeaten at 160 pounds but has rarely been tested. He’s big even for the middleweight division after winning his first title at 154 pounds, and he has indicated interest in seeking a title in a third weight class.

Benavidez, meanwhile, is even more unproven. He’s been stripped of his 168-pound title twice due to problems making weight and a positive test for cocaine, but when he’s fighting he’s a joy to watch. He delivers punches in bunches and never stops rolling forward. He’s set to fight David Lemieux in the spring, but after that a fight with Charlo would be most welcome.