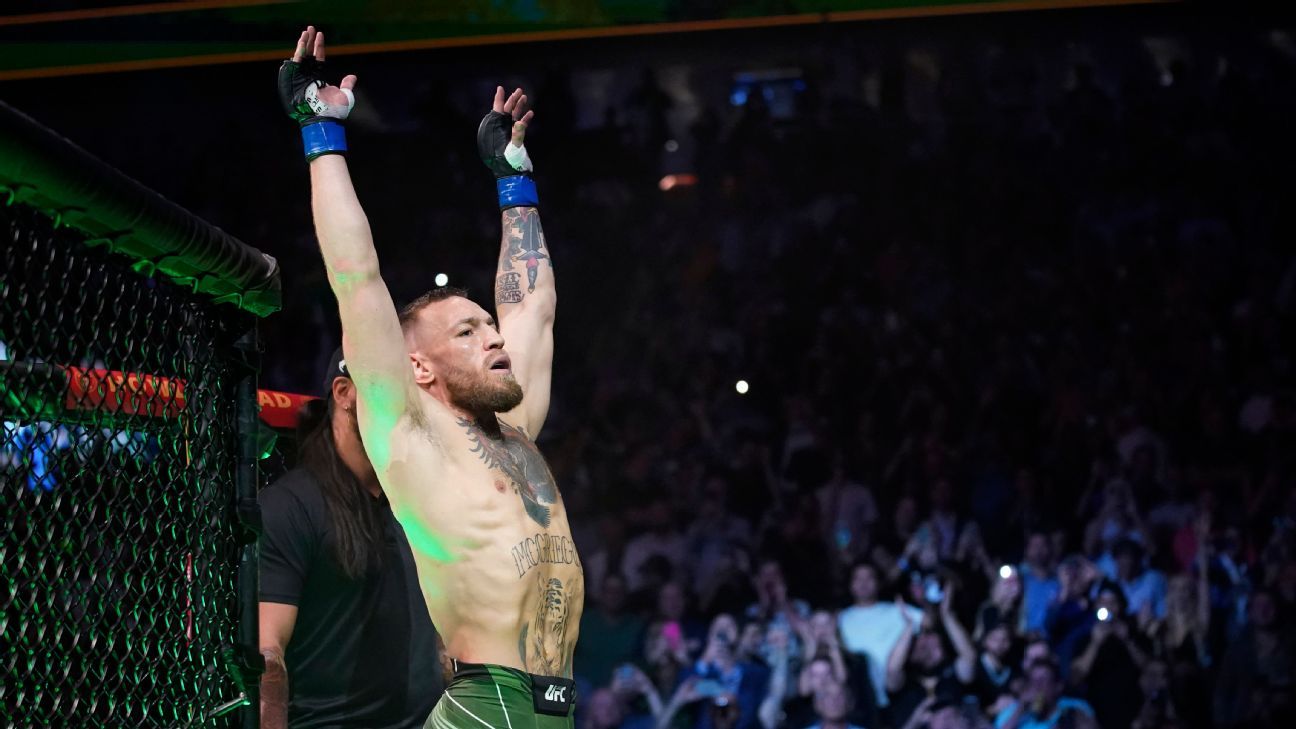 The next 12 months could be some of the most interesting in MMA history.

Conor McGregor is set to return from a broken leg. Jon Jones, who hasn’t fought since February 2020, could finally get a heavyweight title shot. Kamaru Usman is closing in on Anderson Silva‘s record of 16 straight UFC victories.

Meanwhile, Nate Diaz is going back and forth on social media with Dustin Poirier, and the next time Diaz fights could be his final bout in the UFC. Francis Ngannou defends his UFC heavyweight title against his former training partner Ciryl Gane at UFC 270 on Jan. 22 — and it could be his final fight in the UFC. McGregor has two fights remaining on his UFC contract. Jake Paul and UFC president Dana White are exchanging diss videos on social media.

Yes, 2022 could be the most newsworthy year ever in mixed martial arts. If the end of 2021 and the first few days of January are indication, things could go off the rails quickly. With that in mind, we took a crack at some bold predictions that could actually come to fruition before 2023.

A UFC star will depart for boxing

Some will say this isn’t too bold. But it still will seem rather unbelievable until it actually happens, just because this kind of thing hasn’t been a threat to the UFC in well over a decade. Never before has a year started when there were several major UFC stars coming up on free agency. McGregor has two fights left on his contract. Diaz has one. Ngannou could be a free agent if he loses to Gane at UFC 270. It’s a possibility that one of them — or even more than one — could depart the UFC in 2022. Ngannou has all but said he will box one day, and that day could be sooner rather than later.

With all of this being said, it still remains extremely unclear if any of the fighters who could be free agents this year will actually make the leap. There are risks involved. The UFC is still a massive promotion with an enormous following. Going out alone without that safety net is not an easy thing to do. If it’s going to happen, though, this would likely be the year, with those aforementioned names likely able to command a hefty price tag. To be frank, though, it would still be a complete shock seeing Diaz or Ngannou in a boxing ring before 2022 is up. Even if the wind is blowing somewhat in that direction.

Conor McGregor will get a title shot

Dana White evaluates Conor McGregor’s 2021 in the UFC and discusses when he thinks “The Notorious” could return in 2022.

Yes, McGregor has exactly one win since 2016. And sure, that victory against Donald “Cowboy” Cerrone hasn’t aged all that well. We cannot forget, though, just how much McGregor means to the UFC from a financial perspective. He’s the biggest star in the history of the promotion, even when he has lost back-to-back fights via finish to Dustin Poirier. Even when he’s healing from a broken leg suffered against Poirier last July. And there doesn’t seem to be an heir apparent to take McGregor’s place. So, the chances of McGregor, despite his shoddy recent record, getting a crack at the title are something more than slim.

McGregor has already let it be known that he wants to challenge for the UFC lightweight belt upon his return from injury. Charles Oliveira is the current champion and Justin Gaethje is queued up as the next contender. Could McGregor actually fight the winner? Possibly. Oliveira has already said he’d let McGregor jump the line because of the lucrative nature of that fight. Another possibility: McGregor comes back, wins a fight and then gets slid into the title picture.

MMA Junkie’s Mike Bohn reported that there was more in-fight time in the UFC than ever before in 2021. The promotion has been a content machine, even through a global pandemic, and there are more fights than ever before. With the amount of fights per card, and the potential for the amount of cards increasing in 2022, there’s an opportunity for the UFC to add another division. And the best one in the world that the UFC doesn’t currently have? Women’s atomweight.

There are a solid number of excellent atomweight fighters in the world, such as Invicta FC’s Alesha Zappitella and Jessica Delboni, as well as South Korea’s Seo Hee Ham (ONE Championship) and Kanna Asakura (Rizin). Seika Izawa, the 24-year-old uber-prospect, just shocked longtime atomweight great Ayaka Hamasaki, the former Invicta champ, at Rizin on New Year’s Eve. Women’s 105 pounds is a fun division with some marketable athletes and exciting fights. Plus, having another champion on the UFC roster creates more premium content, simply by adding about three more title fights per year to the docket.

A major MMA promotion will close up shop

Khabib Nurmagomedov says his new promotion, Eagle FC, is planning to sign Kevin Lee and will even create a 165-pound weight class.

The MMA landscape is getting crowded nowadays. With the UFC coming off its greatest year ever in terms of revenue, the biggest combat sports promotion in the world is healthier than ever. The gap has expanded between the UFC and everyone else during the pandemic. That leaves a host of other promotions to try and find their niche, and enough marketable fighters outside the world of the UFC.

And more companies are emerging. Khabib Nurmagomedov‘s Eagle FC is making big moves heading into 2022. Gamebred FC, run by Jorge Masvidal, has a unique, bareknuckle MMA concept. Combate Global continues to do strong ratings with the United States’ Spanish-speaking audience. Anthony Pettis has his own MMA promotion on the way, too.

With all of this content, something has to give. Is there a market for all these MMA and MMA adjacent companies? Probably not. It’s a rat race, and there are always going to be winners and losers. There are promotions already out there scratching and clawing to survive. Certainly, there is a chance a fairly big one won’t be able to continue past 2022.

The door is already ajar for this to happen. Julianna Peña stunned Amanda Nunes to become the UFC women’s bantamweight champion at UFC 269 last month. Peña not only beat Nunes — the greatest women’s fighter of all time — she finished her via submission (rear-naked choke). Nunes will probably get a rematch in an attempt to reclaim her throne. Surely, she will be favored. But at some point this year, the UFC has to pull the trigger on “Bullet” coming back up to bantamweight.

Shevchenko is a phenomenal, dominant UFC women’s flyweight champion. But she is head and shoulders above the competition there. Why not have her move up to 135 and challenge for the title there against either Nunes or Peña while the 125-pound contenders get sorted? If that does happen, Shevchenko could very well win the bantamweight belt. She has lost to Nunes twice, but the second bout was a razor-thin decision for Nunes. And right now, with Nunes’ loss, Shevchenko is MMA’s pound-for-pound queen.

Three fighters from the Caucasus region will hold UFC gold

Khabib Nurmagomedov is retired. But his countrymen are poised for an enormous 2022, with Nurmagomedov in some of their corners. Three natives of Russia’s Caucasus region (if not four) have a chance to become a UFC champion in 2022. That list starts with Dagestan’s Islam Makhachev, Nurmagomedov’s longtime training partner whom Nurmagomedov coaches. Nurmagomedov’s late father, Abdulmanap Nurmagomedov, planned for his son to retire and then for Makhachev to win the UFC lightweight title. That could happen in 2022. Makhachev is likely one win away from a title shot. He fights Beneil Dariush on Feb. 26.

Khamzat Chimaev, who hails from Chechnya, is one of the fastest-rising and most dominant prospects in all of MMA. This year, the prospect label is gone, and he’ll become a legitimate contender for the UFC welterweight title. Then there’s Askar Askarov, an undefeated Dagestani flyweight who has already fought to a draw with current UFC champion Brandon Moreno. He very well could get a title shot in 2022.

Not satisfied with three? How about Magomed Ankalaev? The UFC light heavyweight division is very much in flux with the departure of Jon Jones to heavyweight. Ankalaev has won seven in a row and could be the top 205-pound contender by the fall, or perhaps the winter.