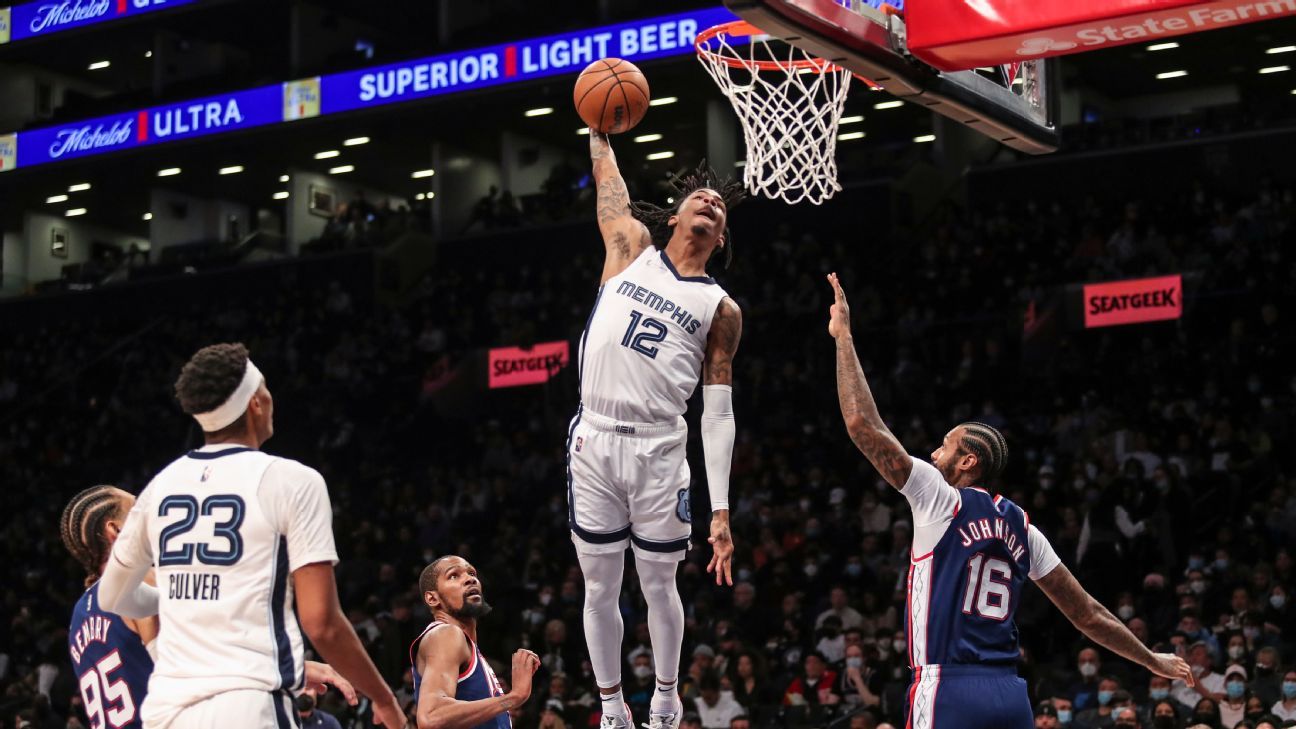 NEW YORK — Memphis Grizzlies guard Desmond Bane has heard the chatter about whether his backcourt mate, Ja Morant, should make his first All-Star Game this season.

But after Morant’s latest dominant performance — 36 points, 6 rebounds, 8 assists and a game-high plus-24 in 33 minutes of a 118-104 Memphis victory over the Brooklyn Nets on Monday night at Barclays Center — Bane said people are having the wrong debate.

“He’s special,” said Bane, whose 29 points helped propel Memphis to a fifth straight win. “People debate whether or not he should be an All-Star, but I think we should be debating whether he’s the best point guard in the league.

“I don’t think it’s any question he’s an All-Star. The real conversation is, ‘Is he the best point guard in the league?'”

While a certain guy who wears No. 30 is plying his trade in the Bay Area, Morant likely will have a tough time earning that title. But what can no longer be disputed is that the third-year guard has officially arrived as a star.

Last week, Morant poured in 41 points to beat LeBron James and the Los Angeles Lakers in Memphis, Tennessee. Monday, it was Kevin Durant‘s turn to see Morant slice and dice his way through an opponent, as the Grizzlies continue to firmly establish themselves as a top-four seed in the Western Conference.

“I mean he’s just controlling the game and always been an efficient player who can run the point guard spot,” said Durant, who scored 26 points but was uncharacteristically inefficient in finishing 8-for-24 from the floor. “He’s developed into a major scorer, as well. He just plays with great pace out there, plays with joy and enthusiasm and you’ve seen him blossom in front of our eyes.

“Since college he’s been on this trajectory. As a basketball fan, I can’t wait to see what it’s like years going forward.”

Forget the years going forward — Morant’s present is already pretty good, as he demonstrated in a scintillating third quarter that blew open a game that Memphis led by just six at the half.

The Grizzlies outscored the Nets 40-26 in that frame, with Morant scoring half of his 36 points in those 12 minutes alone.

And while the highlights likely will focus on his spectacular dunk — Morant swooped in from the left-hand side to detonate at the rim — it was his repeated attacks through Brooklyn’s defense for one contorted layup after another that were arguably more impressive.

“Just stay aggressive, pretty much,” Morant said when asked what his mindset was in that third quarter. “I thought we played very well in that first half, [but] we really didn’t get out and run as much.

“My job is we get stops, we get the board, push the pace, whether it’s me pushing the ball down the floor or kicking the ball ahead. … I was able to get downhill and go score and find my teammates.”

Memphis is now 10 games over .500 and several games ahead of the cluster of teams battling for the 5-10 spots in the Western Conference playoff picture.

It was a dominant performance, one that saw Memphis outrebound Brooklyn by 29, and was far more lopsided than the final score indicated, thanks to a largely meaningless run by the end of Brooklyn’s bench in the fourth quarter. That didn’t change Nets coach Steve Nash’s assessment of his team’s play since recovering from a teamwide COVID-19 outbreak ahead of what should be Kyrie Irving‘s season debut Wednesday at Indiana.

“Let’s not overreact, but that was embarrassing tonight,” Nash said. “We got our butts kicked, and we got to do a lot better to get back to the standard that we played at before.”

The team Memphis has built around Morant — from the talent amassed by general manager Zach Kleiman, including pieces like Bane and Jaren Jackson Jr., to the coaching of Taylor Jenkins — has allowed the Grizzlies to keep winning no matter who is available.

But despite the Grizzlies’ not only surviving, but thriving, while shuttling players in and out of the lineup — a situation virtually every NBA team is dealing with these days — it is Morant who undoubtedly is the engine that makes the team go.

When asked about the All-Star chatter himself, Morant said he wasn’t going to do any campaigning through the media. Instead, he said he’d leave that for others — and let his game do the talking for him.

“I really don’t focus on it too much, honestly,” he said. “Everybody who knows me, including my teammates, people throughout the organization, know I’m a very humble guy, but that I’m also confident.

“So I’m gonna let my teammates continue to talk for me,” he continued, before adding with a smile. “I’m just gonna go out there and do what I can on the floor to help prove their case right even more.”