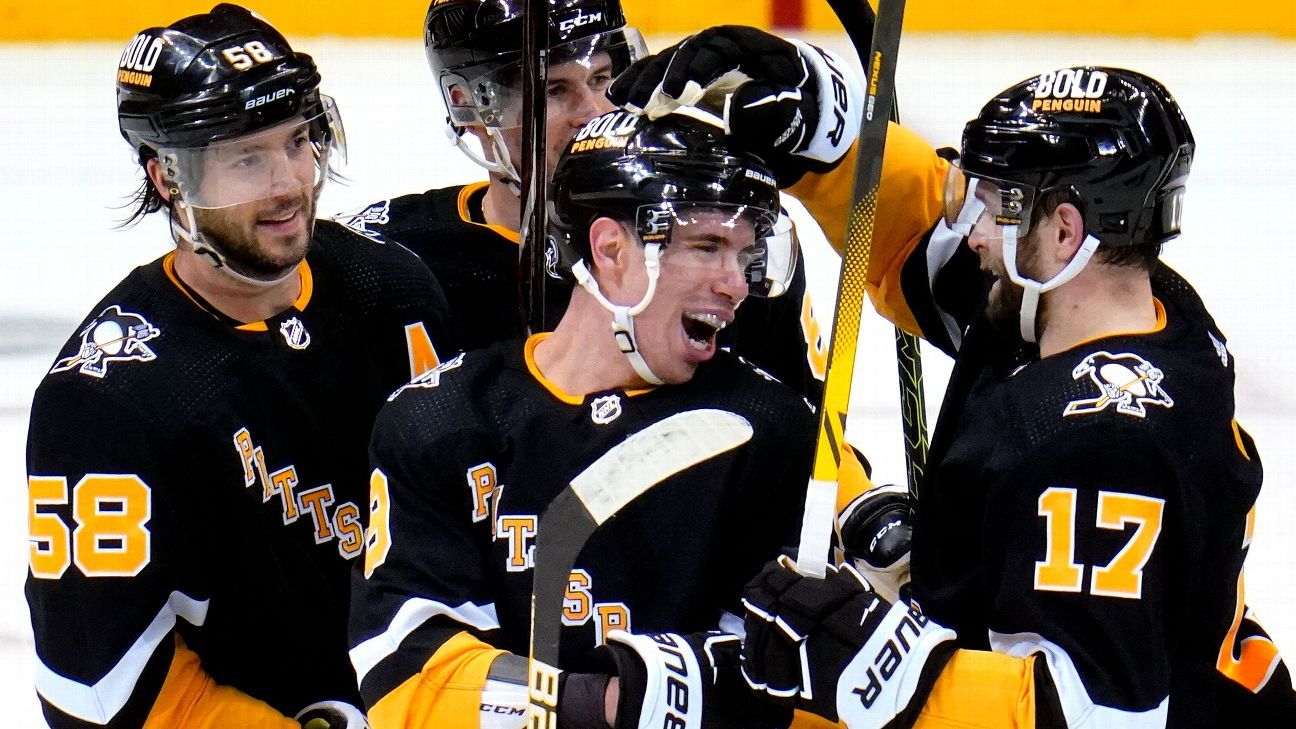 PITTSBURGH — The Pittsburgh Penguins enjoyed a strong six-goal start after a lengthy layoff.

A third-period lull allowed the San Jose Sharks back into the game, but Evan Rodrigues and Bryan Rust came through when Pittsburgh needed it most.

Rodrigues and Rust both finished off hat tricks in the third period and the Penguins beat the Sharks 8-5 Sunday for their eighth straight win — and first since Dec. 19.

According to ESPN Stats & Information research, Sunday was the first time the Penguins had two hat tricks in a single game since Dec. 11, 2008. Petr Sykora and Pascal Dupuis combined for six goals on that night.

“I loved the start we had,” Penguins coach Mike Sullivan said. “We brought a ton of energy at the start of the game. We were rewarded, but as a result, when you get up by that many goals, you’re fighting against human nature to stay diligent.”

Rodrigues and Rust each scored twice as the Pens built a 6-1 lead in the first period. Both added insurance goals in the final period, with Rodrigues completing his first career hat trick with 2:01 left and Rust scoring into an empty net with 11 seconds remaining. Rust had a career-best five points.

“I was shocked that there were any hats left,” Rust said.

For an esteemed franchise that prides itself on Stanley Cup championships and legendary names like Mario Lemieux, Jaromir Jagr and Sidney Crosby, it’s not often on a random Sunday that history is made. But Rust and Rodrigues managed to add to the club’s history.

San Jose scored three times in the first 4:09 of the third period but couldn’t overcome the huge deficit, which led to an early exit for goalie James Reimer. Alexander Barabanov, Brent Burns, Matt Nieto, Jacob Middleton and Logan Couture scored for the Sharks.

“If you would’ve told me that it would be a one-goal game with 2½, 3 minutes left in the third, I don’t think anyone would believe you,” Sharks defenseman Erik Karlsson said.

Casey DeSmith made 22 saves for Pittsburgh in place of starter Tristan Jarry, who is one of four Penguins in COVID-19 protocols. Pittsburgh hadn’t played since Dec. 19.

Kasper Bjorkqvist scored his first NHL goal and Jake Guentzel his 16th of the season for the Penguins, who have won eight or more games consecutively for the 11th time in franchise history. It’s the first time Pittsburgh has won eight straight since the 2018-19 season.

Rodrigues has a career-best 13 goals this season and has five goals and seven points in his past four games. He scored twice in the first 4:11.

The Sharks had won two straight, including a wild 8-7 win over Arizona on Dec. 28. They’ve lost four of seven overall.

Reimer allowed six goals on 17 first-period shots. Zach Sawchenko replaced Reimer in the second period and made 20 saves in his NHL debut.

“I understood the situation we were in,” Sawchenko said. “I was trying to give the team a spark. Luckily enough, we made a comeback, and just fell a little short.”

The Penguins scored six or more goals in a period for the 16th time in franchise history and first since Nov. 27, 2019. Pittsburgh also tied a team record for most goals scored in the first period of a game. There have been only three instances in team history where Pittsburgh scored more than six goals in a period, most recently Feb. 27, 1995.

Burns scored a second-period power-play goal, then the Sharks cut it to 6-5 early in the third.

DeSmith misplayed Nieto’s point shot 20 seconds into the period, and it caromed off the end boards, banked off the Penguins goaltender and into the net.

Middleton’s slap shot from the point made it a two-goal game at 3:01 of the third, while Couture, playing in his 800th NHL game, finished a one-timer from Timo Meier to make it 6-5 at 4:09.

Rust and Guentzel played for the first time after extended absences, much to the delight of the home crowd. Rust missed the previous 11 games because of a lower-body injury, while Guentzel hadn’t played since Dec. 6 at Seattle because of an upper-body injury.

Guentzel has 13 goals in his past 13 games. He also has points in each of his past 14 games and goals in his past six. Guentzel is the second Penguin in the past 10 years to record a point in 14 straight appearances, joining Dupuis during the 2011-12 season.

Shoaib Akhtar Moves Away From Biopic, Threatens “Severe Legal Action” Against Makers
UGA reviewing circumstances of crash, AD says
India vs New Zealand: India vs New Zealand, 2023 Live Cricket Score, Live Score Of Today’s Match on NDTV Sports
Joey Votto isn’t just a future Hall of Famer; he is the future of the Hall of Fame
What to watch as the PGA Tour moves to Torrey Pines