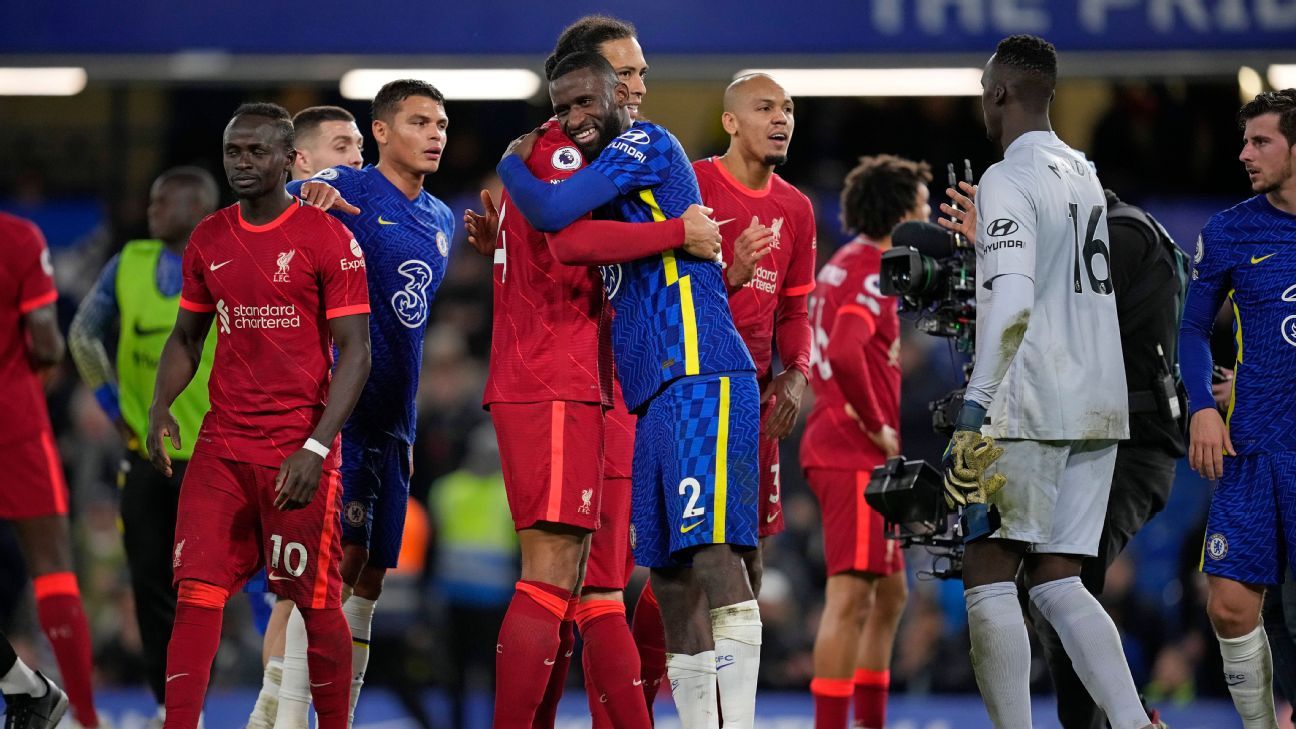 LONDON — Manchester City have shown themselves to be in a league of their own, so the Premier League should be thankful that Chelsea and Liverpool are still able to keep us all entertained. Sunday’s 2-2 draw at Stamford Bridge helped neither team and only consolidated City’s vice-like grip on top spot, but football is about jeopardy, risk and overcoming flaws, and when it all comes together, you get an unforgettable game like this one.

Even before City moved 11 points clear at the top of table with a 2-1 win at Arsenal on Saturday, this second-versus-third clash was always a case of both sides needing to win to maintain faint hopes of catching Pep Guardiola’s winning machine. City’s win at the Emirates was their 11th successive Premier League victory and they have all been won with such monotonous ease, scoring 33 goals and conceding just seven, that every three points is now met with little more than a shrug of inevitability.

Barring an unlikely collapse in the second half of the season, City will win a fourth league title in five years and you will struggle to count on the fingers of one hand the times they have had to dig deep into their reserves to overcome adversity during that period. Guardiola has built one of the all-time great teams in English football history during his six years at the Etihad, but they may simply be too good to contribute to games like this one.

Chelsea and Liverpool gave us such a pulsating encounter because they both have weaknesses that can be exploited by their opponents. And as a result, they both had to take risks in an attempt to secure a crucial victory.

And they also had to go into the game with unwanted distractions hovering over both clubs.

Chelsea, with three wins from their past eight in the league, were without £97.5 million striker Romelu Lukaku, dropped by coach Thomas Tuchel because of an outspoken interview about his failure to impress so far at Stamford Bridge since returning to the club from Internazionale in the summer. And Liverpool were without manager Jurgen Klopp, goalkeeper Alisson, defender Joel Matip and forward Roberto Firmino — all isolating because of COVID-19.

City, in contrast, have enjoyed a remarkably serene run of successes since losing to Crystal Palace in October, which is why they are free-rolling to another title. But the Premier League is regarded as the most exciting in world football because of games like this and teams like Chelsea and Liverpool and the drama they create.

From the first minute, when Sadio Mane was fortunate to escape a red card for appearing to strike Cesar Azpilicueta in the face with an elbow after just 14 seconds, the game was incident packed. Azpilicueta later said it was a “clear red card” when interviewed after the game.

Christian Pulisic, playing centrally in the absence of Lukaku, wasted a golden chance to open the scoring on seven minutes when, with only stand-in keeper Caoimhin Kelleher to beat, he was indecisive and allowed the youngster to smother the ball. It proved a costly miss when, two minutes later, Mane took advantage of his lucky escape from a sending off by pouncing on a mistake by Trevoh Chalobah to score.

Chelsea were in disarray and Liverpool looked like the team that won the title in 2019. When Mohamed Salah made it 2-0 on 26 minutes with a stunning near-post finish after gliding past Marcos Alonso, it seemed as though Liverpool were about to give Chelsea the kind of hammering they inflicted on Manchester United during a 5-0 rout at Old Trafford earlier this season.

Liverpool were unable to score a third, though, and two Chelsea goals in the space of three minutes at the end of the first half turned the game on its head.

When Kelleher punched Alonso’s in-swinging free kick clear on 42 minutes, the keeper looked to have done well to deny the Chelsea defender. But the ball dropped the Mateo Kovacic on the edge of the penalty area and, as he was backpedaling, the midfielder somehow guided a volley beyond Kelleher and into the net. It was a spectacular display of technique by the former Real Madrid player and it gave Chelsea a foothold back into the game.

And it took them just three minutes to score the equaliser when Pulisic atoned for his earlier miss by latching onto N’Golo Kante‘s pass before beating Kelleher with a precise left-foot shot past the Republic of Ireland international. As the chaos continued on the pitch, Mason Mount almost put Chelsea 3-2 up in first-half stoppage time with a scuffed volley that bounced just wide of the post.

When a game is so eventful in the first half, it rarely delivers a second half of the same quality due to coaches plugging the holes that had led to the earlier excitement. But while the goals stopped flowing, the entertainment didn’t.

Salah forced a crucial save from Edouard Mendy with a 25-yard lob on 57 minutes and Mane was also denied by the Chelsea keeper. Kelleher, not to be outdone, then produced a stunning save to prevent Pulisic from scoring his second of the game.

In total, there were 25 chances over the 90 minutes, with both sides registering six on target. Neither could find a winner, though.

“For the outside world it was quite a good game to watch, but we came here for three points and didn’t get them,” Liverpool defender Virgil van Dijk said.

Even if one team had done enough to claim all three points, it’s difficult to imagine they would have been able to close the gap on City, who are destined for another title. And the challenge facing both chasing clubs only grows more daunting in the next month, with Salah (Egypt), Mendy and Mane (both Senegal) now heading off to the Africa Cup of Nations in Cameroon.

But the Premier League still knows how to excite, even if the title race is already a foregone conclusion.