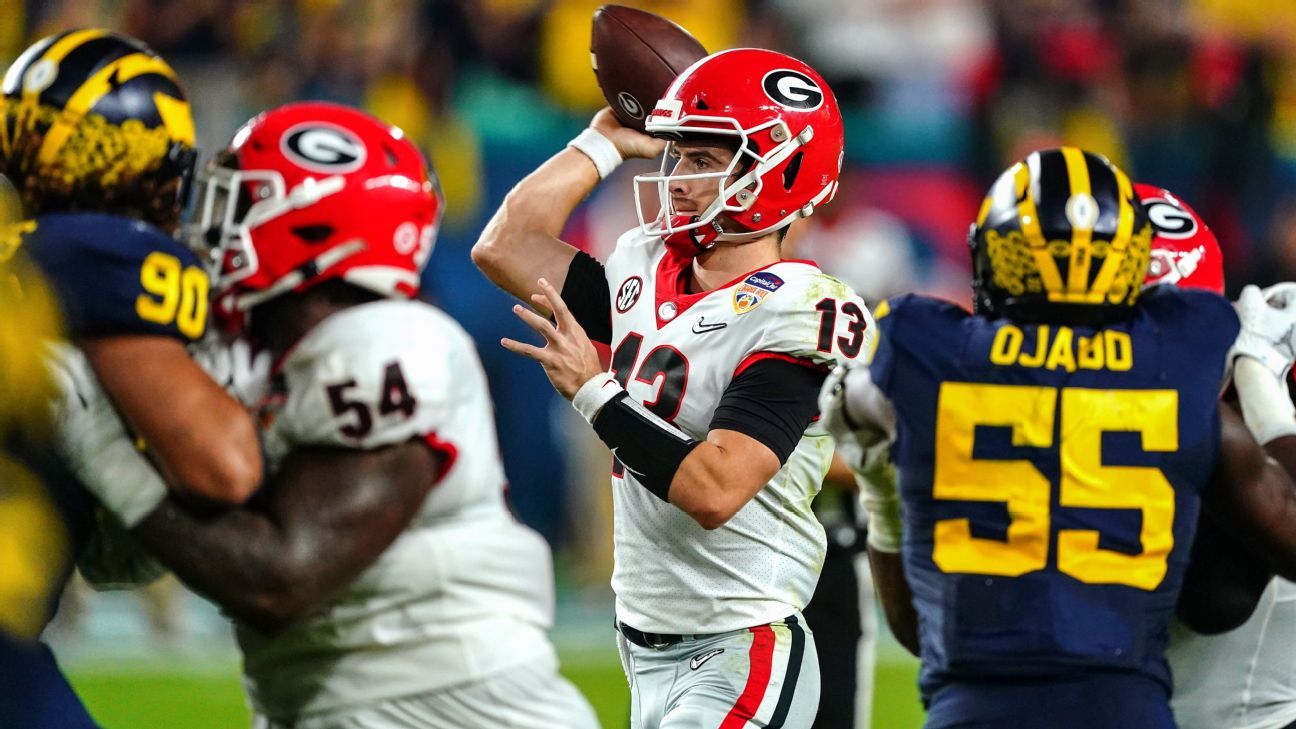 MIAMI GARDENS, Fla. – Georgia will get another chance at trying to beat Alabama and finally end a 41-year drought without a national championship.

Less than a month after the No. 3 Bulldogs fell for the first time this season, to the Crimson Tide in the SEC championship game, they secured a rematch by dismantling No. 2 Michigan 34-11 in a College Football Playoff semifinal at the Capital One Orange Bowl at Hard Rock Stadium on Friday night.

Georgia will play No. 1 Alabama in the CFP National Championship presented by AT&T on Jan. 10 (8 p.m. ET, ESPN and ESPN App) in Indianapolis. The Bulldogs will try to end a seven-game losing streak to the Crimson Tide.

Georgia coach Kirby Smart will try to beat his mentor, Nick Saban, for the first time after losing four in a row. The Bulldogs had a lead in each of those four defeats, including double-digit leads in three of them. Saban is 25-1 against his former assistants, losing to Texas A&M’s Jimbo Fisher for the first time this season.

It’s the second time Alabama and Georgia will play in the CFP National Championship; the Tide won 26-23 in overtime in Atlanta at the end of the 2017 season.

Georgia will try to win its first national championship since 1980. Alabama will attempt to win its seventh under Saban since 2009 and back-to-back titles for the second time in his tenure (2011-12). Saban’s teams are 9-2 against the Bulldogs while coaching at LSU and Alabama.

It was quite a bounce-back performance for the Bulldogs, who looked overmatched in a 41-24 loss to the Tide on Dec. 4. They overwhelmed Michigan, which was playing in the CFP for the first time and enjoying a renaissance under coach Jim Harbaugh. Georgia scored on each of its first five possessions and never punted (the clock ran out on its final drive) in building a 27-3 lead at the half. The Bulldogs are the first team to score on their first five possessions of a CFP game.

Georgia put the finishing touches on the Wolverines when quarterback Stetson Bennett lofted a 39-yard touchdown pass to running back James Cook down the left sideline with 11:11 to go for a 31-point lead. Bennett, who was clobbered in the back by Michigan linebacker Michael Barnett just after he threw, raised his arms after Cook slipped behind two defenders for the score.

Bennett, a former walk-on, played one of the best games of his college career, completing 21 of 31 passes for 307 yards with three touchdowns.

The Bulldogs took the opening kickoff and drove 80 yards in seven plays for a touchdown, with Bennett throwing a 9-yard touchdown to freshman Brock Bowers for a 7-0 lead. It was Bowers’ 12th scoring reception, which set a Georgia single-season record.

With 4:41 to go in the first quarter, Georgia tailback Kenny McIntosh took a handoff to the right, stopped and threw an 18-yard touchdown to Adonai Mitchell to make it 14-0. The Bulldogs had been holding that trick play in their pocket for a while; McIntosh became the first tailback to throw a score since Thomas Brown had one against Florida in 2005.

After Jack Podlesny kicked a pair of field goals to push the lead to 20-3 late in the first half, Bennett struck once more with a 57-yard touchdown to Jermaine Burton down the right sideline to push Georgia’s advantage to 27-3 with 1:38 left in the half.

Bennett completed his first nine passes and finished 16-for-22 for 234 yards with two touchdowns in the first half. Georgia’s 330 yards of offense in the first two quarters were more than the Wolverines had allowed in 12 of their first 13 games this season.

Meanwhile, Michigan, which had scored 143 points in its previous three games, couldn’t muster much of anything against a Georgia defense that was surprisingly vulnerable against the Crimson Tide in its last game. The Wolverines turned the ball over three times, surrendered four sacks and went 1-for-3 in the red zone.

The Wolverines were stopped on fourth down at the Georgia 41 on their opening possession. Michigan’s offense had just one play longer than 20 yards in the first half-a 42-yard pass to Roman Wilson to the Georgia 19. But then the Bulldogs sacked Cade McNamara for an eight-yard loss on the next play, and Michigan had to settle for Jake Moody’s 36-yard field goal.

With Georgia throwing myriad screen passes, it didn’t allow a sack and held All-American Aidan Hutchinson to four tackles and only one tackle for loss. All-Big Ten linebacker David Ojabo didn’t have a tackle. Conversely, McNamara was pressured on nine of his first 24 drop-backs and could never get comfortable in the pocket.

Any hopes of a Michigan comeback in the second half were over after it turned the ball over on its first two possessions. Georgia’s Derion Kendrick intercepted McNamara’s pass in the end zone, and then Devonte Wyatt recovered Blake Corum’s fumble at the Georgia 47.

It was a disappointing end for the Wolverines, who won their first Big Ten title in 17 years to reach the CFP. They had won their previous five games, including a 42-27 rout of rival Ohio State and a 42-3 defeat of Iowa in the Big Ten championship game. Everything that had worked the past two months was no match for Georgia’s speed, however.

Sources: Alabama to hire Notre Dame OC Rees
St. Andrews to remove Swilcan Bridge walkways
Formula 1: Ford to return after 22 years out of sport
Navarrete wins back-and-forth slugfest vs. Wilson
After missing World Cup and struggling for form, Matthew Hoppe’s focusing on what he can control