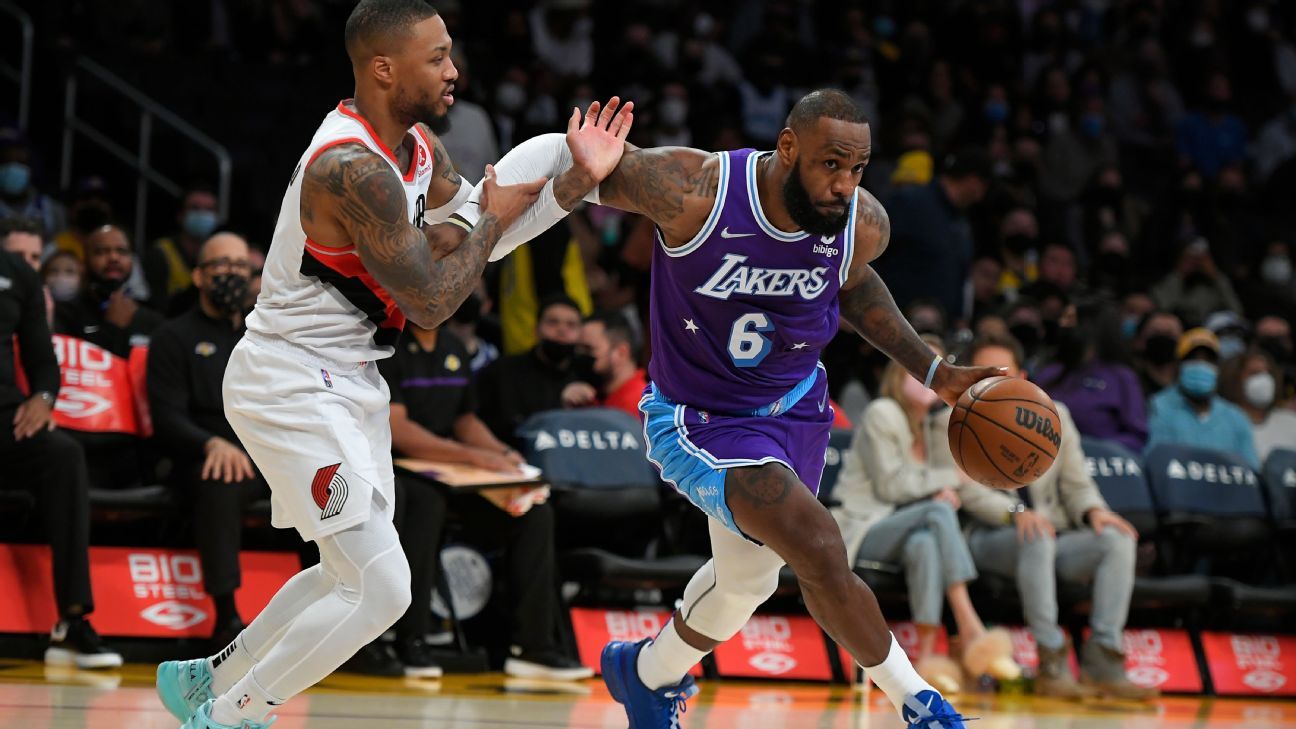 LOS ANGELES — If 2022 goes anything for the Los Angeles Lakers like LeBron James‘ first game since turning 37, L.A. could have big things in store.

James scored a season-high 43 points in just 29 minutes in the Lakers’ 139-106 win over the Portland Trail Blazers, dominating the action from the start as he scored the game’s first five points in the first 46 seconds and kept pouring it on from there.

According to ESPN Stats & Information research, James became the oldest player with 40 points in under 30 minutes of play as well as the oldest to have at least 40 points and 14 rebounds.

“I literally try to prepare my mind and my body and my soul on how I can stay young in a young man’s game,” said James, who said his birthday celebration Thursday centered around watching movies on the couch with his family, having some wine and tequila and being in bed by 10:30 p.m.

“Sometimes you do have to remind people that you can still do what you do at a high level, and I’ve just been blessed, very blessed and continue to put the work in,” he said. “Because that’s what it all boils down to. It boils down to putting the work in and everything else will take care of itself.”

James took to Instagram afterward to revel in his first game as a 37-year-old.

The Lakers, now 18-19 and No. 7 in the Western Conference, have their work cut out for them in the second half of the season. After squandering a friendly schedule full of home games and lesser opponents over the last couple of months, things are set to become much tougher.

But if James can continue the tear he’s on, you can’t count L.A. out.

Friday was his seventh straight game scoring 30 points or more, his longest such streak since 2013, and his 28.0 points per game average this season is his best since playing for the Cleveland Cavaliers in 2009-10. James is the oldest player in NBA history with seven straight 30-point games, according to ESPN Stats & Information research.

While L.A. slipped in the standings in December, going 6-8, it was an incredible month for James. He became the oldest player in league history to average 30 points per game in a month, surpassing Jordan, who was 34 when he put up 30.7 points per game in January 1998. It was the third time in his career that he had 10 30-point games in a calendar month, but the first time he’s done it since 2006.

And Friday was an incredible capper, as he did all his damage in just 29 minutes of playing time, marking the first time in his career that he has scored 40 or more while playing under 30 minutes. It was just the second time in his career that he scored 40 while also having zero turnovers. He did it for the Miami Heat on March 18, 2014, while playing against Cleveland.

James is averaging 36 points on 58% shooting overall and 42% from 3-point range over the past seven games, adding 11 rebounds and 6.1 assists per game while picking up the slack in Anthony Davis‘ absence since he went down with a sprained MCL in his left knee. He’s just the sixth player in league history to hit that stat line over a seven-game stretch, joining Jordan, Larry Bird, Kareem Abdul-Jabbar, Wilt Chamberlain and Elgin Baylor as the only others to do so.

“I’m not a guy that just goes out and just sees if I can jack a bunch of shots,” said James. “I want to be efficient every single night or anytime I’m playing. So as long as the streak I’ve been on, as far as my scoring, I’ve been extremely efficient as well. I take way more pride in that than the scoring. That’s just who I am as a basketball player.”

Lakers coach Frank Vogel said James continues to give L.A. hope even though the season has been difficult so far.

“He exemplifies going out and playing until exhaustion,” said Vogel, adding that James called for a sub because he had exuded so much energy at one point. “That’s how we want our group to play, that’s how we should play the game, so play the game to exhaustion and he’s showing that.

“And then his energy in film sessions and all of our work away from the game is like a mental energy. He brings [that to] our team, and the positivity… There’s so much noise around our team and negativity and he doesn’t let that, allow that to filter into our group.”