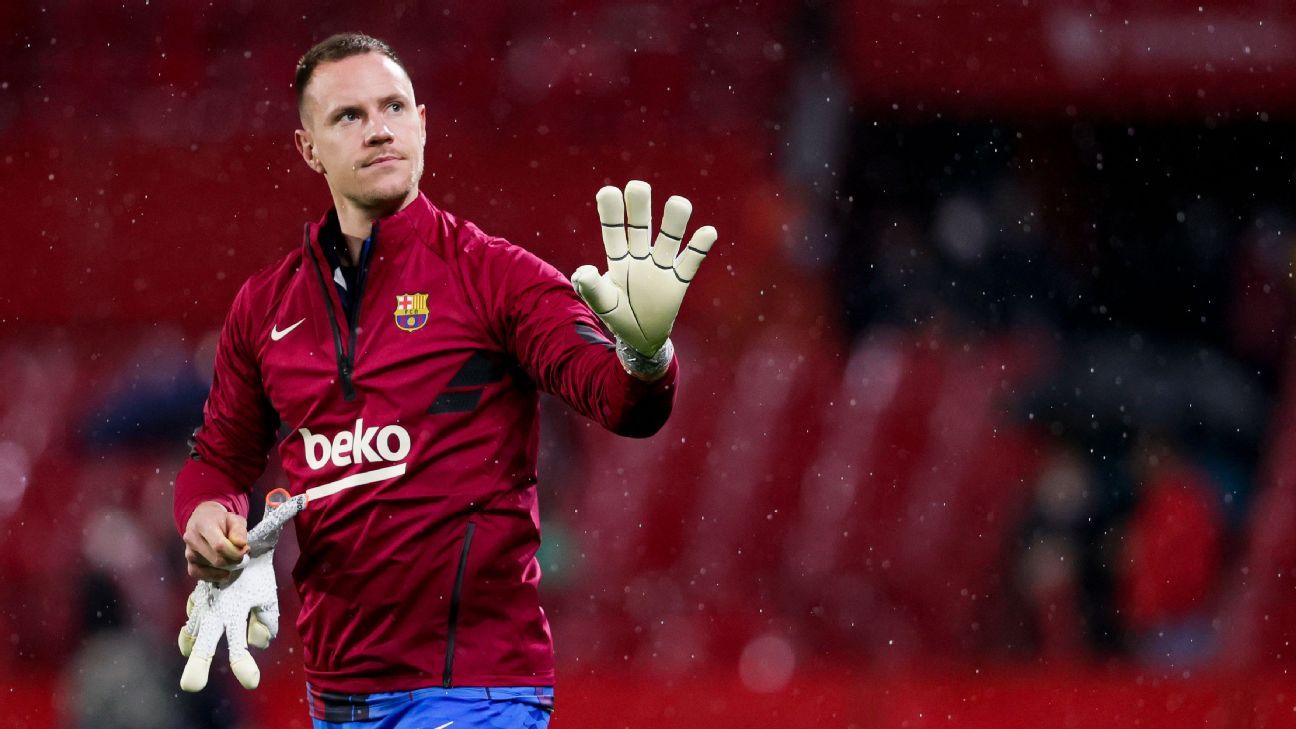 Here’s a little game everyone can play, which is ironic really, because it’s the games not everyone can play that brings it to mind. Of all the managers at Spain‘s first division LaLiga clubs, who do you think is currently the best player? If you stuck them in their team, how good would they be?

A year ago, you would have probably said Zinedine Zidane when he was still at Real Madrid. Or perhaps Atletico Madrid‘s Diego Simeone. You wouldn’t fancy fighting him, for sure: he still looks pretty hard. These days, it’s probably Barcelona‘s new boss, Xavi Hernández: that brain hasn’t slowed, and it was never really about the legs anyway. But if you actually think about it, the winner is probably Rayo Vallecano‘s Andoni Iraola, who’s still not even 40. Not that it’s just about age. It’s true that Alessio Lisci is younger — only five months older than his own striker Roberto Soldado, in fact — but he wasn’t an especially good footballer in the first place. Still, he looks like he could run about a bit.

The first of those might be a bit easier, although Ghana might not thank you for the reminder. In Uruguay training games, Luis Suarez is often the rush goalkeeper. In his home in Montevideo, there is a wooden trophy of a goalkeeper stretching for the ball, thanking him for making that save at the 2010 World Cup. There’s also a worn-out photo his mother had. In it, Suarez is six, smiling alongside his Deportivo Artigas teammates. He’s the one wearing the goalie gloves.

There have been a few hints for the goalkeeper on the pitch question too. Everyone keeps going on about how good Marc-Andre ter Stegen is with the ball at his feet, and he started there until, aged about 10, when a coach reckoned he ran “strange.” Then there’s Thibaut Courtois, going up for the corner that led to Real Madrid getting a late, late goal at Valencia. “Well,” he said afterwards, “I’m two metres (6-foot-5) tall: that frightens people.” And Sevilla have two goalkeepers who actually scored last season, for goodness’ sake. So, Bono or Marko Dimitrovic it is, then.

Here’s one more: who’s the best player in Spain that you’ve never heard of? Not yet, anyway.

This weekend, you might actually find out. Well, not the manager question, alas — and not just because Diego Simeone has tested positive for COVID-19 — but you genuinely could get the answer to the others. And you will definitely hear a few names you knew nothing about before. Hopefully not for the last time — from crisis comes opportunity and all that — although quite honestly, that’s a possibility too. Because this weekend looks set to be a little weird.

Look, by the time you read this, things may have changed. They will have changed, in fact. Hopefully for the better, but there’s no guarantee of that. Every minute it seems things move and new names emerge. For now, though, here’s the basics:

At the time of writing, more than 200 Spanish football players across the first and second divisions have tested positive for COVID-19 and are unavailable for selection as the football starts up again in Spain this weekend.

Now, football is not the most important thing of course, but we’d be fooling ourselves if we thought it doesn’t matter. It is, as they say, the most important of the unimportant things. And here’s the basic point here: football will be going ahead, almost no matter what. And the “what” is pretty big here. That’s despite the fact that, to give just one example, Barcelona travel to Mallorca on Sunday with only nine first team players available. And two of those are goalkeepers. Oh, and one is the striker (Luuk de Jong) they hope to shift out of there. And if it can be by Sunday, then so much the better.

It’s not all about COVID-19, mind you: Dani Alves has it, but couldn’t have played anyway because he’s not registered yet. Nor is Ferran Torres. Sergi Roberto, Martin Braithwaite, Ansu Fati, and Memphis Depay are injured, not ill, and Sergio Aguero has retired. But there are currently seven players who have tested positive and are unable to play.

Gab Marcotti explains how Real Madrid have the finances for two huge transfers in the summer.

At Atletico Madrid, Antoine Griezmann, Koke, and Joao Felix all tested positive. At Madrid, seven players tested positive just before Christmas. Some are available again now. This week, Courtois, Vinicius Jr., Federico Valverde and Eduardo Camavinga did too, although Courtois has since tested negative again. Christmas has seen footballers — and not just footballers — mix with families and friends, the guard drop, the figures through the roof.

Its impact is less than with normal people, at least immediately, but the long-term is harder to know. In health terms at least; in professional terms, they too have to be off work, although Spain has just dropped isolation times from 10 days to seven, and that means matches. COVID-19 tears through them like it does everyone. Obligatory PCRs before returning to work have revealed the cases, and there are lots of them.

There was a league table in one of the sports dailies on Thursday morning. It was a COVID-19 league table: Rayo Vallecano are top with 14 cases — that’s more first-team players infected than are available — with Real Sociedad in second (10), Celta Vigo third (9), and Elche fourth (8). Atletico were doing so well, on none until Thursday night. That left only Granada and Alaves on zero. By Thursday afternoon, Granada had announced four — they didn’t say who — and Alaves has six, but none were players.

In the second division, more than a fifth of footballers have tested positive. Over 200 players are across the divisions — for now, and that we know of. Getafe and Villarreal did not say whether they have players who are positive, but soon we will see because all of the teams will play this weekend.

You may still worry about players, but do not worry about postponements. Unless something really dramatic happens, all of the games will go ahead.

They will do so in stadiums with reduced capacity after the Spanish government agreed to take the total permitted to 75% for January. Only Valencia vs. Espanyol could be at 100% (although it won’t be), because it is being played on Friday, i.e. still in December.

These restrictions will also apply to the cup games that begin in January, which has an impact too. To take one example: third-tier Alcoyano have already sold all their tickets to face Real Madrid. They are now contemplating adding supplementary stands, which they would not fill nor have any intention of filling, to be able to allow those who have bought tickets to still get in.

Well, it’s a creative solution — another one — and all over Spain, teams are going to have to come up with them, on the pitch in particular.

Not everyone is happy with the protocols — some teams want greater flexibility and understanding, some consider it an irresponsible way to approach players’ health, more still are concerned with the competition — but it is what the clubs signed. And so there will be some strange looking sides this weekend, maybe some strange results too.

Now, it’s not quite that bad, of course, not least because Nico Gonzalez and Ferran Jutgla, who have already played for Barcelona, are available and not officially (contractually, at least) first-team players yet. (Nor are Abde Ezzalzouli, Alejandro Balde or Gavi, but all are positive for COVID-19). But it certainly demands solutions.

Here, although every LaLiga club has the right to request a postponement once before Matchday 30, they basically won’t be granted it because here the rules are far clearer and far simpler:

So solutions are sought. And no, they can’t sign up their own manager — more’s the pity and in fact, why not if he’s unregistered? — and they shouldn’t need an outfield player in goal, given that at least one has to be a goalkeeper, but the idea of a goalkeeper on the pitch, while a bit silly still, isn’t that silly. And would be a lot of fun. (Who wouldn’t want to see Ter Stegen in midfield?)

No, that may not be the best way of looking at it right now, and there is a more serious debate to be had, but it’s pretty much the only way right now. This is happening, like it or not.

There is one good thing, though, a theoretical “reward” for those clubs that work best on development: what absolutely will happen though is that kids will get a chance. So far this season, 62 youth team players have made their debut in LaLiga. This weekend, that number will grow. Rayo, whose B team play five divisions below primera, making the leap more daunting, have not given debuts to any yet. They will probably have to this weekend. Sometimes a crisis opens a door, if not always for very long.

There is one precedent.

Hit by a COVID-19 outbreak last season, with 10 positives and everyone who had travelled to play in Europe in midweek isolated unless they had antibodies, Granada were forced to go and play Real Sociedad anyway despite starting the game without the manager, assistant manager, physio, delegate, captain, vice-captain, goalkeeper, back-up goalkeeper, third-choice goalkeeper or fourth-choice goalkeeper. At the end of the game, in which Granada eventually broke the rules, a late substitution meaning that they fielded an ineligible team because they had fewer than five first-teamers on the pitch, the Real Sociedad manager Imanol Alguacil warned that this situation would “come to us all.”

So far, it hasn’t. For some, this weekend it will. Not as extreme, perhaps, but it will. And so fresh stories will be told.

Back then, Granada were in a position where they were forced to give eight players a debut. One of them, an 18-year-old goalkeeper appropriately named Angel, saved a penalty. It didn’t mean the start of a new career, at least not yet — a year and a penalty save later, he’s not in the first team squad — and this weekend may not bring discovery either, but looking on the bright side, it will bring something new, something a little different. A quiz at least, a moment to remember one day, another little game to play while the show goes on.