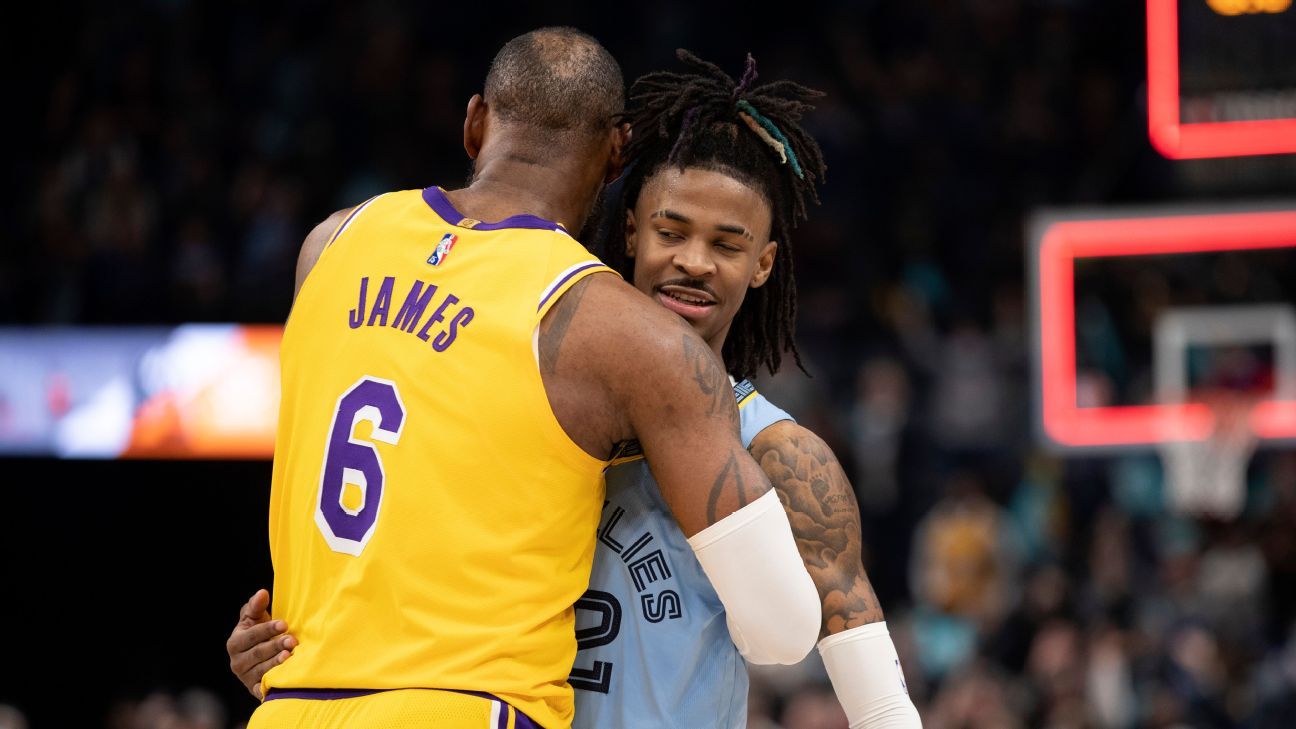 The Los Angeles Lakers were seemingly in control, up by 13 late in the third quarter, before Ja Morant nearly outproduced them on his own down the stretch in the Memphis Grizzlies‘ 104-99 win on Wednesday.

Morant scored 16 of his 41 points from the 3-minute, 38-second mark in the third through the final buzzer, keying a 37-19 push by Memphis to finish things off.

“When you shoot the ball as well as he did tonight from the perimeter, with his speed and his athleticism, it’s gonna be hard to contain a guy like that because he’s doing the whole three levels of scoring,” said LeBron James, whose 37 points, including eight 3-pointers to tie a career high, went for naught. “You can’t — there’s nothing you can do. He has you at his beck [and call].”

It was the second time Morant topped 40 points against the Lakers this season in the two times he played them.

He shot 13-for-27 from the field Wednesday, including 6-for-7 from 3-point range, and was 9-for-12 from the free throw line, adding 10 rebounds, two assists, two steals and two blocks.

As strong as his final flourish was, he was equally impressive earlier in the game when he scored 16 points in a row for the Grizzlies bridging the late second quarter and early third.

“We started fouling, man, and he went to the free throw line and started seeing the ball go in and he got his rhythm that way,” Lakers guard Malik Monk said. “And when a guy gets it going like that, there’s not much you can do.”

The comeback thwarted what could have been a 2-0 road trip for the Lakers to get them back to .500 after a win in Houston on Tuesday. Instead, L.A. (17-19) is looking at the No. 8 spot in the Western Conference standings as the season nears the midway point, with Memphis (22-14) strengthening its grip on the No. 4 seed.

“Obviously, Ja, what an unbelievable night by him, the tone he was setting throughout the game,” said Grizzlies coach Taylor Jenkins. “When he got going, it just kind of fueled everyone else and we kind of just broke loose there in that third quarter.”

Morant did finish with six turnovers, including three in the fourth, but it was the Lakers who were left lamenting their 18 turnovers, which led to 21 points for the Grizzlies.

“We understand that we have a lot of attackers, but the careless turnovers where literally you just turn the ball over, there’s no pressure or reason for it, those are the ones that get us in trouble,” said James.

James’ most glaring miscue of the night came with 6.7 seconds left and the Lakers trailing by 3, when he threw the ball away to the Grizzlies, denying L.A. the chance to attempt a game-tying bucket.

“The one thing I think probably hurt us the most down the stretch was the turnovers and the one more play, where [L.A. failed to execute] the easy play to make one more pass to the open man,” said Lakers acting head coach David Fizdale, filling in while Frank Vogel is in the league’s health and safety protocols.

Westbrook, whose turnovers have been a common theme in Laker losses this season, shifted the blame elsewhere. He said the difference between L.A. closing out the Rockets in the fourth on Tuesday and failing to secure the win against the Grizzlies a night later came down to shot selection.

James accounted for a 2-for-6 mark in the fourth himself, with the rest of the team going 0-for-4, including a miss from Westbrook.

“You can watch the tale of the two and see where our shots come from,” Westbrook said. “Not much in the paint.”