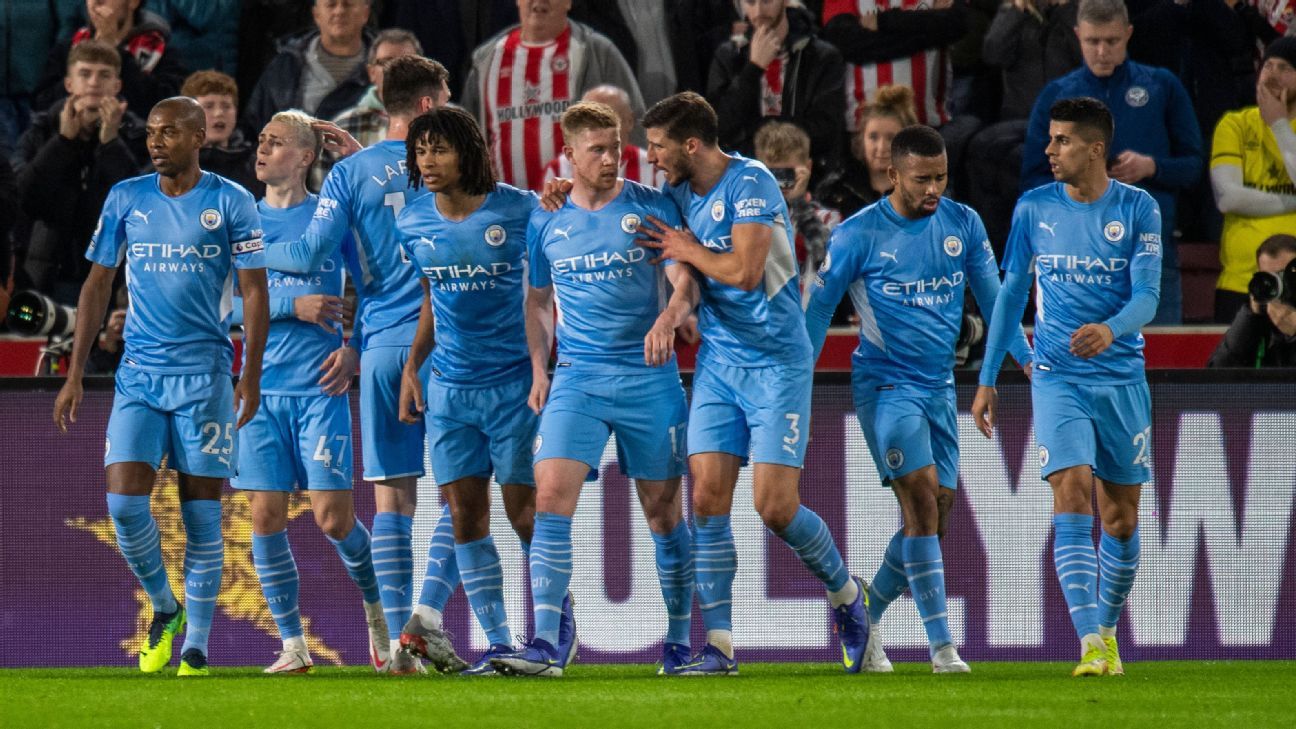 LONDON — Even when Manchester City fail to hit the heights we have come to expect of Pep Guardiola’s team, they still end up basking on the sunny side of the street. The Premier League champions laboured to a 1-0 win at Brentford on Wednesday, yet they ended the day having stretched their lead at the top of table and with the seal set on a record-breaking calendar year.

Liverpool‘s defeat at Leicester City on Tuesday had already given Man City an unexpected boost ahead of their first top-flight visit to Brentford since 1937, but Danny Welbeck‘s stoppage-time equaliser for Brighton & Hove Albion against Chelsea — while this game was still in play — enabled Guardiola’s side to move eight points clear at the top of the table in their final game of 2021. By the time Chelsea and Liverpool play each other at Stamford Bridge on Sunday, City could be 11 and 12 points clear of their closest — or maybe least-distant — challengers, respectively, if they start 2022 with a New Year’s Day victory at Arsenal.

“Fifty-four points to play [for]. Fifty-four. We were 4-0 [up] against Leicester and then in 20 minutes it was a 4-3,” Guardiola said after the match, downplaying the significance of his side’s rapidly growing lead over their title rivals. “Thanks for the nice words because we win, but I am not going to think it’s already done because Chelsea and Liverpool are more than exceptional.

Even though Man City were distinctly average at Brentford, winning only through Phil Foden‘s 16th-minute goal, it is impossible to bet against Guardiola’s players right now, so it will be a surprise if they don’t emerge with another three points from the Emirates.

That’s what City do. They just win, relentlessly. Outstanding or indifferent, the end result is usually the same for a team that is now on course for a fourth Premier League title in five seasons.

It is a team that has played without a classic centre-forward for most of this year, with Sergio Aguero‘s fitness issues preceding his summer departure to Barcelona and the failure to sign Harry Kane or Cristiano Ronaldo forcing Guardiola to play with a variety of false nines — £100 million winger Jack Grealish rotated that responsibility with Foden against Brentford — throughout this season. Just imagine how much further ahead they would be right now with Kane, Ronaldo or Erling Haaland at the sharp end of the team to convert all of those chances that Man City create.

Even though they don’t have a definitive No. 9, City have outscored all of their rivals this season by hitting 51 goals in 20 games — one more than Liverpool have managed from 19 league fixtures. Yet while they sit with a commanding eight-point lead having just passed the halfway stage of the season, it is Man City’s performance and statistics from January to December that really hammer home the reality of their dominance of English football.

Having started 2021 with a 3-1 win at Chelsea, City have won 36 of their 44 Premier League games during the 12 months of league action and scored 113 goals in the process. Their tally of 110 points in 2021 is a staggering 27 more than Chelsea and 33 more than Liverpool. City have played three more league games than Liverpool and two more than Chelsea, but even accounting for the COVID-19 impact on the fixtures, their dominance is there for all to see.

And in terms of goals, they have scored 32 more than an outstanding Liverpool team including Mohamed Salah and Sadio Mane and 43 more than Champions League winners Chelsea.

Man City have also set a new record of top-flight wins (36) in a calendar year, eclipsing Liverpool’s tally of 33 in 1982. The win at Brentford was their 19th away win in the league, which is another record — two more than Tottenham Hotspur in 1960.

Brentford did their best to give City a frustrating end to 2021 with Thomas Frank’s team going close through Frank Onyeka and Yoane Wissa before Foden scored with a first-time finish from Kevin De Bruyne‘s cross — remarkably, it was the Belgium midfielder’s first Premier League assist of the season. The home side dug deep and restricted City to just four efforts on target during the 90 minutes, but Guardiola’s never really looked anything other than comfortable.

They didn’t cut loose and inflict the kind of defeat on Brentford that others have had to endure this season, but City were always in control. The same applies to the title race: eight points clear and coasting.

Don’t expect them to blow it.