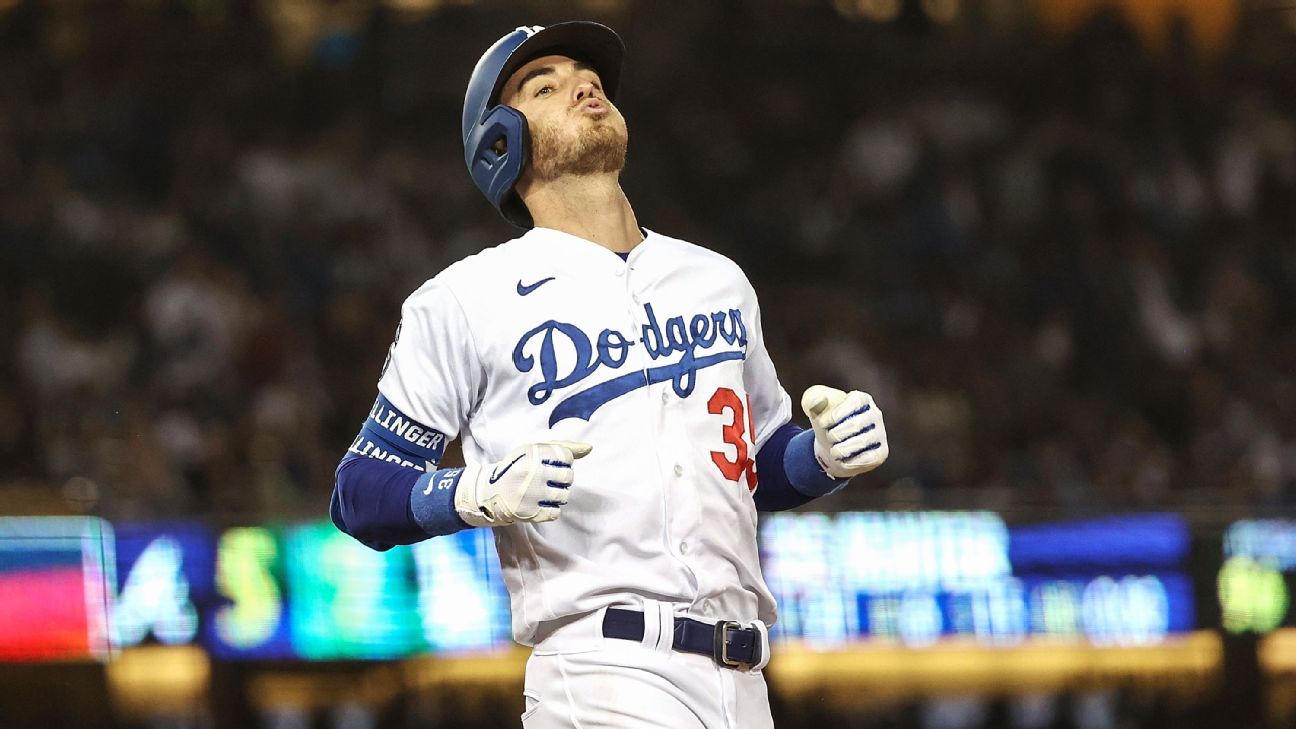 Once upon a time (just two years ago!), Cody Bellinger was one of the best players in baseball on one of the best teams in baseball. Through the Dodgers outfielder/first baseman’s age-23 season, he had posted 15.0 WAR, with a 2019 figure of 7.7 WAR leading to a National League MVP. It was one of the best seasons by a player age 23 or younger in baseball history — ranking among the top 50 by WAR on a list that includes, over the past 30 years, Mike Trout (four times), Alex Rodriguez (twice), Mookie Betts, Ken Griffey Jr., Albert Pujols, Bryce Harper, Grady Sizemore and Troy Glaus.

If you’re waiting for the but, brace yourself because it’s a hefty one. Bellinger regressed heavily in a pandemic-shortened 2020, then this year he was the third-worst position player in baseball (-0.8 WAR, ahead of only Jackie Bradley Jr. and the since-released Gregory Polanco) and the second worst at the plate (48 wRC+; Bradley Jr.), minimum 350 plate appearances.

He re-upped with the Dodgers just before the lockout for $17 million (news broke recently), a meager and basically compulsory raise from his 2021 salary of $16.1 million. He’ll go through arbitration just one more time, then become a free agent after the 2023 season, so the ship needs to be righted soon to justify his salary and contribute to the next Dodgers playoff squad.

You can pull up Bellinger’s awful surface numbers to see what happened, but there isn’t much there: He’s just way worse at everything, somehow.

Here’s a visual representation of his hitting regression using three key numbers that tell the story more coherently, via our friends at FanGraphs (consider becoming a member).

This number is defined as Bellinger’s rate of swinging at pitches that are outside the zone (swings at outside pitches divided by outside pitches). There’s a reason that “power and patience” is a commonly referred-to skill set, because having just one is kind of useless, as big league pitchers can easily make the adjustment to attack a one-dimensional hitter.

We’ll get to the power next, but chasing pitches outside the zone is risky for any player — especially one whose value is so heavily tied to hitting for power and who has a hellacious high-maintenance swing. Take a nosedive in pitch selection, then you can’t drive the ball as often, pitchers start nibbling, you start to change what you’re doing, maybe you guess at pitches, and now you’re twisted into a pretzel of doubt.

Baseball Savant has plate discipline rankings that put a run value on every pitch thrown all season and the corresponding hitter’s decision. Bellinger tied for sixth worst in baseball in the overall metric (-21 runs) and was fourth worst on a per-plate-appearance basis. He ranked second worst in baseball on a rate basis in the “shadow” part of the zone (the edges of the strike zone), jiving with what you’d expect from the slow-pretzel-twisting theory.

The exact calculation here is a bit of a black box, calculated by BIS and available via FanGraphs, thus available for the handy graphic. I prefer the more objective Statcast metric (Hard Hit%, i.e. rate of balls in play hit 95 mph or harder) but it’s within a couple percentage points of each figure on the graph, so the impact is the same: Bellinger isn’t regularly hitting the ball hard like he used to. Bellinger’s max exit velocity was down in 2021 from his normal 111-113 mph area to 107 mph. His hard hit rate is folding in some contact skills as well, so it’s measuring overall contact quality, but the raw power is also down.

Let’s look at something more directly focused on power; don’t worry about the words or numbers below, just look at the colors. These side-by-side graphs, also from FanGraphs (great website name!), is measuring how much power (isolated power per pitch) Bellinger has versus four-seam fastballs by zone (relative to league average): 2019 on top (NL MVP with the whole strike zone flaming red), 2021 below it (the middle of the strike zone is now blue):

I pinpointed fastballs for this graph because it’s the real issue here. FA% refers to the rate of four-seam fastballs (i.e. the hardest-thrown fastballs, not the sinker or cutter type) thrown, with our friends at PitchInfo responsible for tagging the pitches. I point the data source out because more generic measures of what pitches Bellinger has faced will lump cutters and sinkers in with four-seamers, but four-seamers are the problem, so it’s best to isolate that.

If Bellinger’s recent injury history (dislocated shoulder in 2020 World Series, fractured left fibula, hamstring strain) is part of the reason behind the pretzel-twisting theory, one would assume there’s either less bat speed or more effort necessary for the same bat speed with that effort causing a lack of precision in contact and/or pitch selection.

I went through the locations of various pitches and Bellinger is getting pitched mostly the same by location for each pitch, but pitchers are fine with throwing him more four-seam fastballs. That has historically been the pitch you don’t want to throw him, see red zone of terror above from 2019. PitchInfo also tracks run value on every pitch (similar to Savant’s plate discipline grades) and Bellinger’s per 100 pitch run value on four-seam fastballs has gone from 1.91 in 2019 (17th in baseball) to -1.34 in 2021 (14th from last), similar in scale to his overall decline.

Take that in. The pitch that made him into an MVP is now the pitch that turns him into a utility infielder at the plate and pitchers are now throwing it to him much more often.

To recap, Bellinger has had some notable shoulder and leg injuries in the past year and has cratered in power, contact and plate discipline while we can assume feeling some (we don’t know how much) effect from those injuries and certainly is tinkering to try to solve this. I don’t think it’s helpful to slow down a bunch of swings to diagnose a mechanical issue from a couple of clips, but one way to measure tinkering is launch angle over time. Bellinger has hit both career highs and lows in launch angle (graph from Baseball Savant, years listed across the top), so it’s safe to say he’s still trying to dial it in.

Trying to line up the cause and effect here is tricky. Did the injuries lead to less explosion in his swing, which led to increased effort to maintain the raw power, which led to having to commit to pitches earlier, which led to lesser plate discipline, which led to chasing bad pitches thus bad results, which led to swing tinkering, and none of it can be reversed until he’s fully 100 percent healthy with a clear head and clean slate? That makes logical sense and is my best guess, but there are about 1,000 other potential explanations.

Bellinger was better in the playoffs with much better outcomes in a small sample, building on a positive trend late in the regular season. There was a noticeable reduction of violence in his swing to help simplify things, which I think was the best short-term route to get better results in key playoff scenarios. I would imagine he’ll look much more like the best version of himself in 2022 given these indicators and time to help him get into peak physical shape while clearing his head.

If Bellinger were in Tampa Bay, Oakland or Pittsburgh where no player is making $17 million in 2022, one of the faces of baseball just a year ago would be a clear non-tender/trade-for-a-middling-prospect candidate — but it was an easy call for the Dodgers to keep him around even if it is as a big-money role player who has value given his versatility and defense. His situation has similarities to where Kris Bryant stood with the Cubs last winter — an expensive former MVP with a decline in performance that injury played a difficult-to-pinpoint amount in causing — but Bellinger is still 26 years old with two years of control left. Now the question is if he can rebound into the 2019 MVP version or if what we saw throughout 2021 is what the Dodgers will get again next season.