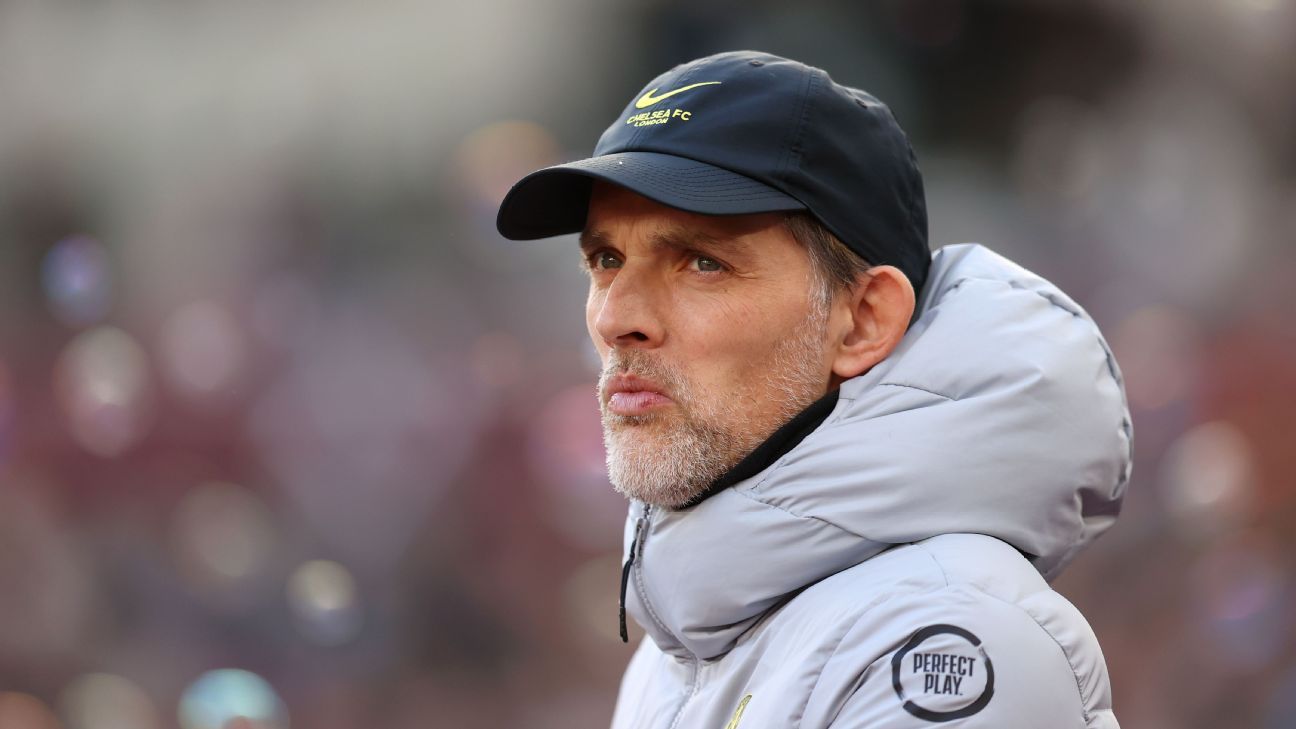 For the first time since he took the job at Chelsea last January, Thomas Tuchel is looking for answers.

He didn’t get the ones he wanted from the Premier League, who declined the club’s request to postpone their eventual 0-0 draw with Wolverhampton Wanderers on Dec. 19 after a fresh outbreak of COVID-19 cases within the squad. Tuchel would have welcomed the Everton match (1-1) to be rescheduled as well, but both went ahead, and the Blues dropped more points.

On the pitch, there are more riddles for the German manager to solve. Prior to their 3-1 win at Aston Villa on Boxing Day, they’d won just two of their past six in the league, dropping nine points in the process. It’s a pattern that doesn’t fit Tuchel’s overall tenure at the club: He lost just three league games from 19 in the 2020-21 season after replacing Frank Lampard on Jan. 26, and just two of the first 15 in the 2021-22 campaign. It leaves Tuchel trying to understand how they have slipped.

It’s pretty clear that the Blues aren’t as ruthless at both ends as they used to be. More importantly, maybe, opponents have worked out how Chelsea’s 3-4-2-1 formation functions, as their patterns of play are well established and can be countered. Should Tuchel change his formation or his tactics? He doesn’t think so. He sees the mini-crisis his team is going through at the moment as circumstantial, not structural.

Much like every Premier League manager, Tuchel has not been helped by injuries, positive coronavirus tests and suspensions. In midfield, the absence of N’Golo Kante (and, to a lesser degree, Mateo Kovacic) has been huge. His side struggles to defend and create when the France international isn’t there. Chelsea are such a different team without him, and sources tell ESPN that behind closed doors, Tuchel attributes his team’s bad run of form to Kante’s absence.

With Kante in the side, Chelsea have conceded five goals and kept eight clean sheets in 13 games across all competitions. Without him, they allowed 14 goals in 14 matches, with only five clean sheets. The team misses his vertical play and runs forward when they’re in possession, and his presence and work rate help create space for other players as well.

When Kante and Kovacic are missing, the two wing-backs (Reece James on the right, Marcos Alonso or Ben Chilwell on the left) almost become the only playmakers, with the forwards relying too much on this creativity from wide positions. They can do it, but it’s a lot to take on — especially now that Chilwell will miss the remainder of the season as he’s set to undergo knee surgery.

Tuchel was reluctant to play Kante for the full 90 minutes against Wolves nine days ago — it was his first game back after a month out — but the manager had little choice given the lack of other options. The No. 7 would end up making a late cameo in their midweek 2-0 win over Brentford in the Carabao Cup quarterfinal and then played just over an hour on Boxing Day as Chelsea fought back from 1-0 down to win 3-1 at Villa Park.

One issue for Tuchel is that he hasn’t found a way to mitigate the absences of Kante or Kovacic in the heart of midfield. Ruben Loftus-Cheek had his chance, but didn’t take it. There’s also no room for Saul Niguez in the rotation despite the excitement around his arrival on loan from Atletico Madrid in the final hours of the summer transfer window.

According to sources, Tuchel was never particularly convinced by Saul, before the loan was finalised or since, despite recognising the positive influence the former Atleti man has in the dressing room. That’s evident by the manager’s usage of him, having given him just 731 minutes (14 appearances) in all competitions — barely 20% of all available minutes — and even preferring James (vs. Zenit St. Petersburg) and Trevoh Chalobah (vs. Wolves) in Chelsea’s engine room rather than the specialist midfielder. Saul’s performances in those limited appearances have been poor, proving Tuchel right.

The other problem is that without Kante or Kovacic alongside him, Jorginho has been below par in his performances with and without the ball.

The Blues have conceded 11 goals in their past seven matches in all competitions, compared to eight in their previous 20. Tuchel’s frustration comes mostly from individual mistakes; he doesn’t understand how and why they continue occurring, and has asked his players for more focus. Some of the goals against Manchester United, West Ham United, Leeds United, Zenit or Everton have come from technical errors, lack of concentration, bad decision-making or poor marking, which you can simply attribute to individuals rather than the structure of the team.

He has used a lot of video analysis on game situations but also in training situations to assess the mistakes and how some of the players could and should have reacted differently. He’s had a lot of one-on-one discussions with some of his players — senior leaders and wide-eyed young players alike.

Offensively, there is a clear lack of efficiency. Apart from the Wolves game (0.8 xG), the European champions create chances and get good value shots on target, but they’re not scoring enough. Against Everton, they had 23 shots, 10 on target, 2.8 xG and just scored once. The story was a similar one against Man United and Burnley (1-1), registering 2.9 xG and 2.2 xG, respectively.

Tuchel is clearly still looking for the best formula going forward. With his staff, they continue debating which trio makes up the best front three. They have two indisputable inclusions in Mason Mount and Romelu Lukaku, but who is best positioned to be the third man? Timo Werner? Kai Havertz? Christian Pulisic? Callum Hudson-Odoi? Hakim Ziyech? Tuchel was hoping that one of them would have pulled clear of the pack by this point in the season, becoming the indisputable choice, but none of them have so it’s back to the drawing board.

In each of their past 14 games but one (at West Ham), Chelsea outplayed their opponent in terms of xG for and against, yet only won eight of them. Lukaku has been a big miss in front of goal in the nine contests he’s missed this season through injury and illness. Chelsea have had 16 different goal scorers in the Premier League so far this season, but only Mount has more than four, with seven — three of which coming in the 7-0 triumph over Norwich City on Oct. 23.

The answers have to come quickly, though, because by mid-January, Chelsea could be out of the Premier League title race if they don’t beat Manchester City on Jan. 2 and Liverpool on Jan. 15, hosting both of their biggest rivals at Stamford Bridge. They can’t afford to drop points against them. With a comeback win over Villa on Boxing Day and a midweek visit of Brighton & Hove Albion, there’s a chance to find a bit of form and positivity before that pair of must-win games.