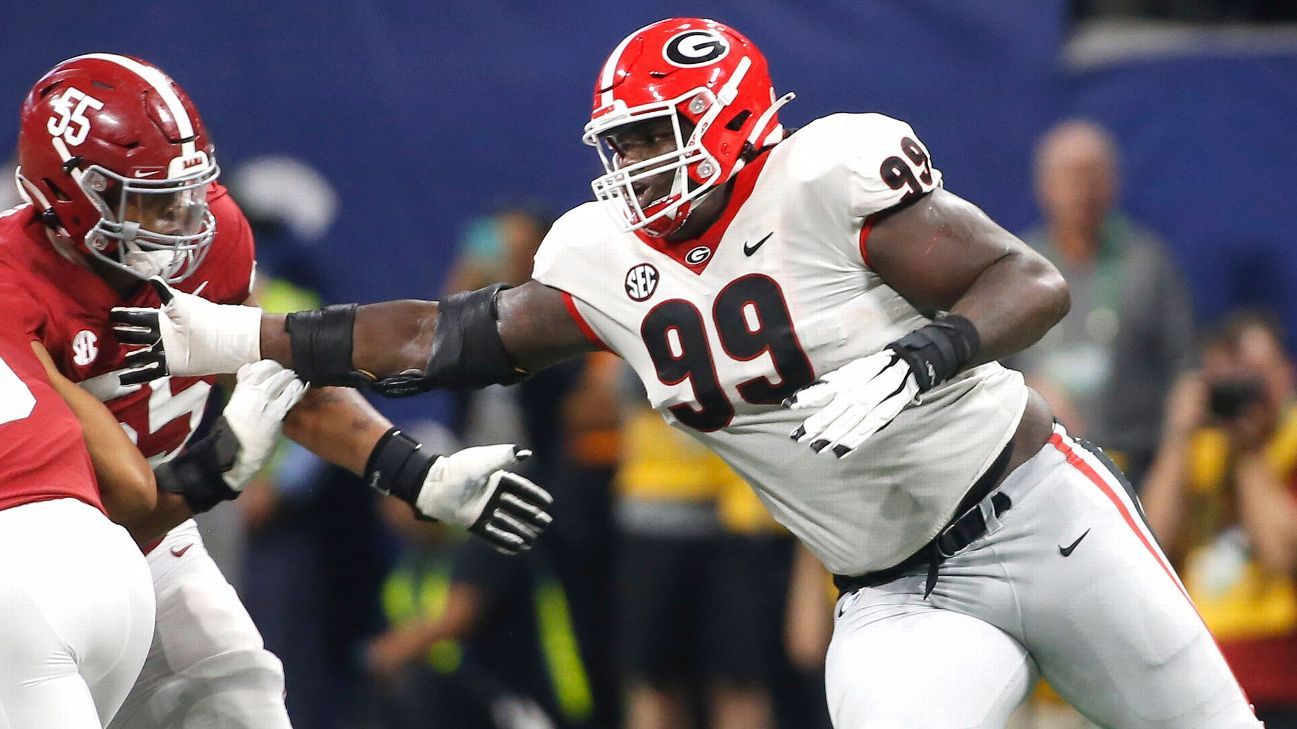 Jordan Davis knows what he’s supposed to say now — that the SEC championship game was weeks ago, that Georgia‘s loss was a setback but hardly the end of the journey, that the Bulldogs’ date with Michigan in the College Football Playoff (Friday, 7:30 p.m. ET, ESPN/ESPN App) has nothing at all to do with how Davis and the UGA defense was mauled by Alabama.

In fact, Davis may actually believe all that. Still, those negative thoughts creep into his head often enough that it’d be impossible to suggest Alabama’s 41-24 win over the seemingly invincible Bulldogs was completely behind him.

“Any game I lost, even in high school, it still hits me every once in a while,” Davis said. “But you can’t dwell on the past. Nothing you can do about it.”

That’s not exactly true, of course. Georgia’s defense — lauded through the first 12 games of the season as an immovable force, a unit that allowed just eight touchdowns all year before Alabama hung 41 points on it — could make changes, tweak the scheme, dive deep into the film of Bryce Young scorching the secondary and find ways to adjust.

Or, as linebacker Quay Walker put it: “You can only do three things: Focus on us, Michigan, and what we can do to get better.”

In other words, there may be lessons in that Alabama loss, but attempting to reinvent the wheel in the wake of that game is as likely to disrupt a still-dominant defense as it is to help. Georgia’s goal in prepping for the Capital One Orange Bowl wasn’t about beating Alabama — though a possible rematch is on the horizon — but rather: How can the Bulldogs’ D be the best version of itself?

“The challenge is there, and we have really worked hard on ourselves, fundamentally and to self-scout,” head coach Kirby Smart said. “What are we giving up? What are people seeing on us? What changes can we make that would be beneficial for us? That has all been our focus — how do we get better fundamentally, not about the last game.”

Still, that’s tough when the last game and the next game are separated by nearly a month. It’s also a different animal when the pundits spent an entire season raving about a unit as being among the best in recent memory, only to see that unit go down in flames in its biggest game. Georgia wasn’t just the No. 1 team in the country entering that game against Alabama. It was seemingly without a challenger. Then, in a flash, the narrative turned.

Can Georgia really erase the lingering effects of such a demoralizing performance so quickly?

In some ways, it might be best to let the loss eat away at the Bulldogs. As Smart noted, while so many outsiders looked at Georgia’s defense as something just shy of miraculous throughout the first 12 games of 2021, the coaching staff still saw flaws.

“If you sat in our meetings and know that in a lot of the games that people might say that we dominated or held guys to lower points, we didn’t play really well,” Smart said.

It’s something the coaching staff preached throughout the year — brutal honesty about technique and execution, Smart said. Still, the rave reviews poured in, and Georgia was inundated with what Nick Saban might have called “rat poison.” Perhaps that humbling in the SEC championship game was the needed antidote.

“[Alabama] did a great job against us, and I think they’ve left a little bit of hunger there for us to get an opportunity to go back out there and play again,” said defensive coordinator Dan Lanning, who’s pulling double duty in the playoff after being hired as Oregon’s new head coach.

That raises the question: Who is Georgia’s biggest opponent this week?

Is it Alabama, whose long shadow looms over anything Georgia does at this point? From the 2008 “blackout” game that exposed an overhyped preseason No. 1, to the 2012 SEC title game when an Aaron Murray pass fell just short of the end zone as time expired, to the 2017 national title game when Georgia lost in overtime, the Crimson Tide have always been the biggest obstacle between Georgia’s status as the best team without a recent national championship and being a team that’s actually won one.

Is it Michigan, the team awaiting UGA at the Orange Bowl, the obstacle standing between the Bulldogs and a trip to the national championship game? Smart raved about Michigan’s power running game and quarterback Cade McNamara‘s quick release, and recognized the immense challenge Georgia’s O-line will face against pass-rushers Aidan Hutchinson and David Ojabo.

“I don’t think you can call it a blueprint when its only happened once,” Michigan offensive coordinator Josh Gattis said of the Alabama loss. “Georgia is a really good defense but it does give us a little bit of confidence.”

Added Michigan WR Mike Sainristil: “Looking at the film [of the Alabama game], we understand where they can be attacked and we just want to keep attacking those spots.”

“We went to the doctor, seen what hurt us, what we didn’t do, how we didn’t execute,” Georgia linebacker Nakobe Dean said. “We worked on that. But at the same time, we’re on another opponent, so it’s a new game plan.”

Or is it simply Georgia itself? The long wait between the SEC title game and the Orange Bowl afforded Georgia ample time to address some issues — issues made obvious against Alabama, but also fault lines Smart and his staff saw all year.

“We’re not going to be the same team from last game to this game with Michigan,” Davis said. “We just have to keep moving forward and worry about ourselves.”

The truth might be that Georgia will face all three opponents in the Orange Bowl. Shaking off the lingering nightmare that was the SEC championship game is easier said than done, but a strong start against Michigan would certainly help. The Wolverines present a far different challenge than Alabama, too, and in many ways, their power ground game is a better matchup for the Bulldogs’ defense. There will be no rat poison this time around, either. Georgia has spent the better part of the past month talking about its failures, not its success. That might be a blessing.

After a wild regular season, bowl season is upon us, including the College Football Playoff. Here’s everything you need to know.
CFP preview &#187 | Complete bowl schedule &#187
Players, storylines for every bowl game &#187
Previews: Fiesta | Rose | Sugar

“It definitely didn’t put doubt in my mind about our defense,” defensive back Chris Smith said. “Obviously things didn’t go how we wanted them to go that day, but we’re focused on a new opponent. We’re focused on Michigan, and we’re focused on being able to get a win so we can move on to the next level of our season.”

That next level might well be a rematch with Alabama, which must get through Cincinnati on Friday in the Goodyear Cotton Bowl Classic. And if it is the Tide, the next round of questions will sound awfully familiar.

This Georgia team carries the weight of history — of 41 years without a national championship, of a single month of frustration following the latest loss to the Tide. The Bulldogs may want to ignore it, but ultimately, their legacy will be defined by how they embrace this opportunity to rewrite it.