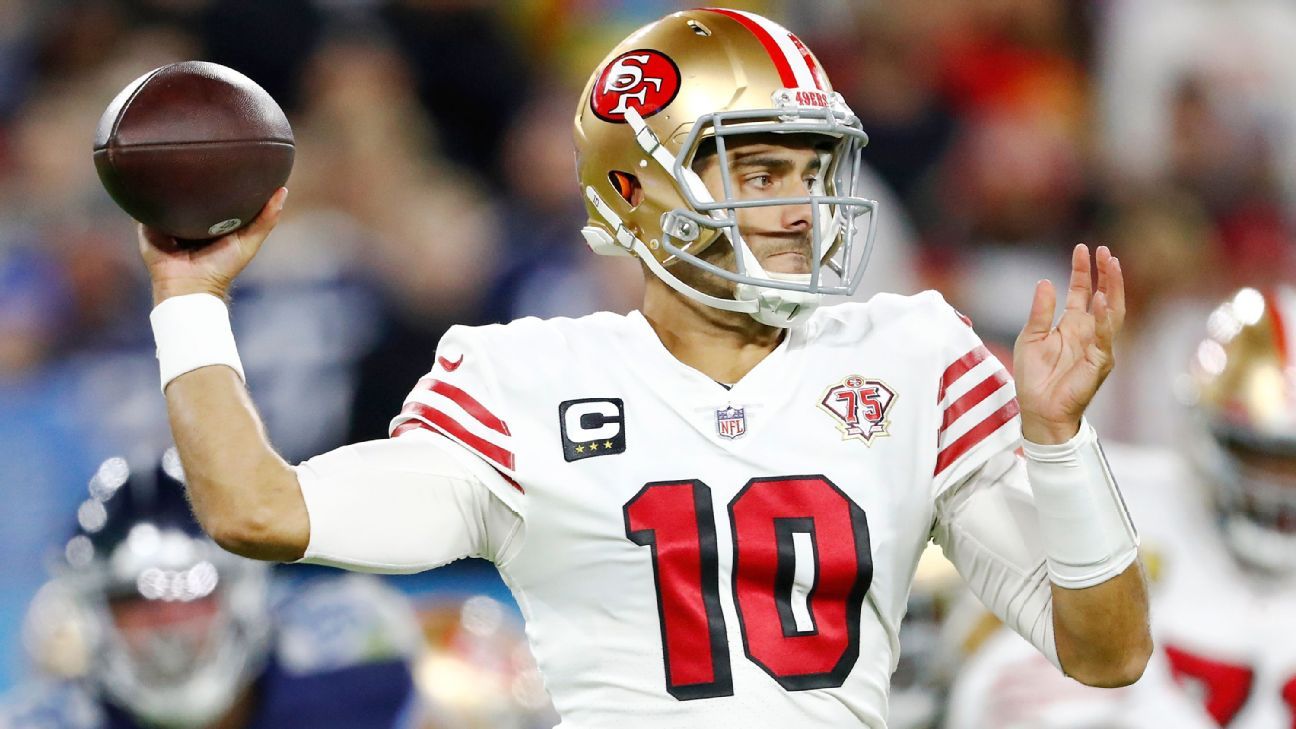 Now, Garoppolo’s status for Sunday’s game against the Houston Texans is uncertain.

“It’s a thumb sprain, so I think you guys know how those are,” coach Kyle Shanahan said. “It didn’t feel great today, wasn’t able to throw today and we’ll see how it is on Wednesday. Hopefully it will get better.”

Garoppolo did not participate in the Niners’ Monday “bonus” practice, which came after the team went its separate ways for the past three days following the loss in Nashville. Rookie quarterback Trey Lance took all of the work with the starters in Monday’s session, which Shanahan described as a walkthrough.

According to Shanahan, Garoppolo suffered the injury when Titans defensive tackle Denico Autry sacked him for a 7-yard loss with 3:56 left in the second quarter. Garoppolo finished the game but struggled with a pair of costly interceptions and missed a would-be touchdown throw to open fullback Kyle Juszczyk in the first half.

Shanahan indicated that Garoppolo was hampered by the thumb on the Niners’ first offensive play of the third quarter, a pass intended for receiver Deebo Samuel that sailed into the waiting arms of Titans safety Amani Hooker for an interception that Tennessee turned into the game-tying touchdown.

“We knew his thumb was hurting him,” Shanahan said. “We thought he jammed it sometime in the game, so he tells us right when he comes to the bench.”

With Garoppolo considered day-to-day, Lance could be in line for his first extended work with the starters since before a Week 5 loss to Arizona. And if Garoppolo is unable to heal well enough to play Sunday, Lance would make his second career start against Houston.

Shanahan indicated the decision will come down to not only how Garoppolo feels but also how he looks throwing the ball if he progresses to that stage. As for Lance, Shanahan said the No. 3 overall pick in this year’s draft has made good progress while running the scout team, pointing to improved decision-making and accuracy, among other things.

In addition to Garoppolo, the 49ers had some other key names dealing with injuries. Linebacker Azeez Al-Shaair has a sprained knee that will keep him out at least the next two games, according to Shanahan, while defensive tackle D.J. Jones will be limited by an ankle injury.

Finally, punter Mitch Wishnowsky is being placed on the reserve/COVID-19 list, making him the first Niner to get that designation since August.