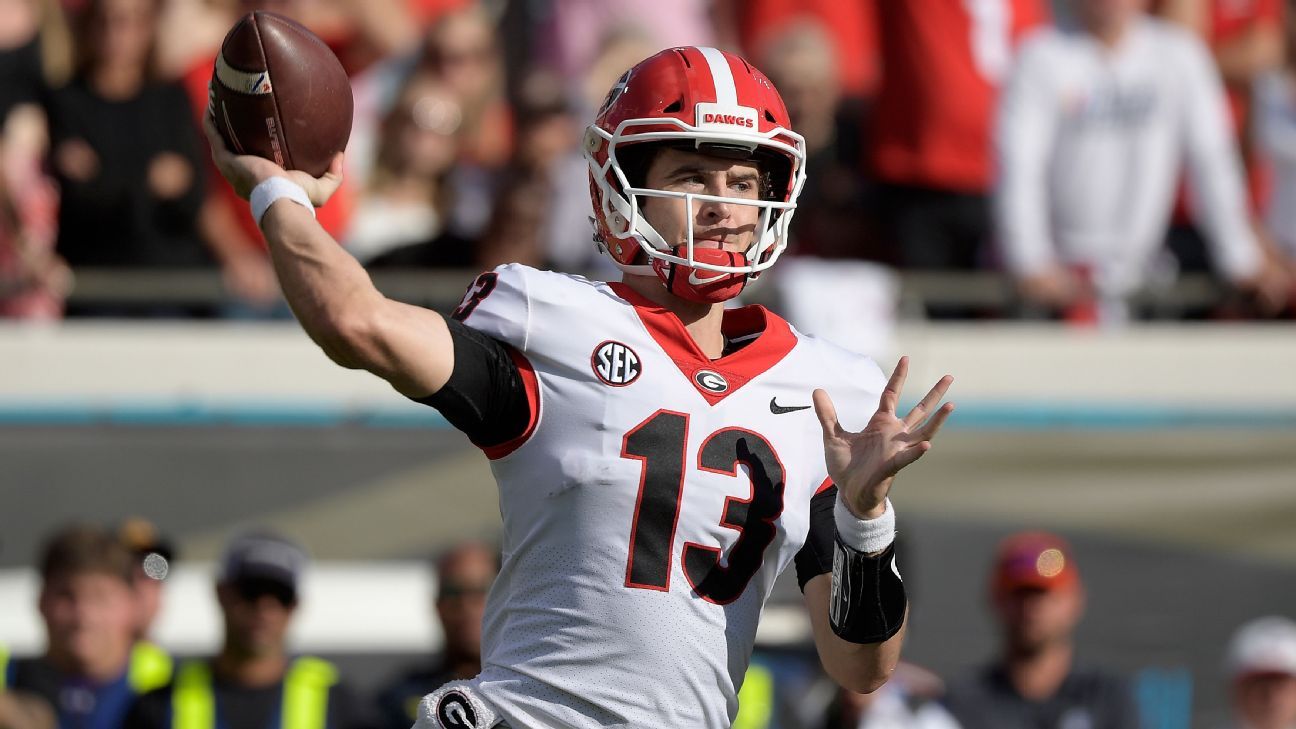 Georgia quarterback Stetson Bennett said he hasn’t spent a moment thinking about his job security as he prepares to face Michigan in the Capital One Orange Bowl on Friday. In fact, he said, he’s barely aware of the debate.

“I don’t have social media, so I don’t wallow in it,” Bennett said Tuesday. “I don’t sit in it. I don’t think about it. All I’m thinking about is beating Michigan.”

Bulldogs offensive coordinator Todd Monken gave Bennett his full support Tuesday, too, saying the former walk-on gives Georgia its best shot to beat Michigan. Monken also confirmed Bennett will have another key contributor on offense for the College Football Playoff semifinal, as receiver George Pickens is expected to play after missing a week of bowl practice earlier this month.

Bennett opened the season as the backup quarterback for the Bulldogs, but he saw action in Week 2 with former five-star recruit JT Daniels injured, and he threw for five touchdowns in the process. By early October, Bennett was again the starter, leading the Bulldogs to a 12-0 regular season and a No. 1 ranking entering the SEC championship game.

Still, debate persisted about whether Bennett, a former walk-on, was good enough to take the Bulldogs to a national championship, and after Alabama trounced UGA to win the SEC, the discussion got louder. Bennett said he doesn’t let the doubters affect him.

“I wouldn’t listen to myself if I was giving a speech on heart surgery,” Bennett said. “So why would I listen to somebody who doesn’t do this for a living and just watches it happen? It really doesn’t bother me.”

Daniels has played sparingly since a Week 4 injury that saw him depart the Vanderbilt game. From there, Bennett seized control of the job, Monken said, and never looked back.

“It wasn’t really anything JT did, it was more along the lines of what Stetson did that we thought gave us the best chance to win,” Monken said. “His mobility in the run game and the pass game when things break down, we believe give us the best chance to win. It just happened where Stetson got an opportunity, took advantage of that opportunity, we continued to win. It never really ended up flipping the other way.”

Bennett’s mobility — he has 251 yards rushing this season, including 141 on scrambles — is likely a necessary weapon in the Orange Bowl, with Michigan’s defense featuring two of the country’s top pass-rushers in David Ojabo and Aidan Hutchinson.

Monken acknowledged that the debate largely surrounds the recruiting of both quarterbacks, and said he’s bought in at times, too.

“I think Stetson at times, [I] have probably undervalued his skill set,” Monken said. “We’ve tried to elevate guys that have talent on our roster, and we do that at every position, and some guys just combat that and fight and scratch and continue to play well and try to prove you wrong, and that’s what Stetson Bennett did.”

As for Pickens, injuries limited him to just two games and three receptions this season. Pickens suffered an ACL injury in the spring, but he returned to action in the regular-season finale against Georgia Tech and had two receptions against Alabama.

In last year’s Peach Bowl, Pickens had one of his best games, catching seven passes for 135 yards and a touchdown in a win over Cincinnati.

“There are going to be some things that he’s continued to work through, trusting the knee, obviously reps,” Monken said. “We’re still trying to work him in and to make sure that he can help us offensively and most importantly help us win with what he can do at this point.”