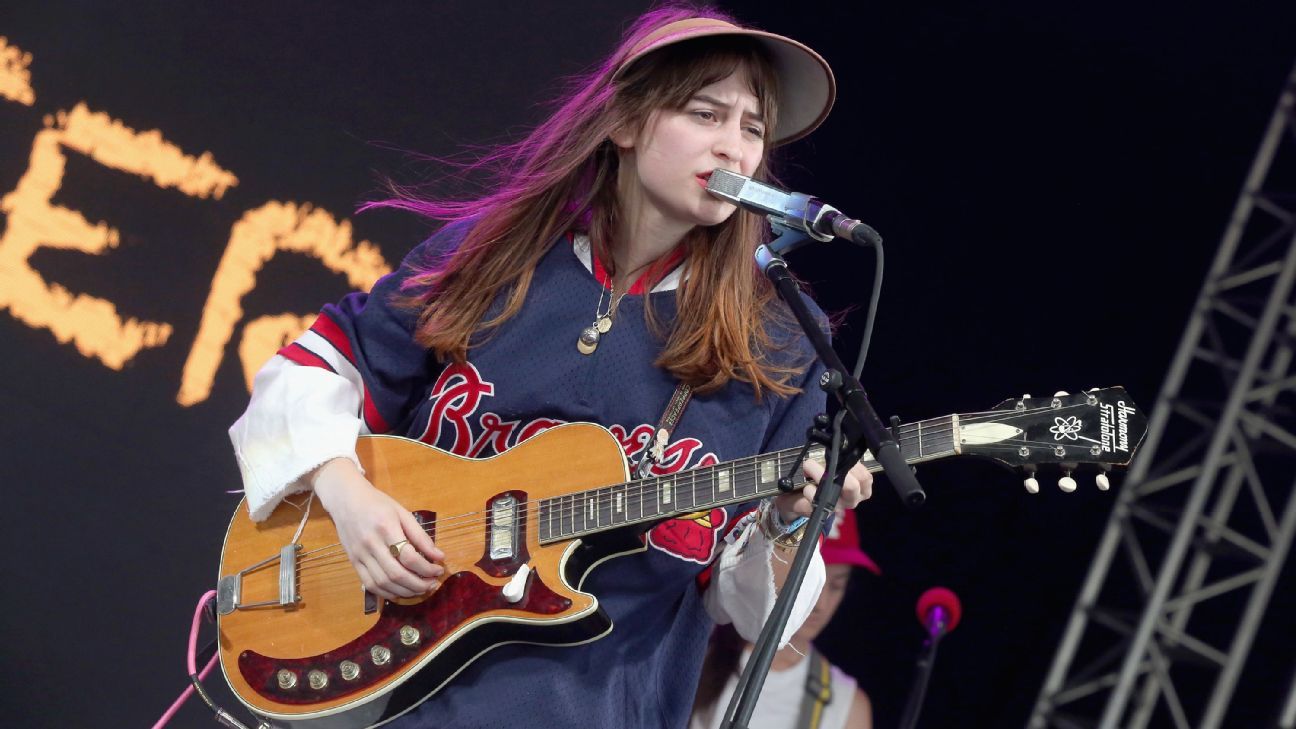 While off the road from touring her 2019 album Atlanta Millionaires Club, Webster — a native of Atlanta — found herself with a lot of free time. She spent much of it watching the Braves. On some nights she would stream the games on Hulu Plus, to which she subscribed just to watch her favorite team. When she felt more nostalgic, she turned on the radio and listened to the broadcasts, something she had done frequently growing up. Webster quickly began to take notice of Acuña Jr., then a rising superstar, who sparked her creativity.

“It wasn’t like I wanted to write a song about baseball,” Webster told ESPN in July. “It was like I’m writing about this because this is all I’ve done this year. It just consumed my life, the Braves.”

A distant crush developed. She had made-up conversations in her head with Acuña, and began wearing his team’s jersey on a daily basis. She felt compelled to put her thoughts about Acuña on paper, which eventually turned into the song “A Dream With a Baseball Player” — a single off her critically acclaimed record I Know I’m Funny haha, which the music site Pitchfork recently named the 11th best album of 2021.

“I could just meet him and get it over / Or I’ll just keep wearing his name on my shirt / Whatever I need just to help me cope,” Webster sings. “How did I fall in love with someone / I don’t know?”


After she first released the song — as a single in 2019 — the Braves invited her to sing “Take Me Out to the Ballgame” during the seventh-inning stretch. Webster grew up going to Braves games with her dad and family. She felt nervous while on the field at Truist Park for batting practice before her performance, googling the lyrics to the baseball anthem and reading them, over and over again.

“It’s like, you know the lyrics, what am I doing?” Webster said.

A Braves employee told her she could meet the subject of her song, and Webster and Acuña began chatting through a translator. She did not mention the song she wrote about him — in fact, she assumed he hadn’t even heard it.

“I said nothing to this person about who I was or anything,” Webster said.

Before the two parted ways, Acuña had something to say.

“Thank you for the music,” he said.

“What does that even mean?” Webster said, recalling the meeting with Acuña. “Who told you something? It was not me. I don’t know what they told you. I don’t know. It was nice.”

In elementary school, Webster would at times leave school early to go to games at the old Turner Field. Chipper Jones, Craig Kimbrel and Marcus Giles ranked among Webster’s favorite players growing up.

Her love for baseball has popped up in her lyrics before. In the song “It Doesn’t Work Like That” off her 2017 self-titled album, she wrote about the effects of the trade of Kimbrel from Atlanta to the San Diego Padres.

“The pitcher of the baseball team / Traded in his jersey / Doesn’t want to leave,” Webster sings. “I guess it doesn’t work like that.”

Because the 2021 World Series champions — of which Acuña was an integral member, though his season ended early with an ACL tear — have occupied such a large part of her life, Webster frequently finds herself thinking about the team and how their ups and downs affect her emotional state as a person and as an artist.

“I feel like what I relate to the most [in music] is the personal s—,” Webster said. “The lyrics that are really honest and personal and there’s almost no privacy barrier. You just know me if you listened to my music because I’m being so out there and I feel like that was Acuña and [Braves second baseman] Ozzie [Albies]. Even just following both of them on Instagram for so long, I literally felt like they were my friends.”

That personal songwriting continues to garner attention, with Webster’s song “Better Distractions” ending up on former president Barack Obama’s annual year-end playlist in 2020 and dates to open for HAIM on their 2022 tour. While she’s spent a lot of time promoting her music, being interviewed about her favorite baseball team was a bit of a curveball.

“Nobody planned me talking to ESPN,” Webster said. “It’s kind of refreshing. I’ve been answering the same questions for three months in a row about the songwriting process and what inspired the album. It’s never been, ‘OK, tell me why you like the Braves.’ That’s nice.”

Which Canucks and Islanders benefit from the Bo Horvat trade?
Pedri stars in 100th appearance and rescues Barcelona once again in scrappy win vs. Girona
Guardiola feels the strain as Arsenal, Man United reawaken with his own proteges
How Blagoy Ivanov cheated death to become a UFC contender
Ex-Minn. players’ discrimination lawsuit dismissed