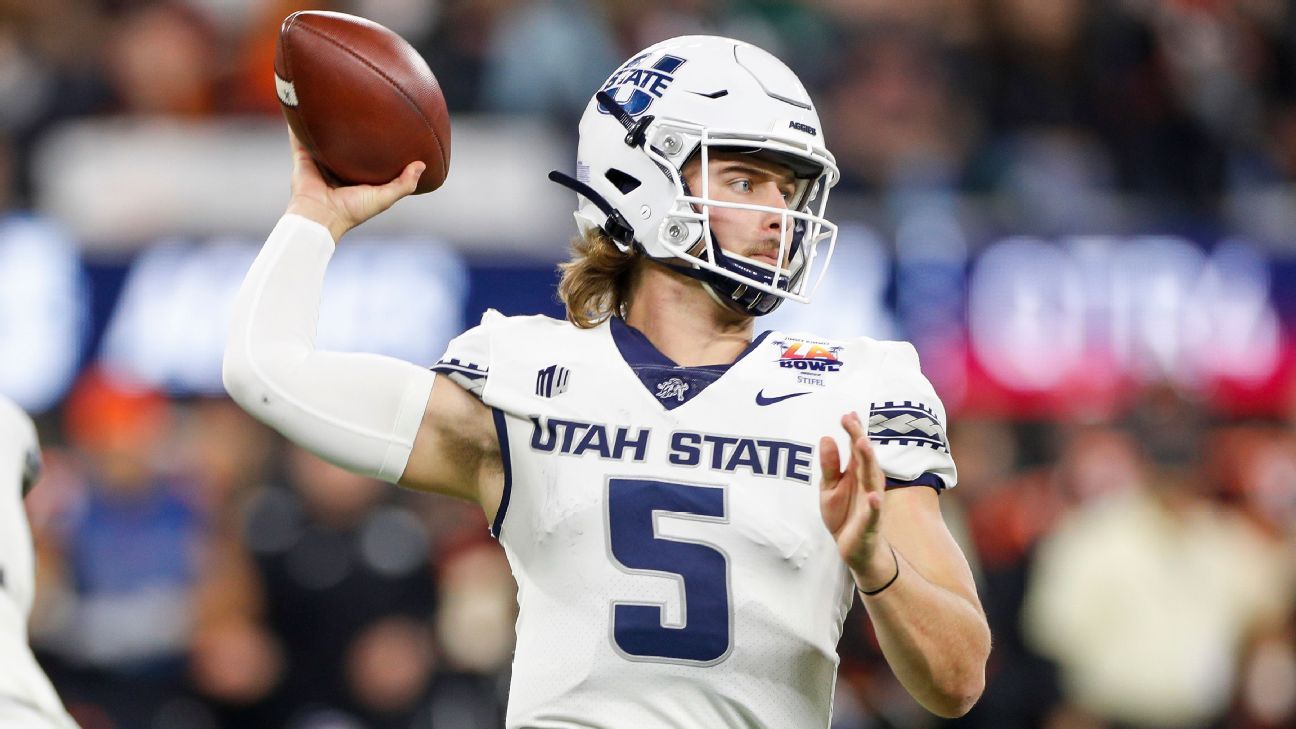 We’ve made it to the bowl season of the 2021 college football campaign, and we’re keeping track of each and every one of the games over the final weeks of the year. From breakout players, to notable performances and so much more, our reporters break down everything you need to know from all the 2021 bowl games.

The Myrtle Beach Bowl started with a bang when Old Dominion’s LaMareon James ran the opening kickoff back 100 yards for a touchdown. It was the first return for a score on the opening kickoff for an Old Dominion player, and it was also the first time a bowl game started with a kick return for a touchdown since the 2017 Military Bowl. That was the only touchdown scored by Old Dominion until the fourth quarter, though, and Tulsa was able to come out on top. Tulsa quarterback Davis Brin took over the game and threw for 285 yards and two touchdowns. Tulsa finishes the season at 7-6, but the team won its last four games, including a win over SMU. The overall record isn’t what the Golden Hurricane were hoping for, but they can use the final games of the season as a catapult into next season.

No Billy Napier, no problem. As Louisiana-Lafayette’s former head coach signed a recruiting class at Florida, the Ragin Cajuns polished off a near-perfect 13-1 season by holding off Marshall 36-21 in New Orleans. New coach Michael Desormeaux could barely hold back his smile after turning his first game as head coach into the Cajuns’ 13 straight win — it’s their best season in program history. Desormeaux, who played at ULL from 2005 to ’08 and has been coaching there since 2016, was chosen as Napier’s successor earlier this month. The 36-year-old’s rise has been rapid. He was named the Ragin Cajuns’ co-offensive coordinator in 2021 and is now set to carry the program’s success under Napier forward. In Saturday’s game, his team put up nearly 500 yards of offense and made zero turnovers to the Herd’s two. It was the difference.

Of all the job changes in the coaching carousel this season, Napier’s departure from Lafayette seemed the most amicable. It was a testament to how mutually beneficial the relationship had been. Now, the school is hoping it can replicate those good vibes with Desormeaux. So far, so good. — Paolo Uggetti

Utah State gets help from their backup quarterback as they take down Oregon State 24-13 in the inaugural Jimmy Kimmel LA Bowl.

In a game that featured a pair of teams that took significant steps forward this season, Utah State polished off an incredible first season under coach Blake Anderson. A year ago, the Aggies saw coach Gary Andersen depart after just three games in the second season of his second tenure and finished the season 1-5. It was a low moment for the program, which had built a lot of momentum before Matt Wells left for Texas Tech after the 2018 season — a season in which the Aggies finished ranked No. 22 in the AP poll. That was just the third time Utah State had ever finished in the AP Top 25 and this year will almost certainly be the fourth. The Aggies, who won the Mountain West, led the receiving votes category in the final poll of the regular season and figure to move up after a convincing 24-13 win against Oregon State. After the Beavers scored a touchdown on a three-play, 71-yard opening drive, Utah State kept them out of the end zone the rest of the game. — Kyle Bonagura

Malik Willis didn’t want to go out on the heels of three straight losses and was committed to hanging around for Liberty’s bowl game. It was a good thing for him and a good thing for the Flames, as they looked a lot like the team that won 10 games a year ago on Saturday night in a 56-20 pummeling of Eastern Michigan. Willis showcased the kind of arm strength, athleticism and escaping ability that make him a projected first-round pick at quarterback in the upcoming NFL draft. Willis accounted for five touchdowns in a little more than three quarters of work, and the Flames picked up their eighth win of the season. Liberty coach Hugh Freeze, who received an extension and raise last month that makes him one of the highest-paid Group of 5 coaches, has guided the Flames to bowl wins in each of his three seasons. Liberty has won 26 games under Freeze since moving to the FBS ranks and is set to join Conference USA for the 2023 season. — Chris Low

Never mind the steady rain in Shreveport, Louisiana. This matchup was never going to be about the passing game anyway. Not when it featured two of the most productive running backs in college football: UAB’s DeWayne McBride, who entered the weekend ranked 20th in the FBS in rushing yards with 1,188, and BYU’s Tyler Allgeier, who was tied for the most rushing touchdowns in the FBS with 20. And those two backs didn’t disappoint. Allgeier was an absolute force, running for 192 yards and three touchdowns. But it was McBride who got the best of the battle, carrying UAB to a 31-28 win with a career-high 28 carries that went for 183 yards and a touchdown. — Alex Scarborough

A week and a half ago, Fresno State star quarterback Jake Haener was still in the transfer portal. After head coach Kalen DeBoer and offensive coordinator Ryan Grubb left for Washington, Haener thought he needed to explore his options. But not only did Haener have a change of heart and withdraw his name from the portal, he was able to come back and start against UTEP, completing 26 of 41 passes for 286 yards and a touchdown in the 31-24 win. Make sure to give the Bulldogs’ defense credit as well, though. After giving up 17 points in the first quarter and a half, they surrendered only 7 the rest of the way. Safety Levelle Bailey, who was injured in the third quarter and had to be helped off the field, came back and got a key fumble recovery to ice the game with less than 4 minutes remaining. — Scarborough

Deion Sanders’ big week came to a screeching halt in the Celebration Bowl, as his Jackson State team was crushed by South Carolina State 31-10.

Sanders dominated the headlines earlier in the week after flipping superstar recruit Travis Hunter on national signing day, a first-of-its-kind grab for an FCS program and part of the highest-ranked signing class in FCS history. But the 11-win Tigers ran into a brick wall in the South Carolina State defense, which picked off QB Shedeur Sanders twice — turning both into touchdowns — and finished with three takeaways, while holding Jackson State to less than 200 yards of offense, including just 18 on the ground.

Bulldogs QB Corey Fields Jr. completed just 12 passes in the game, but four of them went for touchdowns.

The loss for Jackson State was its first against an FCS team this season — the Tigers’ lone defeat came to FBS Louisiana-Monroe by 5 points — and was the biggest margin of defeat in Deion Sanders’ two seasons as coach. — David M. Hale

A year ago, Bailey Zappe played four games, part of FCS Houston Baptist’s abridged COVID-19 campaign. After Saturday’s RoofClaim.com Boca Raton Bowl, Zappe is now the FBS single-season record holder for both touchdown passes and passing yardage. It has been a heck of a ride.

Zappe transferred to Western Kentucky last offseason — following HBU offensive coordinator Zach Kittley to the Hilltoppers — and blossomed into college football’s most prolific passer. He tossed four touchdowns in the first half against Appalachian State, tying Joe Burrow’s record of 60 passing touchdowns in a season, and added two more to set the mark in the second half. While Zappe was picking apart the Mountaineers’ secondary (they allowed just 12 passing TDs all year), the Hilltoppers’ ground game had its best game of the season, too, with Noah Whittington and Kye Robichaux both finding the end zone in the 59-38 win.

Zappe figures to become a midround NFL pick — and a possible steal for some team — but his one season playing FBS football will live on in the record books. Meanwhile, Kittley is set to move on to Texas Tech as the new OC, and Saturday’s fireworks certainly give Red Raiders fans something to be excited for in 2022. — Hale

Toledo was 0-4 in one-score games in the regular season, so it made sense that the Rockets would end the season with one more tight loss. Middle Tennessee went on a 17-0 fourth-quarter run to take an insurmountable lead, eventually prevailing 31-24. MTSU freshman quarterback Nick Vattiato had a lovely outing, throwing for 270 yards and two touchdowns, including a 59-yard bomb to Jarrin Pierce. But the biggest difference-maker was third downs: The Blue Raiders were 7-for-16 on third downs, while Toledo was just 1-for-12 until converting three on its final drive. The Rockets made plenty of explosive plays, but MTSU was able to play keepaway, snapping the ball 85 times and taking late advantage of an increasingly weary Toledo defense. — Bill Connelly

Jarrin Pierce makes a sensational catch as Middle Tennessee State marches down the field before Frank Peasant runs in for a touchdown.

Coastal Carolina quarterback Grayson McCall was set up for success coming into this game, with Northern Illinois’ defense 118th in FBS in points allowed. The sophomore quarterback didn’t disappoint, throwing for 315 yards and four touchdowns in a 47-41 victory that came down to the last play for the Huskies.

Northern Illinois running back Jay Ducker, who came on strong in October for the Huskies, was their breakout performer with 146 yards rushing on 24 carries. Despite the close loss, it was a great season for NIU, which finished the 2020 season 0-6.

The Cure Bowl was the Chanticleers’ second one in as many years, but this time, they were able to secure their first bowl win in school history. — Harry Lyles Jr.

Giants’ Love: Sirianni has ‘free ride’ as Eagles HC
‘This is the happiest time for me’: Inside Fedor Emelianenko’s last hurrah in MMA
Scotland name experienced team to face England
Formula 1: Ford to return after 22 years out of sport
Refs’ union: Missed LeBron call ‘gut-wrenching’