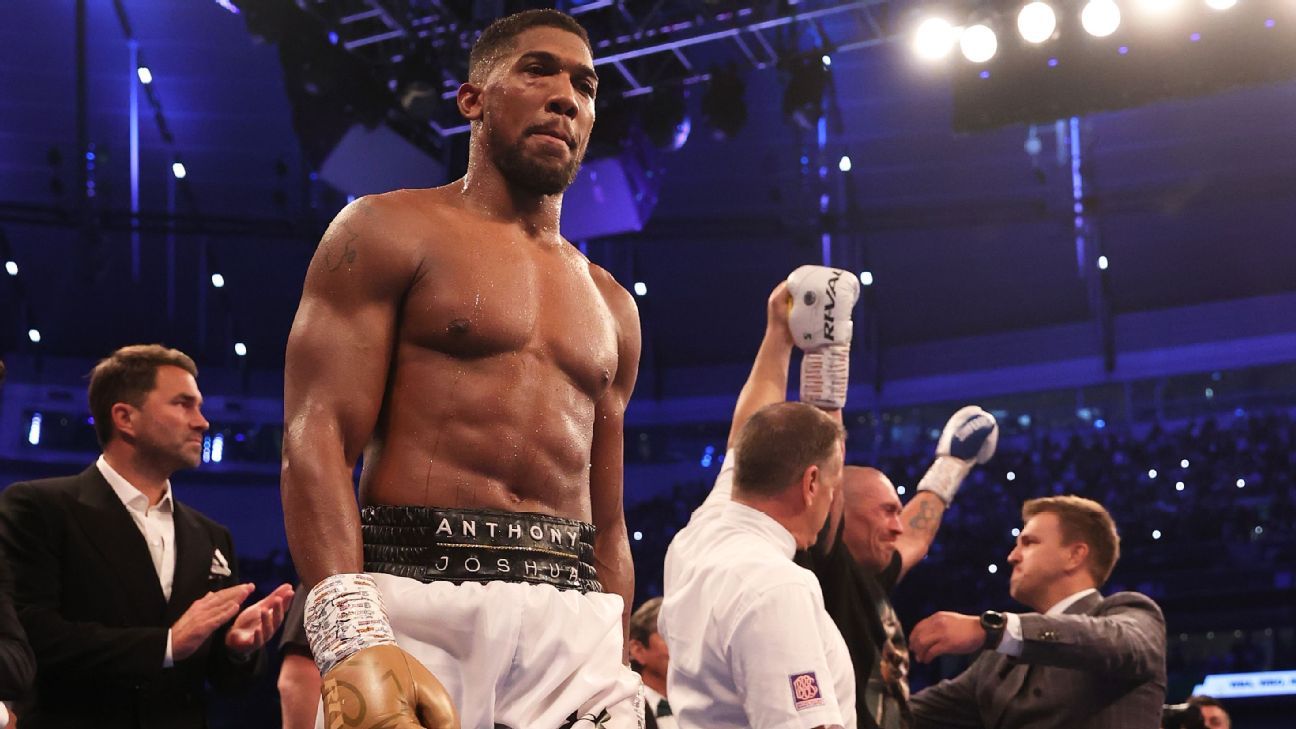 In boxing, 2021 was a year that produced unexpected breakthrough performances from fighters such as Oleksandr Usyk and George Kambosos Jr. But those victories came at the cost of established stars who were seemingly poised to lock down perennial spots among boxing’s pound-for-pound best.

Usyk’s upset victory to capture the unified heavyweight championship, which established the former cruiserweight champ as a force to be reckoned with in boxing’s most history-laden division, came at the expense of Anthony Joshua, who was left to look to bounce back from a crushing loss for the second time in his career.

Kambosos shocked the world when he won all of Teofimo Lopez’s lightweight world titles in December. After the fight, it was revealed Lopez was far from 100% entering the bout, but that means little in terms of the post-loss fallout.

Joshua and Lopez will be on the comeback trail in 2022, and they won’t be alone in their quest to rebound in the new year. Some boxers will rediscover the form that lifted them to the pinnacle of the sport, while others will fail to regain the status they once enjoyed.

As we head into 2022, these seven boxers stand out with the potential for a major rebound after disappointments or inactivity in 2021. Let’s take a look at how likely they are to turn things around.

The 32-year-old from England, a two-time former unified world champion, finds himself in familiar territory. Joshua was on top of the sport when he was upset by Andy Ruiz Jr. in June 2019 via seventh-round KO. Six months later, he turned the tables with a convincing decision win in Saudi Arabia to reclaim his three world titles.

Joshua fought only once in 2020, recording a ninth-round knockout of Kubrat Pulev that December. Then Joshua was lined up for a mandatory title defense against Usyk, the former undisputed cruiserweight champion. And while Joshua wasn’t knocked out this time around, his August decision loss to Usyk revealed that Joshua’s chin remains shaky, among other flaws. Usyk, the far smaller man, appeared on the brink of the finish in the closing seconds of a surprisingly one-sided fight.

And, just like he did against Ruiz, Joshua quickly triggered his right to an immediate rematch. That encore encounter with Usyk is slated for springtime.

How likely is it that Joshua pulls off a bounce-back similar to what he did following his first pro loss? It’s difficult to envision how Joshua exacts revenge against an even better, more polished foe. There was nothing fluky about this loss, as Usyk boxed circles around Joshua. The Ukrainian turned Joshua time and again and consistently beat him to the punch.

So how does Joshua intend to change the script? Ahead of the return bout, he is expected to find a new trainer to replace Rob McCracken as the lead voice in his corner. Joshua checked out several stateside gyms during a whirlwind tour, and promoter Eddie Hearn told ESPN that Joshua will indeed train in the United States for the rematch.

Among the trainers Joshua spent time with were Robert Garcia, Eddy Reynoso, Virgil Hunter and Ronnie Shields. Whomever Joshua links up with, there’s a lot of work to be done in a short amount of time if he hopes to turn the tables on Usyk.

Lopez crashed through the glass ceiling with an October 2020 upset win over Vasiliy Lomachenko. But the celebration was short-lived.

What appeared to be a routine title defense against Kambosos transformed into something far more chaotic due to the saga that surrounded the bout. Lopez was forced to withdraw from the originally scheduled June 19 date after he contracted COVID, leading to a prolonged struggle to rebook the fight.

Finally, the bout took place on Nov. 27. The fight was expected to result in an easy win for Lopez, but it played out completely differently. Kambosos floored Lopez in the opening round and survived a 10th-round knockdown to score a clear decision victory in one of the best action fights of 2021.

ESPN’s Mark Kriegel later reported that Lopez wasn’t fit to fight that night as he dealt with a serious medical issue that could’ve had catastrophic, life-threatening consequences because of his decision to step into the ring.

As far as his next trip into the ring, the 24-year-old will look to rebuild in a new weight class. Lopez has been open about his struggles to make 135 pounds and plans to fight at 140 going forward. He’s expected to return in a confidence-building bout at some point next year before pursuing a title in a second weight class.

Like Joshua, Lopez may need to make some changes in his corner. Missing on fight night was Joey Gamache, who was instrumental during Lopez’s training camp ahead of the Lomachenko fight.

The middleweight titleholder was slated to fight Ryota Murata on Dec. 29 in Japan in a unification bout, but plans were scrapped due to Japan’s restrictions on travel connected to the Omicron variant of COVID.

Once the hottest fighter in the sport with a record string of knockouts, Golovkin saw his momentum come to a screeching halt. The bout with Murata could be rescheduled for February, sources said, and assuming GGG wins, he’ll need two more fights next year to recapture the magic.

He turns 40 in April, and the prospect of an anticipated third fight with Canelo Alvarez is slipping away. GGG’s last fight was a December 2020 stoppage victory over fringe contender Kamil Szeremeta, his only action since an October 2019 slugfest win over Sergiy Derevyanchenko.

If GGG indeed has one more stretch run left in him, the plan appears clear: knock out Murata and chase the undisputed title at 168 pounds with a trilogy bout against his arch nemesis. If the Canelo fight can’t be realized, then Golovkin will need to score a win over either Jermall Charlo or Demetrius Andrade to prove he’s still a top-level fighter.

Unlike some of the other names on this list, Wilder is actually coming off a performance that improved his standing in the sport.

Sure, he was savagely knocked out by Tyson Fury in the conclusive ending to their trilogy, but the bout was an instant classic. Most importantly, Wilder performed far better than expected after getting blown out in the second fight of the trilogy.

After he was floored in Round 3, Wilder stormed back to score two knockdowns of Fury in a heavyweight title tilt for the ages. Wilder displayed admirable courage and never wilted despite absorbing one of the worst beatings in recent memory.

When Wilder said he would rather die in the ring than have the towel thrown in, he clearly meant it. He hung tough until the brutal end when Fury finally knocked him out in Round 11.

Wilder recently said he’s unsure if he wishes to continue fighting. But if he does step back into the ring, the 36-year-old deserves a softer touch in his comeback bout. And he won’t need a new trainer this time around, as the switch to former opponent Malik Scott paid big dividends as Wilder boxed more wisely.

Even if Joshua loses once more to Usyk, a fight between AJ and Wilder remains one of the biggest potential attractions in all of boxing. Similarly, a Wilder-Ruiz matchup would be electrifying and is ostensibly easy enough to put together, with both men aligned with PBC.

Thurman was considered one of the elite fighters in the sport when he was narrowly defeated by Manny Pacquiao in July 2019. Somehow, he hasn’t boxed a single round since then.

At long last, Thurman will end the hiatus with a Feb. 5 fight against Mario Barrios. He’s just 33 years old, so if Thurman can impress, the former welterweight champion will find himself squarely in the mix in one of boxing’s most stacked divisions.

Then again, Thurman struggled against Josesito Lopez in January 2019 following another long layoff, and this time, he’ll be fighting for the first time in 31 months.

Barrios will be jumping up to 147 pounds after suffering a TKO loss to Gervonta Davis at 140 pounds in June. With a KO of Barrios, all the big fights will be waiting for Thurman. Suddenly, a matchup pitting Thurman against Terence Crawford would be attractive. So, too, would fights against Errol Spence Jr., Yordenis Ugas, Vergil Ortiz Jr. and Jaron Ennis.

Thurman’s injury issues with his elbows and hands are well-documented, so perhaps the long rest will do him well.

The rising star kicked off the year with a bang, in a seventh-round TKO of Luke Campbell on Jan. 2. It was an impressive result in his first fight against world-class competition.

Garcia was unable to capitalize, though. A planned July bout against Javier Fortuna was cancelled while Garcia dealt with mental health issues. He was set to return against Joseph Diaz Jr. in November, but a wrist injury suffered in training required surgery and scuttled the fight.

Now recovered, Garcia said on ESPN’s State of Boxing that he’s looking to set up a fight with Isaac Cruz, who gave Gervonta Davis all he could handle. If it materializes, and Garcia looks like he did before his hiatus, the bout could be a prelude to a meeting with Davis.

The matchup of Garcia and Davis, two 135-pound stars, is another marquee, attention-grabbing matchup for boxing and would go a long way toward providing some clarity in one of the sport’s most talent-laden divisions. But first, Garcia needs to actually book a fight. Only then can the 23-year-old remind the public that he shouldn’t be forgotten when the best fighters in the lightweight division are being discussed.

Josh Taylor scored two knockdowns of Ramirez to capture the undisputed junior welterweight championship in May. Ramirez had his moments early in the fight, but all the same, he finds himself a contender rather than a champion for the first time in years.

The hard-nosed fighter had previously escaped with his unified 140-pound championship in close-decision wins over Jose Zepeda and Viktor Postol. But against Taylor, his stiffest test yet, Ramirez couldn’t pull it out.

Ramirez returns on Feb. 5 against Jose Pedraza, a tricky boxer who figures to present problems for Ramirez. If the 29-year-old can lift himself past Pedraza, he’ll be in line for a title shot again. That could come against Taylor, who will make his first defense of the undisputed championship on Feb. 22 against Jack Catterall. Or it could come in a vacant title fight, if Taylor decides to jump up to welterweight for a fight against Terence Crawford.

Whatever happens next, Ramirez figures to be a better, more complete fighter after enduring 12 rounds with the best opponent of his career. He proved a knockdown couldn’t deter him during the loss. Now Ramirez will have to start his comeback without the benefit of a tune-up bout.