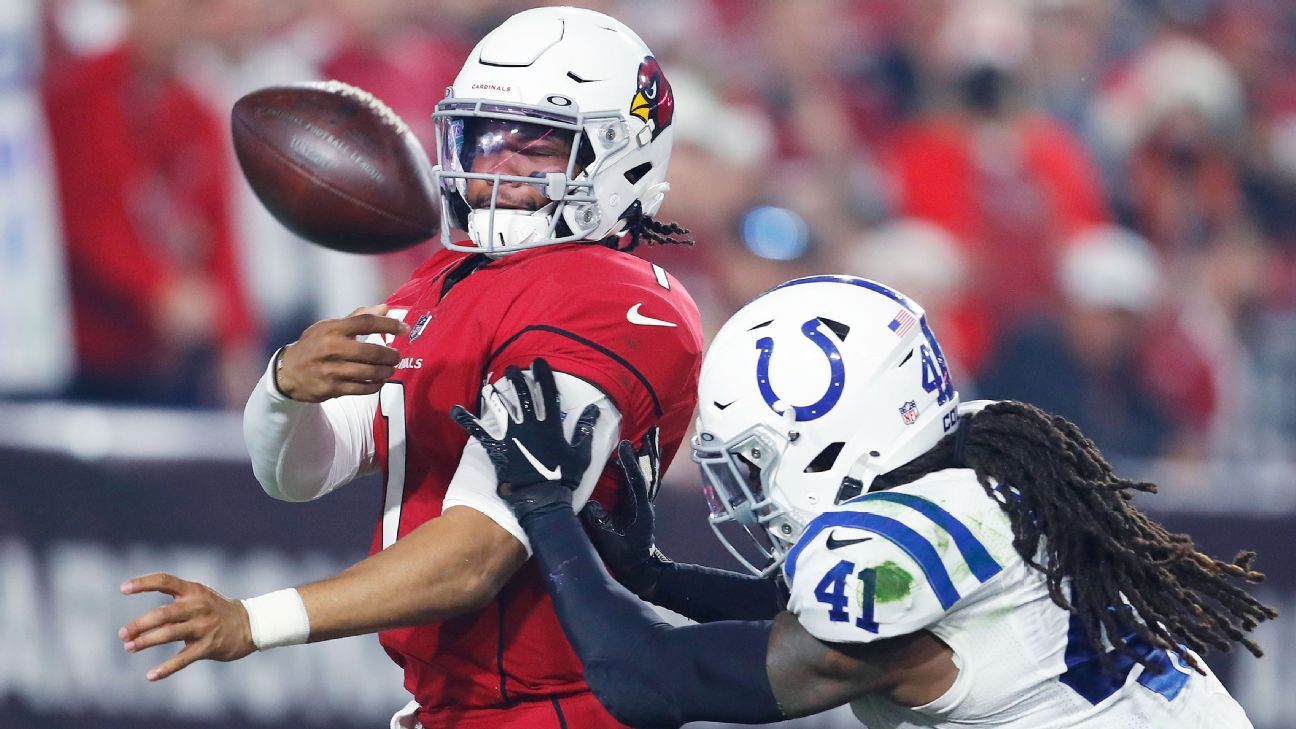 GLENDALE, Ariz. — Despite being on the verge of potentially clinching a playoff spot Sunday, frustration began boiling over for the Arizona Cardinals after Saturday night’s 22-16 loss to the Indianapolis Colts.

A series of penalties and missed kicks led to the Cardinals’ third-straight loss and fifth in their last eight games.

“We feel it, you see it,” quarterback Kyler Murray said. “It’s just good teams don’t do that and we weren’t doing that early on in the season, and now you see, it’s killing us in crucial moments where we’re just not scoring touchdowns because of it, or vice versa, on the other side of the ball.

“As a collective group, offensively and defensively, like it’s just mental mistakes that you just can’t keep making if we want to win these games that we know we’re supposed to be winning. I mean, it’s bad football.”

Yet, they’re still in position to clinch a playoff berth Sunday if either of the New Orleans Saints, Philadelphia Eagles or Minnesota Vikings lose. It’ll be Arizona’s first playoff berth since 2015, when they lost in the NFC championship game to the Carolina Panthers.

But Murray says he doesn’t want to be playing the type of football Arizona has been lately heading into the postseason.

“All you gotta do is get in,” he said. “That’s all you got to do. But, at the end of the day, we don’t want to get in playing the way we’re playing. We want to go in playing and feeling good about ourselves and what we’re doing. The thing about it is it’s fixable.

“We just got to look ourselves in the mirror, stop making these mistakes because that game was very winnable. But good teams don’t do that and right now we’re not doing what we need to do.”

Coach Kliff Kingsbury said the Cardinals “continue to find ways to lose critical situations and penalties and things of that nature.” He added that, “we got to get it turned around somewhere.”

Arizona, which started the season 7-0, has two games left. They’re at the Dallas Cowboys a week from Sunday and finish the regular season at home against the Seattle Seahawks. After Saturday night’s game, the Cardinals dropped to fifth in the NFC standings and out of the lead in the NFC West.

That could all change again if the Los Angeles Rams, which claimed the top spot in the West after Arizona’s loss, lose to the Vikings on Sunday.

One way for the Cardinals to get back to their winning ways, Kingsbury said, was for them to “focus on their job.”

“I think with some of the guys out, guys are trying to do too much at times and we got to just take it one play at a time, do your job, reset and do it again,” he said.

Running back Chase Edmonds said Arizona needs to “ignore the noise” that will come with a third-straight loss. “We don’t need that right now,” he said. “We can’t afford that right now.”