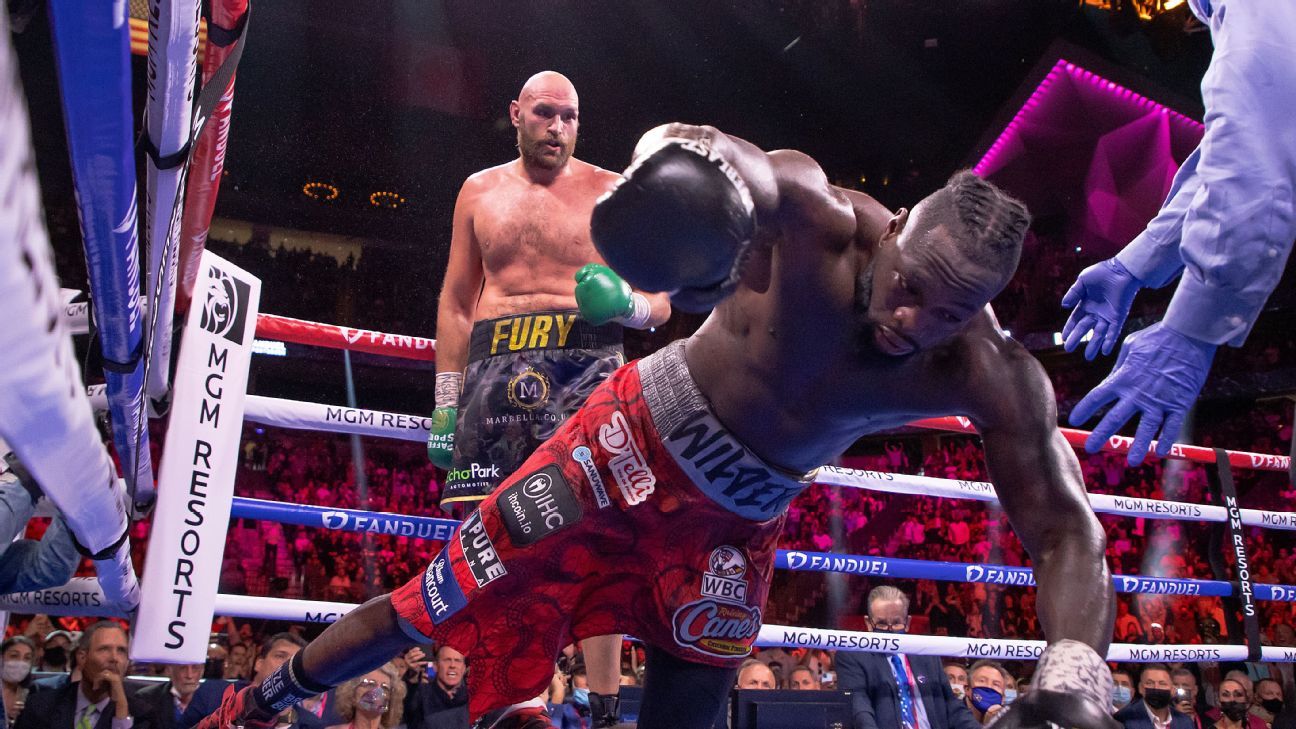 The boxing industry came to a screeching halt in 2020. Without the possibility of capacity crowds, the biggest fights were tossed to the side, along with the millions in gate revenue that would have accompanied them.

But beginning in May with Canelo Alvarez’s victory over Billy Joe Saunders in Arlington, Texas, a fight that broke the indoor attendance record in the U.S. with 73,126 fans, the boxing business returned to normalcy. Gone were the “bubbles,” replaced by lively crowds spanning the world.

The year finished strong with a string of marquee fights in the fourth quarter that set the stage for big things to come in 2022. Tyson Fury’s epic third battle with Deontay Wilder. Alvarez’s third fight of the year, one in which he finally achieved undisputed status with a TKO over Caleb Plant.

And of course, we can’t forget social media sensation Jake Paul, who headlined on pay-per-view three times. Naturally, 2021 was also marked by the fights that weren’t made, which is nothing new in boxing.

Fury and Anthony Joshua were set to battle it out after years of failed negotiations. On Aug. 14 in Saudi Arabia, they’d meet in the richest heavyweight fight of all time.

That was before the arbitrator surprisingly ruled that Fury owed Wilder a third fight. No problem, right? Joshua would take care of his obligation to Oleksandr Usyk and Fury would end his rivalry with Wilder. Then A.J. and “The Gypsy King” could meet in 2022 for all four heavyweight titles.

Of course, the plan didn’t play out according to script. Usyk didn’t just upset Joshua when they met in August; he dismantled the heavyweight champion at the packed stadium in England. Two months later, Fury concluded the trilogy in brutal fashion with an 11th-round KO of Wilder in a heavyweight classic.

Joshua quickly exercised his right to an immediate rematch with Usyk, so if he can exact revenge in the spring, the collision course with Fury will once again be back on track. But that’s a tall order considering the fashion in which Usyk won.

Fury, meanwhile, is engaged in negotiations with mandatory challenger Dillian Whyte for a March tilt in the U.K. The biggest fight in the division might end up being Fury-Usyk for the undisputed championship.

Sure, Paul made waves in November 2020 when he turned Nate Robinson into a meme on the Mike Tyson-Roy Jones Jr. undercard. But 2021 will be marked as the year Paul proved he took boxing seriously.

The boxing novice headlined on pay-per-view for the first time with an April fight against former Bellator and ONE champion Ben Askren. Paul quickly dispensed with the wrestler with a first-round KO on Triller.

Paul parted ways with Triller afterward and signed a multifight deal with Showtime, a longtime player in the boxing industry. The network helped legitimize Paul with a commitment to pay-per-view events he headlined, coupled with world-class boxers on the undercard.

The maiden voyage with Showtime came in August, an eight-round decision win over former UFC champion Tyron Woodley in Cleveland. The win wasn’t conclusive, but Paul showed off improved boxing ability for a fighter learning on the job.

The 24-year-old was set to fight Tommy Fury, the half-brother of Tyson Fury, in December, but the Englishman withdrew after suffering a broken rib. In his place returned a familiar face, Woodley, in a bout made in less than 72 hours.

This time, Paul left no doubt with a spectacular KO of Woodley in Round 6. The late change in opponent robbed fans of the chance to finally see Paul compete with a legitimate boxer, but he’ll have plenty of time to face such a fighter in 2022.

Could Julio Cesar Chavez Jr. fit the bill? He looked lethargic in a decision loss to former UFC star Anderson Silva in June. Certainly, Chavez represents the kind of name recognition Paul seeks and, even at this stage, a leap in competition.

Another viable opponent: Silva. He’s proven to have decent boxing skills for an MMA fighter and makes plenty of sense as another Paul foe. Two fighters whom Paul called out, Nate Diaz and Jorge Masvidal, are longshots given that they’re both under contract with UFC.

Many fighters said goodbye to the sport in 2021. Shawn Porter following his loss to Terence Crawford. Luke Campbell after his TKO loss to Ryan Garcia.

None of those farewells will be felt as much as Manny Pacquiao’s retirement after a legendary career that spanned four decades.

The global superstar was one of the sport’s few household names, a man who was synonymous with boxing. Sure, he didn’t box often at this point; his last bout had been a July 2019 victory over Keith Thurman. But there was genuine anticipation surrounding Pacquiao’s scheduled fight with Errol Spence Jr.

After Spence suffered an injury it didn’t happen, and instead, Pacquiao fought Yordenis Ugas, who accepted the bout on 11 days’ notice. The fight was competitive, but Pacquiao, approaching his 43rd birthday, didn’t resemble the whirling dervish who tore through eight weight classes.

He announced his retirement in September with an emotional tribute video that closes the door on the superfights with Crawford and Spence that never materialized. Yes, Pacquiao has come out of retirement before, but this time is different.

Pacquiao is gearing up for a presidential run in the Philippines in May, and he clearly has nothing left to give the sport. He won titles in eight divisions and will be a first-ballot hall of famer.

The sport’s biggest star for some time has been Alvarez anyway, and Fury is ably filling the void behind him stateside.

With Pacquiao joining Floyd Mayweather in retirement, there is now more oxygen for boxing’s rising stars, all of whom are jockeying for position in the sport’s hierarchy.

A year for all the belts

Speaking of undisputed, 2021 will be remembered as the year we finally received some clarity in boxing’s 17 divisions.

Josh Taylor kicked off the festivities with an exhilarating decision victory over Jose Ramirez in May to capture the undisputed junior welterweight championship. George Kambosos Jr. finished the stretch of four-belt fights with a shocking victory over former undisputed champion Teofimo Lopez in November.

In between, Alvarez scored an 11th-round TKO of Caleb Plant to become the undisputed super middleweight champion earlier that month, the first time boxing’s top star has accomplished the feat in any weight class.

The thrilling July battle between Jermell Charlo and Brian Castano failed to crown an undisputed junior middleweight champion when the fight was scored a draw in a controversial decision, but the 154-pounders will run it back on Feb. 26.

On that same date in Scotland, Taylor will defend all four of his 140-pound belts against Jack Catterall.

Those bouts could be the first of many undisputed title fights if 2022 is anything like its predecessor.

Stephen Fulton shined in a November win by decision over Brandon Figueroa to claim a second belt at junior featherweight. A fight between Fulton and Murodjon Akhmadaliev would create an undisputed ruler at 122 pounds.

The biggest undisputed title fight of all, of course, would feature Fury against the winner of Usyk-Joshua 2.

Heavyweight remains boxing’s glamor division, but the hottest weight class in the sport is undoubtedly 135 pounds.

The action kicked off in November with the long-awaited fight between Lopez and Kambosos. Long-awaited because the date moved eight times, not because of what was expected in the ring.

What many predicted would be a Lopez rout turned into a breakthrough victory for Kambosos, who floored the champion in the opening round and survived a 10th-round knockdown to turn the lightweight division upside down.

There were three more high-stakes bouts in the division over the next two weeks, and Kambosos attended two of them before returning home to Australia.

First, he was ringside in Las Vegas for Devin Haney’s career-best performance, a decision victory over Joseph Diaz Jr. that featured some rocky moments late in the fight for the rising star. One day later, Kambosos was in Los Angeles for Gervonta Davis’ struggle with late replacement Isaac Cruz.

Perhaps the best lightweight of all competed last, as Vasiliy Lomachenko defeated Richard Commey in a dominant decision. Lomachenko scored a seventh-round knockdown but instead of finishing his foe, he signaled for his opponent’s corner to stop the fight — which it did not.

In 2022 we’ll see who Kambosos defends his four titles against next. Will it be Haney, Davis or Lomachenko? Or maybe even Garcia, who scored his own impressive victory in January, the seventh-round stoppage of Campbell, and is now recovered from wrist surgery?

Whomever Kambosos chooses, the lightweight division should feature even bigger fights in 2022, even with Lopez seemingly headed to junior welterweight.

Crawford finally lured one of PBC’s vaunted welterweights into the ring, but it will likely end up being Bud’s last fight with the promoter.

After Crawford stopped Porter in Round 10, he made it seem like his long run with Bob Arum had reached its conclusion. With the legendary promoter sitting next to him and his deal with Top Rank expired, Crawford said he’s “pretty sure my decision is made already.

If this is indeed the end for Crawford and Arum, it doesn’t come as a surprise. Ahead of Crawford’s November 2020 win over Kell Brook, Arum cast doubt on the prospects of a long-term relationship.

“The question is, ‘Do we want to keep him?”’ Arum told The Athletic. “I could build a house in Beverly Hills on the money I’ve lost on him in the last three fights.”

Crawford earned tens of millions during his career with Top Rank, but the biggest purse came in November, a $6 million payday for his win over Porter.

No matter what Crawford does next, the aim remains the same: a fight with Spence.

Now recovered from the detached retina that derailed his planned August bout with Pacquiao, Spence is set to fight Ugas in March or April with three welterweight titles on the line.

With Crawford as a promotional and network free agent, a matchup with Spence should be easier to make. There’s also Keith Thurman, who like Spence, is aligned with PBC. The former unified champion will end a 31-month layoff when he takes on Mario Barrios on Feb. 5.

But the man Crawford fights next could end up being Taylor — if he takes care of Catterall. Taylor is a large 140-pounder who has expressed a willingness to jump to 147 pounds in the near future. And like Crawford, Taylor is advised by Daniel Kinahan.