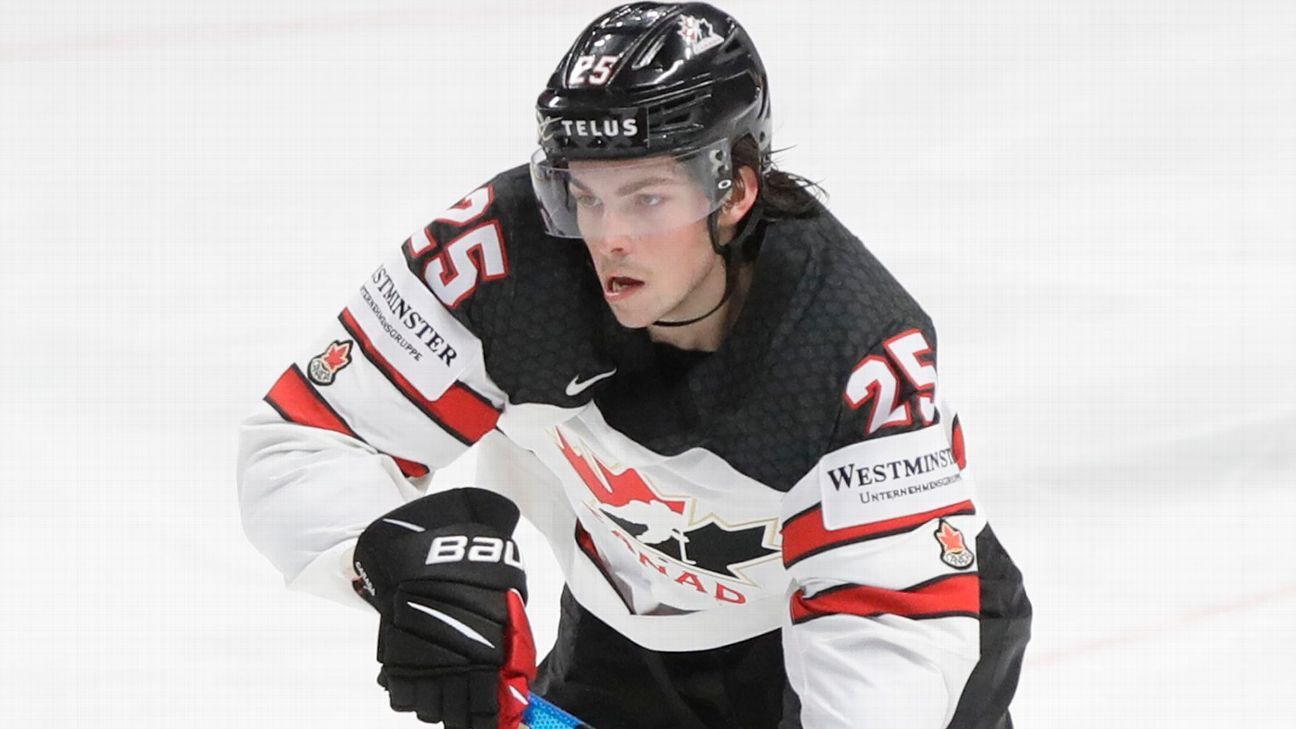 The World Junior Championship is a holiday hockey tradition like no other. And it should look a little different this year.

Due to COVID-19 concerns, the 2021 tournament was moved to Edmonton, Alberta, and played in “bubble” conditions with no fans allowed to watch the proceedings. This year, Edmonton and Red Deer, Alberta, have been playing host to teams from around the world and the tournament will at least be allowed 50% capacity for spectators when games begin on Sunday.

And organizers have been quick to pivot in all areas amid mounting COVID-19 cases.

One change was that the IIHF cancelled most of the pre-tournament schedule (which was set to begin last Sunday) and each team will play in just one game on Thursday before the preliminary round action starts.

All eyes will of course be on the tournament’s perennial favorites from the U.S. and Canada. Those countries highlight the two groups of participating nations: Group A has Canada, Finland, Germany, Czechia and Austria, while Group B is the U.S., Russia, Sweden, Slovakia and Switzerland.

Austria retained its place in a top division despite finishing in 10th place last year. Normally, it would have faced relegation, but the cancellation of various U20 tournaments altered regulations for this year.

The top four teams from each group will play in the quarterfinals, starting on Jan. 2. That will be followed by the semifinals on Jan. 4, and the gold and bronze medal games on Jan. 5.

Before things get rolling, we’re checking in on some of the major storylines and more intriguing players populating this year’s tournament. As hockey fans know, there is no comparison for the drama the World Juniors can bring.

That marked the fifth WJC title for Team USA, along with victories in 2004, 2010, 2013 and 2017. What the U.S. has never accomplished is winning gold in consecutive years. And there’s no time like the present to give it another shot.

Head coach Neal Leaman will be behind the bench again this year, after guiding Team USA to gold in 2021. Leaman has been the men’s coach at Providence College for 11 seasons and won an NCAA title in 2015.

While there is some championship pedigree in Team USA’s ranks from 2021, no one on the roster has played in the NHL yet, compared to three skaters on Team Canada who have logged NHL minutes. Canada was also the last team to win consecutive WJC titles, earning five straight gold medals from 2005 to 2009.

Will the U.S. be next to go back-to-back?

It’s been quite a year already for Owen Power.

Last June, the defensemen helped Canada recover from a 0-3 start at the World Championships and eventually win gold, while averaging over 24 minutes per elimination game.

That performance set Power up for an even better July, when he was selected first overall by Buffalo in the 2021 Entry Draft.

Instead of heading straight for the NHL though, the 19-year-old went back to play at the University of Michigan for this season. Having yet to make his big-league debut, Power could potentially have a historic run at this World Junior tournament. If Canada goes all the way, Power will become the first player to ever secure gold at both World Championships and World Juniors prior to appearing in an NHL game.

The 6-foot-6 blueliner will have plenty of responsibility for the host country once things get underway. Not only is Power a smart defensive player with good instincts, but he’s also got a booming point shot and won’t hesitate to get involved offensively. That’s a lot for any opponent to handle.

Will the competition be able to contain him?

All signs point to Canada’s Shane Wright being the first overall pick in next year’s NHL Entry Draft.

Logan Cooley is expected to be the first American-born player taken and this tournament is a chance for him to show why that is.

The 17-year-old forward is in his second season with the U.S. National Development Team and is one of four Team USA players who are draft-eligible in 2022. There would already have been attention on Cooley’s performance at World Juniors, but the spotlight may be even brighter now that center Thomas Bordeleau was released due to a positive COVID-19 test.

Cooley spent more time on the wing than down the middle at Team USA’s camps over the summer. Losing a top-two center in Bordeleau — who was drafted in the second round, No. 38 overall, by San Jose in 2020 — changes things for the U.S. up front though, and Cooley is a natural choice to get more reps as a potential second-line center.

What sort of impact could a great tournament have on Cooley’s draft prospects? Especially if he can show off strong defensive play as a top-six center? Might be huge.

The last 16-year-old to play for Canada in the World Juniors was some guy named Connor McDavid.

Now there’s another Connor following in his footsteps: Connor Bedard.

This isn’t the first time Bedard has overachieved, either. He was also the first player in Western Hockey League history to ever be granted exceptional status to join the Regina Pats as a 15-year old. So maybe it shouldn’t have been a surprise when Bedard came to camp and was the team’s leading scorer through exhibition play with two goals and four assists.

At this point, Bedard isn’t projected to play a huge role for Canada, but that can change quickly. When Auston Matthews was freshly drafted in 2016, he started as a 13th forward for Team North America in the World Cup. Before long, he was on the top line. These tournaments are short and sweet and just about anything can happen.

How many heads can Bedard turn?

Can an unexpected contender emerge?

It’s easy to wax on about Canada and the U.S.

Let’s not forget about the other eight countries.

Russia took a fourth-place finish in 2021 but projects to have some of the WJC’s best goaltending. Yaroslav Askarov was the No. 11 overall pick by Nashville in 2020 and is playing in his third tournament. Expectations are high that he can backstop the Russians to another medal.

Then there is Sweden, which had a disappointing fifth-place finish last year. It will have defensemen Simon Edvinsson — who was the No. 6 overall pick in 2021 by Detroit — patrolling the blueline and Jesper Wallstedt — the No. 20 overall pick in 2021 — between the pipes. That’s a notable foundation of talent.

There are almost always some surprises along the way at World Juniors, and the looming COVID-19 cloud could change just about anything at any time.

Will there be a Cinderella story this time around? We’ll be watching.