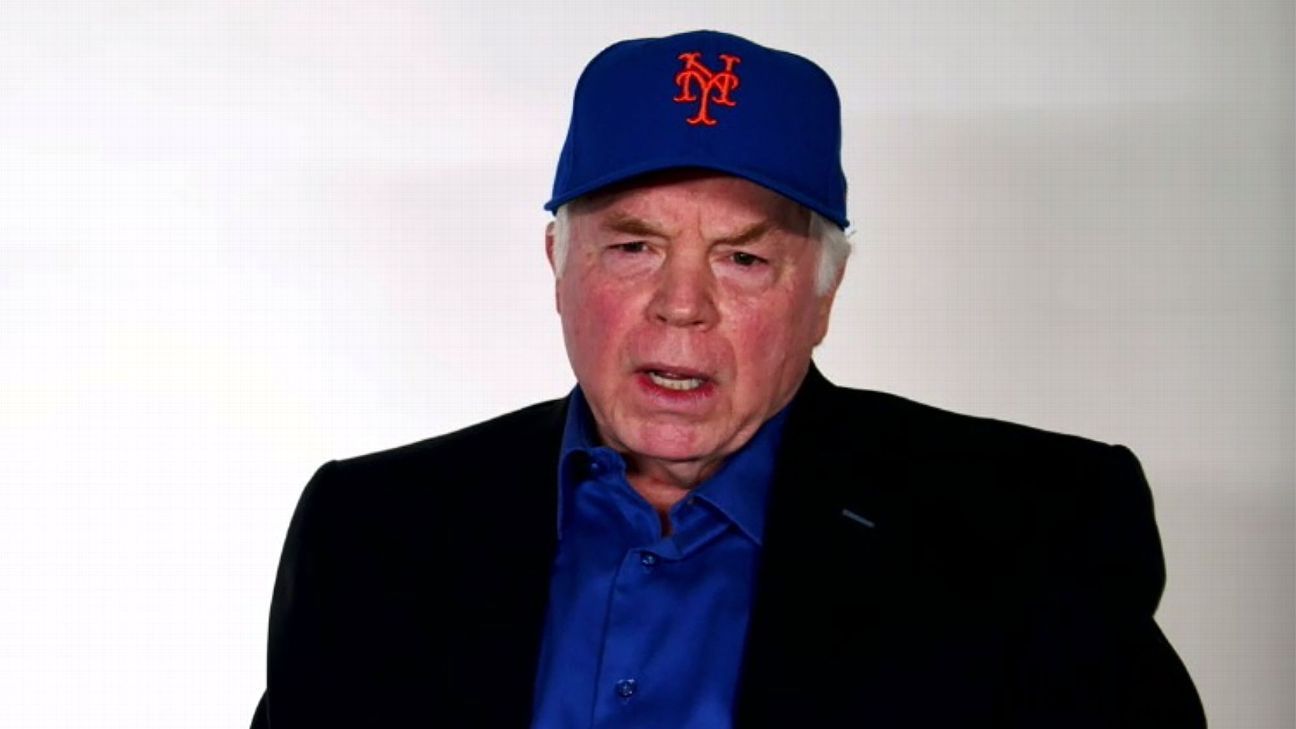 Buck Showalter is 24th on the all-time wins list for managers. He’s managed three different teams to the postseason and is a three-time Manager of the Year. He’s also never won a World Series — and knows what the expectations will be for a Mets team that hasn’t made the playoffs since 2016 but has spent big money this offseason and currently owns the highest payroll in the majors.

“The job description here isn’t to be competitive or try to win more games than you lose. It’s to be the last team standing,” Showalter said Tuesday as he was officially introduced as the new Mets manager. “And not just once.”

Only Dusty Baker and Gene Mauch have won more games without winning a World Series than Showalter, who began his managerial career with the Yankees in 1992, when he was 36 years old. He’s now 65. The Mets finished a disappointing 77-85 in 2021 after leading the NL East in early August and signed Max Scherzer, Starling Marte, Eduardo Escobar and Mark Canha in free agency to create World Series hopes for 2022.

“It’s not something that’s going to define my life, but I can tell you this, it does wake me up every day now,” Showalter said about winning a World Series. He emphasized that he knows that sounds selfish and that the goal is make everyone in the Mets organization successful and impact lives around him. But he knows the ultimate task is to win. That’s the assignment from owner Steve Cohen, team president Sandy Alderson and general manager Billy Eppler.

Showalter last managed the Orioles in 2018, and while he’s been around the game as a television commentator, he also knows the game has changed a lot in just a few short years, with more analytics and more numbers and new strategies.

“If somebody thinks I’m going to go back to the hotel or the house and think that maybe we got beat because someone else had better information or used analytics better than we did, then you don’t know me very well,” Showalter said.

He told the story of managing in the Florida State League and having his wife, Angela, chart where hitters would hit the ball.

“We used to shift players based on six at-bats, now we do it on 600. I still have those charts,” he said, laughing.

Eppler talked to a wide range of people in the hiring process, talking to former players, coaches and general managers connected to the final candidates. He did not, however, talk to any active players because contact between teams and players is prohibited during the lockout. In other words, he did not talk to Scherzer, although reports surfaced earlier in December that Scherzer made it known that he preferred Showalter get the job.

“It was Buck’s ability to connect to a wide range of people, his drive to compete, his curiosity blended with his experience and his overall adaptability that led us to naming him manager of the New York Mets,” Eppler said.

Showalter, showcasing an ability to play along with the New York media that Callaway and Rojas lacked, even joked that his age shouldn’t be a problem in connecting with the players.

“I’ll know what music they’re listening to. You might be surprised at some of the songs I’ll be humming around the locker room,” he said.

He did say he reached out to fellow active veteran managers Baker, Tony La Russa and Joe Maddon.

“I wanted to pick their brains about what I can expect, what might be different,” he said. “It’s not like I’ve been out for 10 years. I’ve been pretty connected through television. But I’m anxious to see. I do think you have to do certain things the same way.”

“The Mets are very precious to the fans,” he said. “They’re precious to me. It’s a great charge to keep what we have ahead of us. It’s going to be a priority from day one to put a product out there that people can be proud of.”