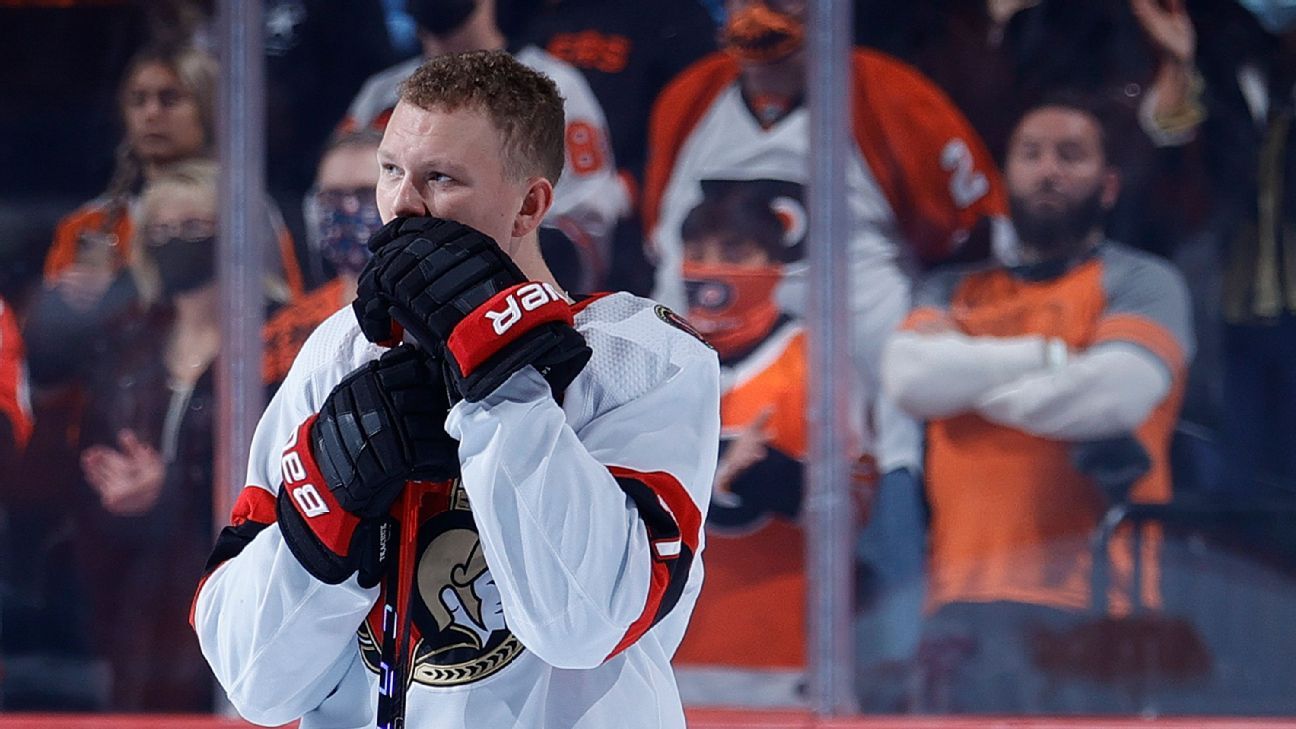 The headlines on Monday night were stark, if unsurprising: The NHL was going to pause the 2021-22 season Wednesday, and resume after Christmas break, amid a spike in COVID-19 cases. This followed a flurry of team shutdowns that left a diminishing number of games on the schedule.

In the aftermath, we’re left with several questions: How will teams get “unpaused”? Will there be a change in protocols? How does this impact the Olympics and All-Star Weekend?

NHL reporters Emily Kaplan, Kristen Shilton and Greg Wyshynski dive into those questions and more to get you up to speed.

Why did the NHL decide to do this now?

Emily Kaplan: The NHL was getting ravaged by COVID-19 outbreaks. This week, 11 different teams had to suspend operations. As of Monday evening, more than 15% of players were on the league’s COVID-19 protocol list. And there was already a wave of postponements (49, to be exact) including the entire Wednesday night slate of games.

Though the NHL and NHLPA desperately tried to avoid a pause, it became inevitable. Since the schedule was so uneven, the NHL and NHLPA believed it was fair to have all teams on the same playing field with a few extra days off over the Christmas break, hopefully to recover. “Competitive balance” is a core belief for commissioner Gary Bettman.

The pause may have started even sooner, but there were only two games left scheduled for Tuesday: Capitals at Flyers (which was later announced as postponed on Tuesday afternoon) and Lightning at Golden Knights. The latter game will go on, pending test results on Tuesday. (The NHL moved into a daily testing cadence this week.)

As for guidance over the next several days, the NHL and NHLPA are not restricting travel for players over the Christmas break. However, they are recommending players avoid dining at restaurants (unless in a private area), and take appropriate precautions, like wearing masks indoors and avoiding public transportation.

When will games start again, and what needs to happen for a team to be ‘unpaused’?

Kristen Shilton: As of this writing, games are set to resume Monday.

There hasn’t been a specific mandate set forth with exact qualifications for teams to pick up activities again, but we have seen certain patterns emerge on that front. Calgary, which had 19 players and several staff members test positive at the peak of its outbreak, reopened its facilities this week to those who had tested negative after several days in which the club returned no positive tests.

So first and foremost, in order for teams to be getting back on the ice, they first must have any COVID-19-related issues under control. There can be no active spread of the virus, and they must be following all of the NHL’s enhanced protocols and local health guidelines.

Another concern was having rosters that remained properly competitive, and with too many players unavailable, that just wasn’t the case in some instances.

New Jersey Devils general manager Tom Fitzgerald spoke to the media Monday after his team, which has five players in COVID-19 protocols, had its game against Pittsburgh on Tuesday postponed.

“It’s been well-documented that we have a lot of sick players,” Fitzgerald said. “Bronchial things, common colds, head colds, things that players do play through. But when you lose the players we have lost to COVID, you’re stretching players out. On top of that, you don’t have the access to call up the quality people we want to call up from [the Devils’ AHL affiliate in] Utica.”

Fitzgerald said that since COVID-19 issues have been so widespread (the Utica Comets have also returned a number of positive cases) and affected New Jersey’s entire organization, it just didn’t feel right to be playing NHL games with a limited lineup.

“It is frustrating when you feel handcuffed because of the situation in Utica,” Fitzgerald said. “We called two players up on Friday night to play Saturday. One popped a positive [COVID test] and the other was deemed a close contact.”

On top of that, Fitzgerald said there had to be thought given to a player’s long-term health. The Devils possibly could have gotten three players who tested positive back for Tuesday’s game, but would pushing them that quickly after 10 days off the ice be the right move? He didn’t think so.

When the schedule does pick up again, teams will have to look at how many healthy players they have, and what impact COVID-19 has had on individuals.

Will the NHL think about changing some of the return-to-play protocols like the NFL is discussing?

Greg Wyshynski: The NFL and NFLPA negotiated changes to their COVID-19 protocols that included the end of weekly testing for asymptomatic vaccinated players, in favor of “strategic and targeted testing.” In addition, players can volunteer to be tested and will be provided home test kits.

If a fully vaccinated player reports feeling symptoms, he must isolate immediately and will not be permitted to interact with the team until producing a negative test.

This new testing regime was preceded by an overall change in the NFL’s return-to-play protocols. Previously, a vaccinated player who tested positive for COVID-19 had to produce two negative tests 24 hours apart before returning to the team. The updated protocols use a new metric called “cycle threshold” (CT) that measures the viral load of a player — essentially measuring whether or not a player is still contagious even if he tests positive.

The driving philosophy behind these changes, according to NFL commissioner Roger Goodell: The omicron variant isn’t nearly as threatening to players’ health as previous variants, especially in light of vaccinations and boosters.

“Our experience with the Omicron variant is fully consistent with this expectation — while more players and staff are testing positive, roughly two-thirds of those individuals are asymptomatic, most of the remaining individuals have only mild symptoms, and the virus appears to clear positive individuals more rapidly than was true with the Delta and other variants. In many respects, Omicron appears to be a very different illness from the one we first confronted in the spring of 2020,” he wrote in a leaguewide memo.

Will the NHL seek to adopt these standards? At the moment, the league is going in a more conservative direction, announcing on Saturday that it would implement daily testing for all players and enhanced COVID-19 protocols. These are essentially the protocols the NHL would apply to teams this season when there were “mini-clusters” of outbreaks.

It’s expected the NHL will allow these new protocols to play out for a bit after the Christmas pause, with an evaluation of their impact no later than Jan. 7.

Like Goodell, NHL executives have acknowledged there’s a difference between COVID-19 infections now versus at the start of the pandemic. Deputy commissioner Bill Daly said vaccines are “preventing serious illness” for players. “While we have some symptomatic players and some players under the weather, they’re not getting sick like they were last year,” Daly said. “That’s a direct effect of being fully vaccinated.”

Unlike the NFL, the NHL has to deal with the Canadian government, and there is a belief that provincial governments would not be on board with lesser testing requirements, especially for players traveling into the country.

What do the players want from the NHL’s COVID-19 protocols?

Greg Wyshynski: The players I’ve spoken with are in favor of the NHL finding ways to get players out of the protocols faster, including the adoption of the NFL’s tests for how contagious they are.

“I haven’t talked to a single guy that didn’t want to see changes in the protocols,” said one NHL veteran. “The bottom line is we need to get these guys back into the lineup quicker.”

Some players have noted the outbreak on the Calgary Flames as an example. The Flames had 19 players in the NHL COVID-19 protocols and had all their games postponed through to Christmas. But Flames head physician Dr. Ian Auld said “overwhelmingly, our cases so far have been either asymptomatic or mildly symptomatic,” with players recovering after 36-48 hours.

“We’ve all gotten vaccinated. Some of us triple-vaccinated with the booster,” said one NHL veteran. “We test every single day. We’re spending millions of dollars, and for what? To tell a guy that says he feels fine that he can’t play for 10-12 days?”

What we’re hearing more from the players is a desire to treat COVID-19 “like an illness”: Players that are under the weather stay out of the lineup until they’re feeling better, instead of a test telling them when they can come back.

What does all of this mean for NHL players going to the Olympics?

Emily Kaplan: The NHL has until Jan. 10 to opt out of Olympic participation without financial penalty. Gary Bettman was never a huge fan of sending players to these Olympics, but he made an agreement with the NHLPA during the last rounds of collective bargaining and intended to see that agreement through in good faith. There was only one way the NHL was going to exercise the opt-out clause: If the season had been “materially impacted” by COVID-19 postponements.

Well, now that there are 49 total postponements, sources say the league views that as a material impact. The league will now need the three-week Olympic break — or at least part of it — to make up those games. According to sources, the NHL will announce (perhaps as early as this week) that players are not going to the Olympics.

Said one veteran player who was likely going to make the roster for Team USA: “It’s a huge letdown, because this is a once-in-a-lifetime opportunity for so many guys, you don’t know if you’ll get that chance again. Obviously we get it and this was always a possibility. It just sucks because we were so close.”

The Olympic rosters will now be filled with amateur players and professionals playing in leagues outside the NHL. The NHL did not send players to the 2018 Olympics in Pyeongchang, ending a run of five consecutive Olympics. However, the good news for NHL players is that in the most recent CBA, they also negotiated for participation in the 2026 Olympics, which will be held in Italy.

Does this have any impact on NHL All-Star Weekend?

Greg Wyshynski: Given everything else on their plates, the NHL and NHLPA haven’t had any salient discussions about the fate of NHL All-Star Weekend in Las Vegas quite yet. The skills competition is set for Feb. 4, and the All-Star Game is set for Feb. 5. As of last week, it was still all systems go: Tickets to the All-Star Fan Fair at the Las Vegas Convention Center went on sale on Dec. 17.

However, if conditions remain the same or worsen regarding the NHL and COVID-19, sources told ESPN that there would be discussions about the event’s status, given that it would bring players from all over the league together in one location. (Full disclosure: ESPN and ABC will broadcast NHL All-Star Weekend.)