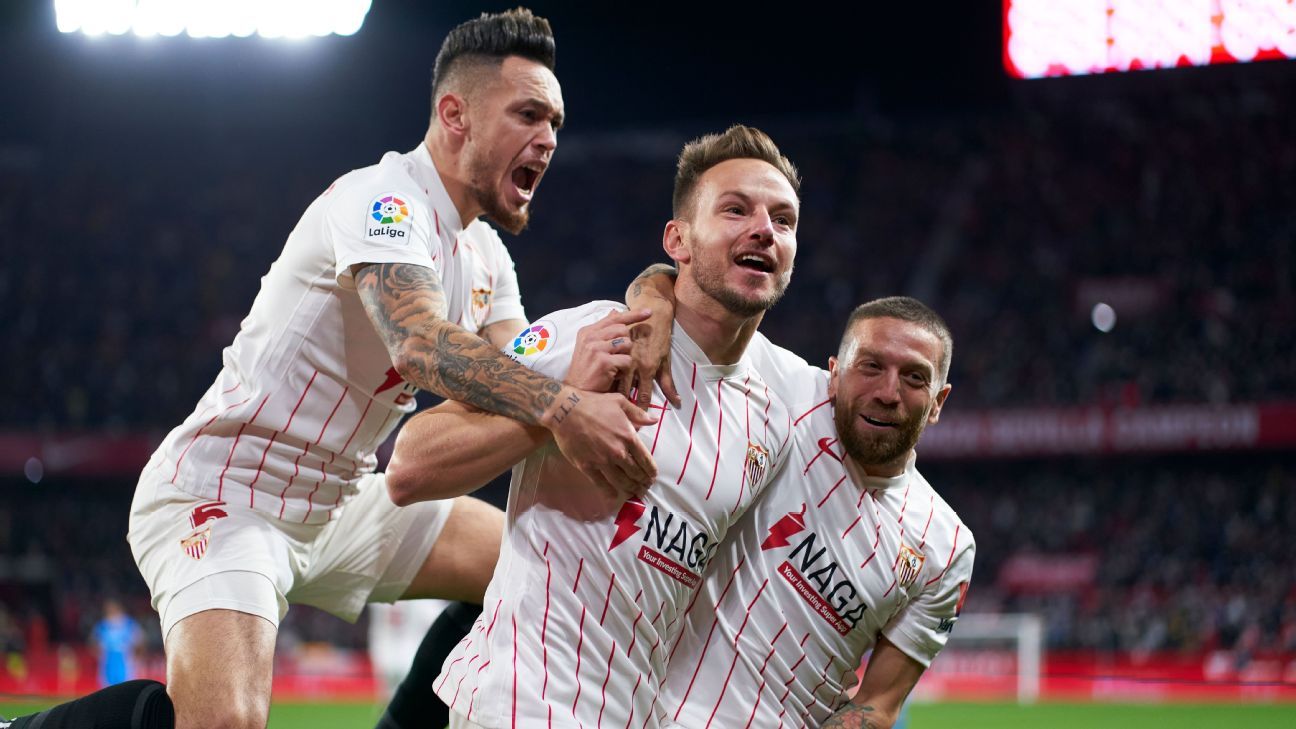 Barcelona manager Xavi Hernandez won’t be popular at Sevilla, and that has nothing to do with whether he inspires his squad of talented youngsters and downbeat senior pros to a slightly unlikely looking victory over Los Rojiblancos at the Estadio Ramon Sanchez Pizjuan on Tuesday (3 p.m. ET, stream live on ESPN+).

When the Catalan — who, as a player, did so much to keep domestic trophies tantalisingly out of reach for great Sevilla sides variously starring Freddie Kanoute, Luis Fabiano, Ivan Rakitic, Jose Antonio Reyes, Jesus Navas, Adriano, Sergio Ramos, Julio Baptista and Dani Alves — was asked about Tuesday’s rivals, he stated a plain fact: “Sevilla were close to being champions last season and they are in shape to win the league this year.”

It’s refreshing to hear the concept get some air time, particularly after a fortnight when Real Madrid have threatened to to turn the competition into a one-horse race. However, in confronting plain facts and then telling the truth, Xavi trampled all over a vibe that has become a binding instruction both at the Sanchez Pizjuan and the Ramon Cisneros Palacios Training Complex: “We do not speak about winning the title!”

Work has taken me to Sevilla a couple of times this season, to interview guys like Jules Kounde, Thomas Delaney, Youssef En Nesyri, Bono and, last week, that was backed up by a telephone interview with Monchi. These are talented, interesting, characterful people, well worth talking football with. What linked all those conversations, plus any chit-chat with the club’s media department or training ground staff, was the seemingly total ban on honest answers about this being Sevilla’s biggest chance to land the Spanish title for the first time since 1946.

On each occasion when I ventured the idea that Atletico Madrid and Barcelona were in serious transition mode (plus afflicted by nasty injury lists), then added that Real Madrid were stronger but lacked sufficient goals to make them a shoo-in for the title, faces blanked over and eyebrows were raised in a “do not mention this subject” manner.

The responses were superstitious to their core. It just about reached the stage of club employees nervously looking over their shoulders in a fearful check to make sure nobody had overheard and misconstrued the conversation, thinking that it was them, rather than me, who’d raised the forbidden subject. Some of them laughed the question off, others changed the subject. None of them dared to say: “Yes, if we do things correctly from now until May, this can be our year.”

Football is an ultra-suspicious, superstitious world. Almost everyone fears, consciously or subconsciously, that you can get “above yourself,” that there’s some greater football god who maliciously punishes hope, and ambition, if dreams are spoken about too passionately, too often, too openly.

You know the saying about not touching the cup before you’ve won it? Teams stroll out onto the pitch where a final is being held, usually walking past the silverware that they all crave, and it’s widely held — in this crazy, loveable, eccentric society of myths, superstitions and imagined taboos — that the simple act of touching the trophy as you walk past it is an absolute guarantee not only that your team will lose the final, but that a red card or an injury or an own goal is also on its way for the sinner.

The sentiment at Sevilla is from the same family of daft logic.

The idea goes: Say that “We’ve got a fighting chance of winning the title because our squad can wage war on Madrid right up until the tape,” and catastrophe will inevitably follow. Xavi, not afflicted by this curse, did everyone at Sevilla a big favour by hitting the nail on the head when he described them.

“Sevilla are good enough to win any competition they are in right now, including LaLiga,” he said. “They’ve become a huge club, they have a spectacular squad, they are a reference for any club, us in particular, in how they sign, how they coach, how they scout.

“Monchi (Sevilla’s world-famous, world-class director of football) has a philosophy which should be an example for all of us, Julen Lopetegui is one of Spain‘s great coaches … and if they beat us they’ll go just three points behind Madrid at the top of the table.”

Xavi did Sevilla a big favour because there are times when it’s important to shrug off football’s meaningless, but deeply ingrained, superstitions and stick your chest out. This is one of those times, not a moment to hide meekly behind genteel manners and bat away propositions that greatness awaits.

Barca and Madrid are thorns in Lopetegui’s side. Right now they have the upper hand, psychologically as much as in football terms. Sevilla and Lopetegui need to puncture that.

In his third season at this remarkable, ambitious and robust club, he keeps flirting with the idea of stamping Sevilla’s authority all over the country’s premier duo. But he keeps coming up short.

The passionate and ultra-late win over Atleti on Saturday was just an extension of Sevilla’s recent habit of winning or drawing against Spain’s reigning champions; one defeat to the Colchoneros in the past seven Liga meetings. Sevilla have Atleti’s number.

Madrid, not so much. Defeats are narrow, but regular. The 2-1 loss in the capital last month, on night when almost every neutral judge concluded that the Bono, Diego Carlos, Kounde & Co. could — perhaps should — have won, maintained the pattern of Sevilla being close … but no cigar.

Barcelona are a slightly different story.

Although Lopetegui and his bulgingly talented squad lost the Copa del Rey semifinal to the Blaugrana last season, it was after a fully merited 2-0 win in the first leg at home. It took a monumental, Lionel Messi-inspired, extra-time performance at Camp Nou to overturn that lead. Now there’s no Messi.

And this isn’t simply important for the catch-up fixture on Tuesday, the postponed contest from Matchday 4, it’s a general incentive for Lopetegui and his lads to completely abandon their “oppressed minority” tag when playing Barcelona and firmly impose their brand of hard-nosed, physical, hard-running, streetwise football on Xavi’s fledgling team. Lopetegui, against his nature, should be preaching, over and over and over again to his troops: “Barcelona are vulnerable, they don’t have Messi to dig them out of the brown stuff. We can turn them over. We will turn them over. This is our moment.”

This week and again, at Camp Nou, when they meet in April.

They’ve reached their position, Madrid’s only realistic title challengers as LaLiga stands, despite a brutal time of injuries and COVID cases. If you discard Sevilla’s plentiful run-of-the-mill injuries, which all teams suffer, the key debilitating factor for Lopetegui has been the prolonged, simultaneous absences of Navas, Suso, Erik Lamela and, above all, En-Nesyri. Yet Los Rojiblancos sit second and could be breathing pure hostility down Madrid’s necks should they win at home to Barcelona — which Lopetegui should be telling his squad is mandatory. Not desirable, obligatory.

When I spoke to Monchi last week, and raised the subject of Sevilla beginning to act like a club that not only aspires to winning LaLiga but one that states the fact proudly, he changed the subject and did the unusual: He volunteered to me that Sevilla will try to strengthen and add goals in the January transfer market.

That he’s planning to do this despite Sevilla’s financial situation needing to be improved, and despite the club having exited the vastly lucrative Champions League having only earned about half the €80 million they stood to pocket if they’d made it to the quarterfinals, tells you one thing: They believe that adding a better goal supply to their deep, talented, varied and experienced squad (which has the best defensive record in LaLiga) might make them champion material.

Frankly, it’s time they came out and said it. It’s time they stuck out their chests, metaphorically, and told the world that they crave being Spanish champions, that they think they are made of the right stuff. It’s time that they took positive reinforcement from a public statement of bold ambition.

Madrid’s huge achievement of beating Real Sociedad, Athletic Bilbao, Sevilla, Internazionale and then Atletico in little more than a fortnight properly marks them down as the team to beat. It was a massively impressive feat, but the instant that it was achieved, the instant that the buzz departed, lowly Cadiz found it pretty easy to remind us that this, also, is the Madrid that this season lost to Sheriff Tiraspol and Espanyol and drew 0-0 with both Osasuna and Villarreal.

This is not a one-horse title race. Madrid are strong but not impregnable. Right now the other candidates, Atletico and Barcelona, look mired in more difficulties than opportunities.

Sevilla have the right to believe that, with injured players back and a good January market, they can make history and become Spain’s champions for the first time in 76 years. First, though, they have to believe; the precursor to which is telling the world: “Yes we can!”