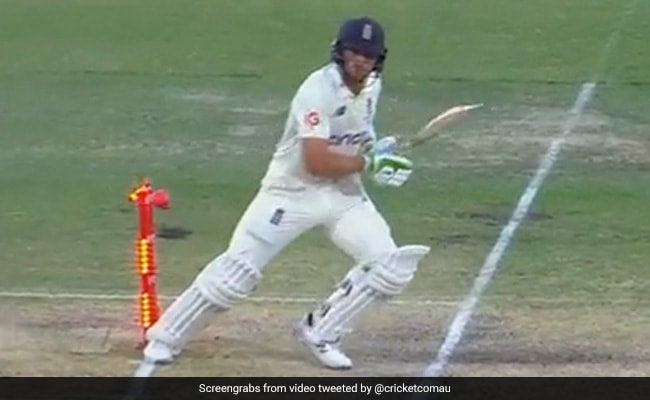 It’s disappointing alright for a batter to get hit-wicket in international cricket but it becomes an entirely different ballgame altogether when that batter has batted over 200 balls with impeccable grit and determination to somehow try and save a Test match for his side. England’s Jos Buttler was that unfortunate one on the final day of the second Ashes Test against Australia in Adelaide. No wonder, England captain Joe Root referred Buttler’s hit-wicket as “heartbreaking.” After all the hard work that Buttler had done, all the patience he had shown, he deserved a better end than a hit-wicket.

It happened in the 110th over of England’s second innings when Buttler, perhaps still thinking about how to survive the remaining 24 overs to salvage an improbable draw with only No. 10 and 11 for company, stepped onto his stumps. There was nothing out of ordinary in that delivery from Jhye Richardson. Buttler had tapped it towards point quite comfortably off the backfoot. But in the process Buttler had gone so far back that his heels touched the stumps and the bails were dislodged.

It took a while for even the Australian players to realise but when they did all the close-in fielders came running towards Richardson while Buttler, who was actually looking for a quick single, received a shock. The England keeper-batter looked behind to realise the reason for the Australian fielders’ celebration. He had stepped onto the stumps.

“Heartbreaking to see [Buttler] get out like that, it showed the desire you need out here. His mentality in particular was outstanding,” Root told BT Sport after the match.

Australia captain Steve Smith too was impressed with Butler’s fighting knock.  “I think Jos (Buttler) played very well, and played over 200 balls, so it was good resistance along with Woakes and Robbo (Robinson). We wanted to stay calm because it would take a couple of good balls and a couple of wickets to get the win,” Smith said.

Buttler’s battle, however, was not enough to save England as Australia bowled the visitors for 192 to win the second Test by 275 runs and take a 2-0 lead in the five-match series.

“We weren’t brave enough at times to get the ball up there and get them driving. Lessons learnt, we have to be better in the next game,” Root added.

Rugby saved trans player Julie Curtiss, and she won’t let the RFU take it from her
Tortorella writes fans, admits Flyers ‘not there yet’
Menacing charge for Bengals RB Mixon dismissed
Borthwick: England ‘weren’t good at anything’
Ancer leads in Saudi as DJ (back) withdraws