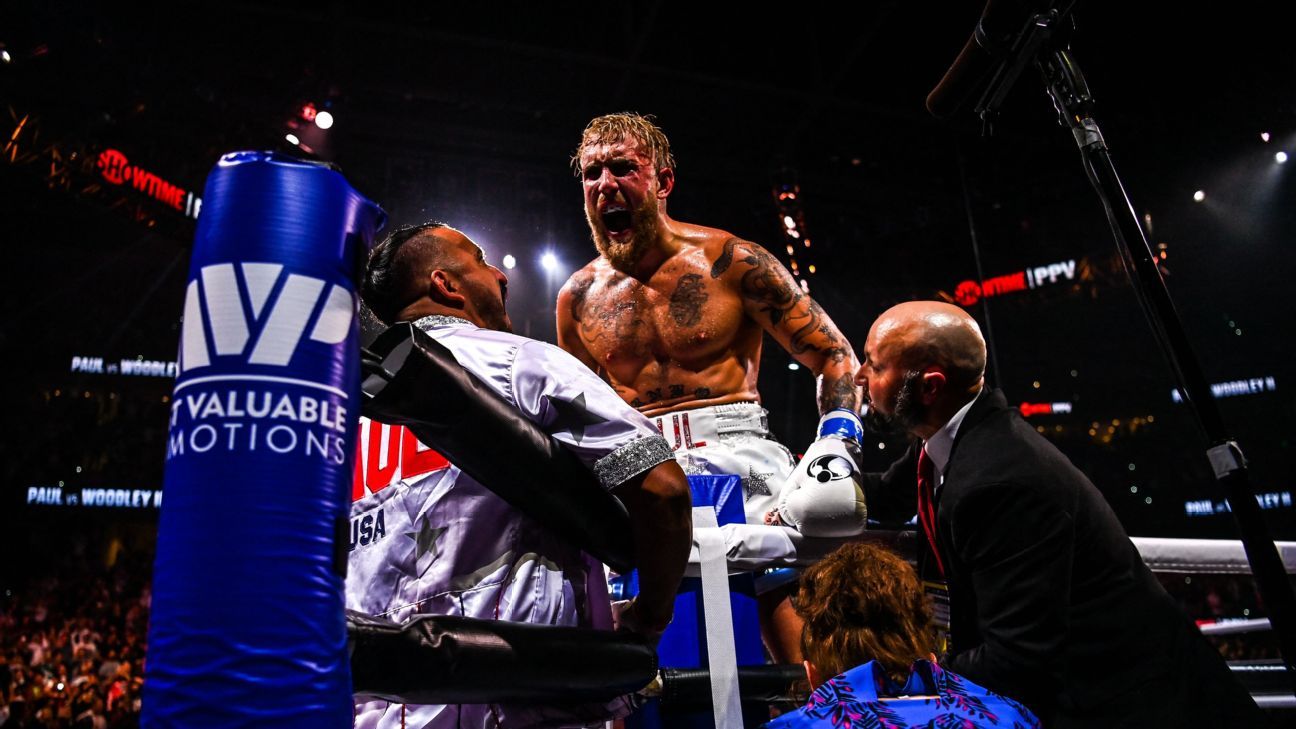 At the time, the longtime NFL star running back thought that he could beat Paul. Gore had been training in boxing for more than a decade to that point. But Gore kept watching. He saw Paul knock out NBA veteran Nate Robinson in November 2020. And then Paul knocked out MMA champion Ben Askren last April.

Gore watched Paul beat former UFC champion Tyron Woodley back in August via split decision. On Saturday, Gore was on the undercard of the Paul vs. Woodley rematch against NBA All Star Deron Williams — and after his fight, he saw Paul knock Woodley out cold in the sixth round.

“Every time he stepped in the ring, bro, he got better and better,” Gore said earlier this week. “They say YouTuber, to now, the guys he beat? You’ve got to take your hat off to this man. I respect what he’s done.”

This has been a year of silencing naysayers for Paul, who is still only 24 years old. Many still exist. And Paul has still yet to fight anyone with real pro boxing experience. But Paul’s massive right hand was an exclamation point on a remarkable stretch. Over the last 12 months, he’s won three times with two knockouts, and perhaps most importantly, he’s emerged as one of the most bankable pay-per-view stars in combat sports.

“Look at what I just did,” Paul said after stopping Woodley in their rematch. “Look at the year I just had. Unprecedented. One of the most valuable boxers in this sport. Four fights. Four massive pay-per-views in 13 months. I’ve knocked out every single person that I’ve fought.”

In addition to what he’s done in the ring, Paul is making a major imprint outside of it. He and adviser Nakisa Bidarian started Most Valuable Promotions, which has promoted both Woodley fights. Like Floyd Mayweather, the biggest box-office star in boxing history, Paul is promoting himself. If you open BoxRec and look at Saturday’s card, one of the promoters listed is “Jake Paul.” Imagine reading any of those last few lines one year ago.

The magnitude of what Paul is doing might have been even more apparent in the co-main event, where Amanda Serrano, ESPN’s No. 3 pound-for-pound women’s boxer, beat Miriam Gutierrez by unanimous decision. Serrano, the first fighter other than Paul on the Most Valuable Promotions roster, has been an excellent fighter for the better part of a decade. But she got a massive ovation Saturday here at Amalie Arena, her social media following has gone through the roof and she’s now staring at perhaps the biggest fight in women’s boxing history next year against Katie Taylor.

Serrano said in the postfight press conference Saturday that she had been offered the Taylor fight before, but the expectation is that at this moment in time, it could be a seven-figure payday.

“The price that was offered [before] was nowhere what we’re getting now,” Serrano said. “Jake Paul definitely helped that.”

Paul has been an advocate for fighter pay and he has become the driving force of this recent trend of novelty boxing, with athletes from MMA facing boxing luminaries, and athletes from other sports and celebrities also getting in on the act.

“Without fighters, there’s no f—ing show,” Woodley said this week. “I think maybe that [started] some different thought processes in these guys to recognize how valuable we are. And really start to see our value. If that’s what it’s doing, then kudos to him.”

Paul’s next move is unclear. Maybe it’ll be a matchup with Tommy Fury, who was supposed to fight Paul on Saturday, but was forced to withdraw two weeks ago due to a broken rib and chest infection. Paul also called out UFC stars Nate Diaz and Jorge Masvidal after beating Woodley on Saturday. He mentioned Mayweather, Conor McGregor, Mike Tyson and even the best fighter in boxing, Canelo Alvarez, earlier this week.

Boxing traditionalists will still treat Paul as a joke. Some of what he does remains juvenile. But it’s hard to ignore the pay-per-view units sold, the attendance numbers (including an extremely young demographic at the fights) and, yes, even the knockouts.

“At some point,” Woodley said, “you’ve got to start putting some respect on Jake’s name.”