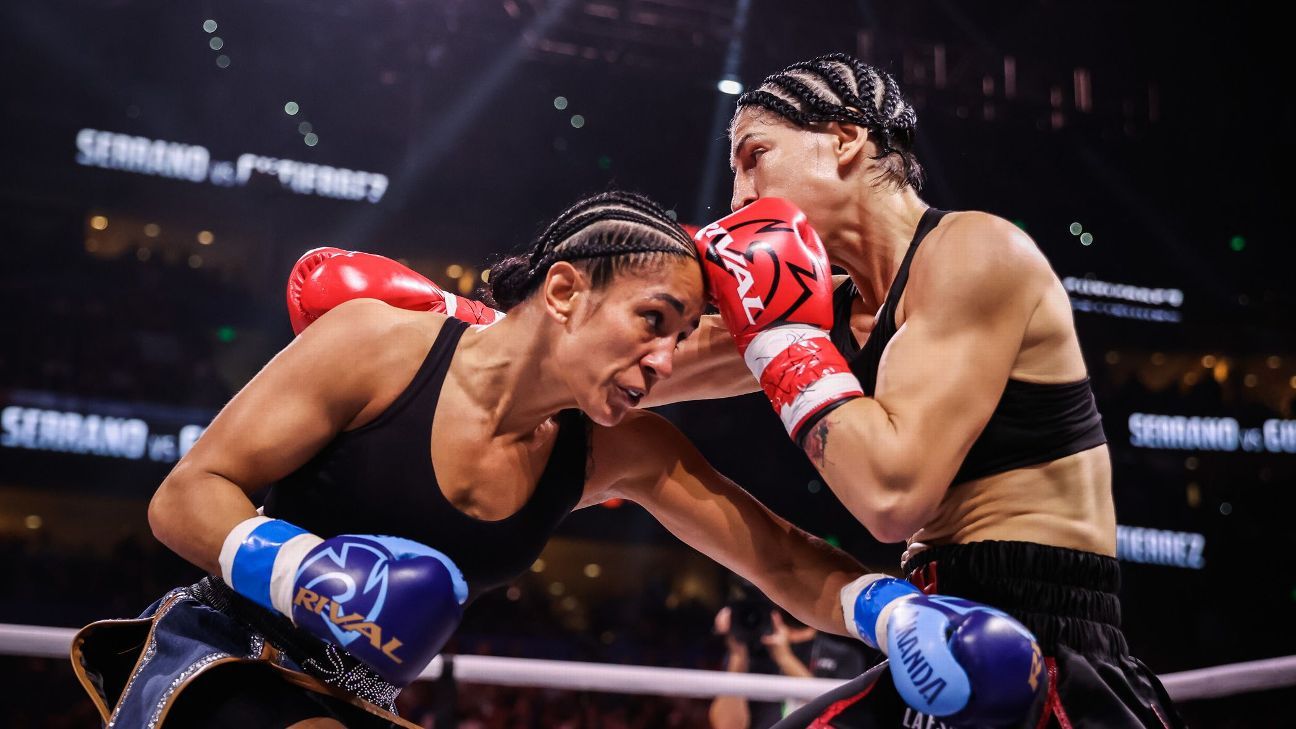 TAMPA, Fla. — Amanda Serrano’s latest win hadn’t been over for a few hours yet, and already she was thinking about what was coming next — the fight that has been, in some ways, years in the making.

Serrano easily bested Miriam Gutierrez on Saturday night inside Amalie Arena, setting up what she hopes is a potential massive fight against undisputed lightweight champion Katie Taylor. It’s a fight that has been discussed several times before but now appears ever so close to becoming a reality in 2022.

“It is the megafight for women’s boxing,” Serrano said. “You have pound-for-pound Top 3, however you look at it.”

While the fight date hasn’t been officially set yet, potential million-dollar purses and a venue of Madison Square Garden have been discussed by both Serrano’s team and Taylor’s.

Before she could think about it, though, she had to beat one more opponent to close out her 2021. In a 100-90, 99-91, 99-90 unanimous decision win over Gutierrez at lightweight, Serrano made it clear she’s one of the best fighters in the world. And by moving up to lightweight for this fight — and fighting as she did — she knows what she wants next.

Serrano moved up in weight for the fight, hiring a nutritionist for the first time and continually enjoying chocolate milkshakes — while enduring eating carrots, among her least favorite foods — to prep. She also sparred with fighters who weighed far more than the 135 pounds she was fighting at — 150-and 160-pounders — in an attempt to prepare for Gutierrez.

The prep work against heavier fighters showed from the opening bell. Serrano landed 46% of her power punches and 236 total punches to 129 for Gutierrez. Almost every round seemed similar to the first, in which Serrano consistently pummeled Gutierrez’s head and body, putting her in the corner and against the ropes several times and looking like she was going to send Gutierrez to the canvas.

Gutierrez held on. Barely. Serrano landed 37 of 86 punches in the first round, a massive 43%, according to Showtime stats, while Gutierrez landed only eight.

“The strategy was to just go out there and just beat her,” Serrano said. “Beat her every single round and dominate her. Just box and show that I’m an all-around fighter. That I could do whatever I want in. I can brawl with her. I can box with her. Body shots, head shots.

“I wanted to be a complete fighter. The knockout, if it came, it came. But I just wanted to make sure that I beat her.”

The next two rounds showed Serrano’s more clinical side. Her pacing was a little slower, but she still went at Gutierrez consistently. Gutierrez rarely seemed to take a step forward throughout the first half of the fight.

“She punches so hard,” Gutierrez said. “And she is consistent.”

It was a master class missing just one thing: the knockout. She bloodied Gutierrez’s nose in the seventh. Sensing opportunity, she continually pounded Gutierrez’s face throughout the seventh round, a constant barrage Gutierrez, from Madrid, seemed fortunate to survive.

Gutierrez appeared to have her best round in the eighth, but even punches that were landing didn’t seem to matter. Serrano would take one punch on her way to landing two on Gutierrez.

The last round was more of the same for Serrano (42-1-1, 30 KO). She backed Gutierrez (14-2, 5 KO) onto the ropes and then landed multiple shots before Gutierrez was able to escape. To Gutierrez’s credit, she held on well despite taking a ton of punishment, including two swollen eyes and a bloody nose.

Meanwhile, Serrano, 33, looked like she just had a long run on the treadmill. And now, she could end up with what she’s hoping for next — the biggest fight of her career. And one Serrano’s co-promoter, Jake Paul, believes can carry a card on its own after her fighting as the co-feature on his past two cards.

“That’s its own main event,” Paul said after his knockout victory over Tyron Woodley in Saturday night’s main event. “For sure. And I’m so excited. I’m going to do everything in my power to make that fight the biggest female boxing fight in the history of the sport.”