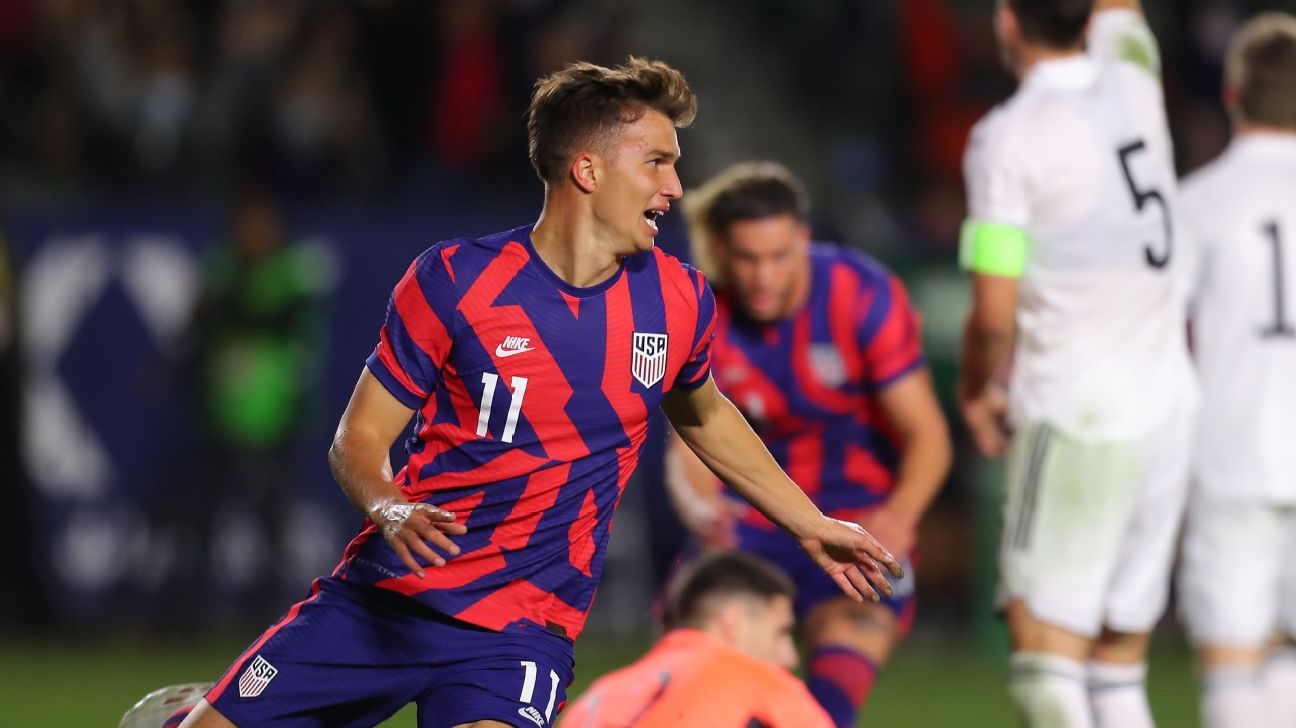 Cole Bassett scored on his United States debut in a 1-0 win over 10-man Bosnia and Herzegovina in Carson, California, on Saturday night.

Jordan Morris, who was making his first start for the U.S. since suffering a knee injury with Swansea City in February, saw a golden opportunity saved just before the half-hour mark.

Bosnia’s Amar Begic was shown a straight red card shortly before half-time after a very rash challenge on Kellyn Acosta to leave his team to play the remainder of the match with 10 players.

A stodgy second half looked to be headed for a goalless draw, but Bassett popped up in the 89th minute to tap in from close range to hand Greg Berhalter’s side the win ahead of a busy World Cup qualifying campaign in 2022 as the World Cup on Qatar looms in December.

Bassett, a 20-year-old midfielder for the Colorado Rapids, slammed home a rebound of a shot by 18-year-old Jonathan Gomez, the former Louisville City defender headed to Real Sociedad. Gomez had also just made his U.S. debut as a second-half substitute.

The newcomers teamed up for a goal that salvaged the Americans’ 17th win of 2021, surpassing the team mark set in 2013.

Four Americans made their national team debuts as a U.S. player group consisting almost exclusively of domestic-based talent finished off its December camp. U.S. manager Berhalter staged the camp to keep his players fit for bigger competitions early next year while attempting to expand the breadth of his player pool.

Bassett’s late goal enlivened a quiet night in the U.S. men’s first appearance since February 2020 at the LA Galaxy’s home stadium in the Los Angeles suburbs. The team is 13-2-3 with 11 shutouts at the venue, currently named Dignity Health Sports Park.

Berhalter has now given debuts to 53 players in his 44 games in charge. That’s the third-most newcomers to get a chance under any coach in U.S. history, and Berhalter did it in many fewer games than Bob Bradley or Bruce Arena.

Atlanta United defender Brooks Lennon started in the U.S. debut for the 24-year-old Arizona native. In the 78th minute, Bassett and 18-year-old defender Cade Cowell came on for their own U.S. debuts. Gomez came on in the 84th minute.

This American lineup struggled to generate a consistent attack against a Bosnian team with eight starters making their first-ever international appearances.

Bosnia already has been eliminated from World Cup qualification, and this exhibition was not in a FIFA window, leaving its federation to field a team of inexperienced players from their top domestic league while international stars like Edin Džeko, Miralem Pjanic, Asmir Begović and Sead Kolasinac stayed in Europe.

Morris looked sharp on several attacks early in the Seattle Sounders forward’s first U.S. appearance in more than two years, bolstering his chances of getting a roster spot for the next round of World Cup qualifiers. He tore a ligament in his left knee in February while on loan with Swansea, but returned to play in three matches for the Sounders.

Ricardo Pepi played the first 62 minutes in his seventh appearance for the U.S. since choosing his birth country over his parents’ native Mexico earlier this year.

Before the game, U.S. Soccer named Chelsea forward Pulisic as its male player of the year and Pepi as its top young player. Pulisic became the youngest three-time winner of the award, joining Landon Donovan (four), Clint Dempsey and Kasey Keller in the three-timers.

Information from the Associated Press was used in this story.