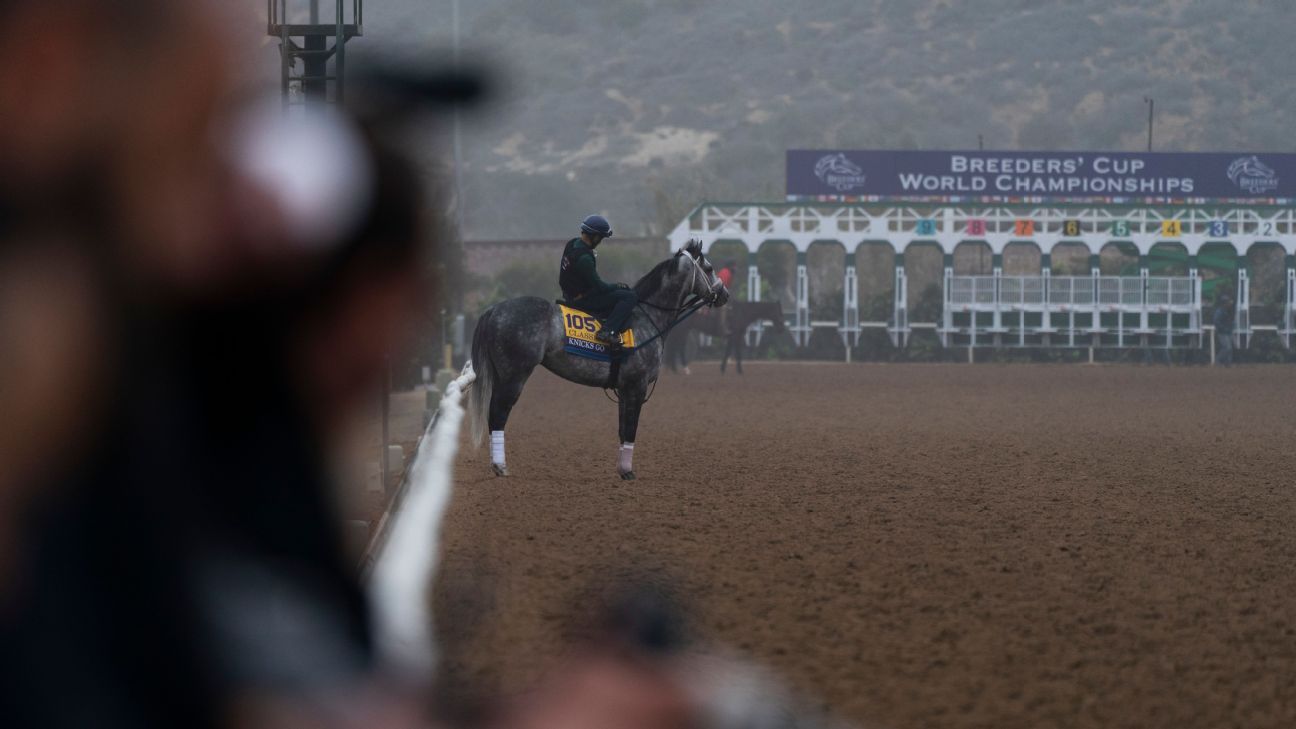 The 38th edition of the Breeders’ Cup will kick off two days of action Friday afternoon at Keeneland.

A lot of eyes will be on the Breeders’ Cup Classic, and with so many high-profile races in the mix, there are numerous opportunities to wager on horses that offer significant value.

Chris “The Bear” Fallica and Anita Marks give us their breakdowns.

Fallica: In a race full of front end speed, I will be looking to the closers on top. (2) Kaufymaker has the potential to be the longest priced of the Wesley Ward runners and that’s always a good thing. (10) Time to Party gets about the best connections you could have in California Turf sprints — Flavien Prat riding for Peter Miller. It’s is second start vs. winners and showed he could sit off the pace in his last start. (7) Armor looks like the best of the Euros to me. I’d be looking to use the latter two for sure in exotics and multi-race wagers.

Fallica: (11) Haughty has run two great races from just off the pace, her first resulting in an unfortunate DQ, but she ran even better in her second start and with the other Chad Brown runner in the field and the Euros in the field, might get forgotten about in the wagering. (6) Hello You won for fun at 7 furlongs at Newmarket and should have no issue stretching out to a mile. (12) Malavath beat the boys last out and should be another sitting just off the leaders at a nice price.

Fallica: (1) Jack Christopher drew the rail and that’s probably not a good thing given he has to stretch out further than he’s run and will be on the lead. I get the feeling (10) Commandperformance will be the trendy upsetter so will tread carefully with him. (4) Pappacap could light the toteboard up. He’s run well at DMR, breaking his maiden here and again when drawing the rail in the Del Mar Futurity and then chased lone speed Corniche in the American Pharaoh.

Marks: The best 2-year-old males in the country compete in this race, and the winner becomes next year’s Kentucky Derby favorite. I like the (1) Jack Christopher to win. His is trainer is Chad Brown and jockey is Jose Ortiz, who is the perfect jockey, considering he drew the inside post. Jack Christopher has the distance and is my pick to win.

Fallica: I’d be very surprised if one of the Appleby runners (1) Modern Games or (2) Albahr didn’t win here. And the best part is you’re still looking at likely a few $10 winner here. (10) Portfolio Company should complete what appears to be a very formful race.

Fallica: (11) Fast Boat ran huge on Oaks Day and then again at Saratoga off the layoff. He was bet to less than 5-1 at Kentucky Downs and didn’t have a great trip at all that day. Drawn outside now, he should get clear sailing to make a late run. (5) Arrest Me Red might fall into a perfect spot sitting right off (3) Golden Pal and (4) Lieutenant Dan.

Fallica: If (5) Life is Good wins, I lose. The lone 3-year old in the field is stepping up big-time in class and despite a win vs. three badly overmatched opponents in the Kelso, he’s no bargain at 4-5. (3) Ginoibili should be with him ever step of the way and is coming off two huge wins over the track. If those two duel themselves into the ground, I’ll also use (7) Snapper Sinclair going turf to dirt and stretching out for trainer Steve Asmussen, who is coming off an unusually cold Keeneland meet.

Fallica: (7) War Like Goddess is a vulnerable favorite here as I don’t see a huge speed duel to set up her awesome late closing kick. She’s the best horse, but the best horse doesn’t always win. There’s a very good chance (1) Going to Vegas is lone speed in here. After Flavien Prat, there isn’t another jockey I want on California turf than Umberto Rispoli. She may get brave and forget to stop. The other which I could see near the lead is (12) Audarya, who may need to send from post 12 to avoid a horror trip. If she breaks and sits second or third, I’d like her chances a whole lot. (4) Rougir would also be on any spread pick four or five tickets, as she is a stalking type.

Fallica: (2) Jackie’s Warrior is entering the race off three straight career-tops and draws inside. He has to be a bet-against here. (3) C Z Rocket hasn’t won since April. but do you really want to leave a Peter Miller sprinter off your ticket at double-digit odds? The last two times (7) Lexitonian was 20-1 in a sprint race, he won the Vanderbilt and just missed on Derby Day in the Churchill Downs. Leave the versatile runner off your tickets at your own risk.

Marks: This race is 6 furlongs, on dirt. (2) Jackie’s Warrior is the one to beat, and I doubt anyone can, considering he is the fastest horse in this field. His only loss was due to a gate issue. I don’t necessarily like the draw, but I love his jockey, Joel Rosario, who will make up for the post spot.

Fallica: (3) Space Blues might be the best bet Saturday given he should be around 3-1 or so. I’ll definitely have press tickets in multi-race wagers with him singled.

Fallica: (6) Letruska is another short-price I will attempt to beat. (2) Royal Flag has never finished out of the money, will get the benefit of a speed-duel and will be close to double-digits. She also just missed vs. Letruska at Saratoga in August. Another Chad Brown runner (11) Dunbar Road was 5th in this race last year, but her form is better entering this race and also just ran two very respectable races vs. the favorite. I’ll probably avoid the three-year olds (3) Malathaat and (5) Clairiere as I’m not sure they are going to offer close to true odds.

Marks: The Distaff is the championships race for the ladies. Whoever wins this race, will be crowned female horse of the year. The race is on dirt for a mile and an 8th. (6) Letruska is the favorite and with good reason, but there will be a ton of competition.

Fallica: (13) Tarnawa won this race last year at Keeneland at close to 5-1 and is a threat to pull the repeat, although 9-5 is a little short for my liking, especially with (3) Domestic Spending in the race. I wouldn’t be surprised if the latter brings Tarnawa’s price above 2-1. I usually am cool on Aidan O’Brien horses here, but (14) Japan will be on my ticket at 20-1. Ryan Moore probably got him beat off the plane in the race at Saratoga and then he was just flat in the second race in the U.S. Moore is back up and I would expect a peak effort here.

Fallica: If (8) Medina Spirit wins, I lose. There’s no way he’s getting a clear lead with faster horses like (5) Knicks Go to his inside. I want to like (6) Art Collector in here, but I just don’t know if Mike Smith can get him to sit. Anyone that’s around for the battle up front, likely won’t be there at the end. But I’ll be using. Sentimentally, I am rooting for (3) Hot Rod Charlie, but he’s adding blinkers and I’m not sure that’s going to allow him to relax. We’ll see. (4) Essential Quality hasn’t made it easy vs. 3-year olds, now he’s got to face elders. He’s probably too short to endorse. (1) Tripoli has a huge shot here at 15-1 for trainer John Sadler. Tripoli was just 5-2 or so vs. Medina Spirit at Santa Anita, had a parking lot trip from an outside post and gets a huge rider upgrade to Irad Ortiz. He won the Pacific Classic at DMR and just missed in the San Diego. He’s a must-use in my book.

Marks: The season all comes down to this. The ultimate championship race of the season. It won’t get more exciting than this $6 million race! Whoever wins is crowned horse of the year! Knicks Go is the favorite and will be the fastest horse in the race. Essential Quality will present a great challenge, after winning 8 of his last 9 races — his only loss was in the Derby. Hot Rod Charlie, is always in the mix, but has fallen short – could this be his day with jockey Flavien Pratt on the reins.